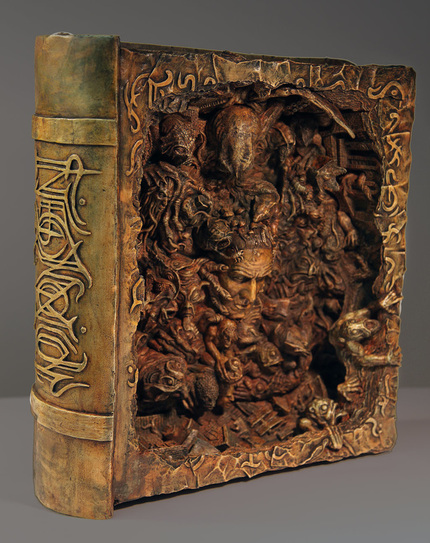 About Marduk And The Necronomicon

One of our readers, Tammie George, brought our attention to some interesting links between Biblical figures, Greek mythology, Samaritan and possibly even the Mayan gods.
If George is correct, all of these ancient societies had access to the same Spirits of the Goetia that were reportedly dealt with by King Solomon.

George caught our attention when she wrote: “I was reading the Book of Fifty Names by Simon, where he talks about Mayan gods, which each god does, and their sigils, which sounds a lot like the Goetia spirits.”
​
She noted that the Goetia Spirit Amon also appears to be included in Egyptian mythology as the sun god Amon Ra. And the Book of Judges, Chapter 10, verse 6, tells how the “Children of Israel” worshiped Baalim, Ashtaroth, “and the gods of Syria . . . and the gods of the children of Ammon.”

Indeed, the Old Testament story admonishes the Hebrew people for worshipping these powerful spirits, and the reference to “the gods of the children of Ammon” suggests some kind of sexual union with non-human entities, possibly through demonic, angelic or alien DNA manipulation.

The Book of Fifty Names is part of a mystery work also known as the Necronomicon. And that is reportedly a dangerous black book written by the pseudonymic “Simon” in which reference is found to the 50 names of spirits that served under the Ancient Samarian god Marduk, their sigils and spells. Are any or all of these listed spirits part of the Goetia?

There is a story that the Necronomicon isn’t ancient at all. The book penned by the individual known as Simon is said to have been the contemporary creation of American author H. P. Lovecraft under the pseudonym “Mad Arab Abdul Alhazred.”

Also significant is that the late magickian and prankster Aleister Crowley participated in the publication of what was known as the Second Edition of this document. In the introduction Crowley wrote:

“Bizarre occurrences and humorous coincidences aside for the moment, the Necronomicon has caused changes in the conscience of those people most intimately involved with it, as well as many strangers who simply bought the book through the mail or at their bookstore.

“Judging by the letters we have received in the last two years, these changes have been startling. Many have found the books’ magick to work, and work extremely well. Others, having once attempted certain of the rituals, felt compelled to retire from the occult “scene” for lengthy periods of time. The mere fact that the book was generally considered never to have existed and then found to exist after all – is itself a powerful psychic influence.”

The story of Marduk is extremely ancient, dating back to the first great Mesopotamian civilization and its first great king, referred to in Genesis as Nimrod, the hunter. Through extensive research we found that Nimrod may have been the Assyrian King Tutulti-Ninurta I, the founder of Nineveh and ruler of the known world within what is now referred to as the Golden Crescent and origin of the first post-deluge civilization.

There is data that supports a story that Ninurta, the great grandson of Noah, and his wife Semiramis established themselves as the gods Marduk and Astarte. According to the story, the construction of the tower of Babel, including the ziggurats throughout Mesopotamia, was connected to the religious system that they established.
​
Semiramis also went down in mythology as the original Mother of God. It was said that after the death of Nimrod, she bore a son, Tammuz. Because she could not have naturally conceived the child from the dead Nimrod, she proclaimed it to have been a miracle conception and that Tammuz was Marduk reborn. The virgin birth story has been repeated throughout history, right up until Jesus was born of the so-called Virgin Mary.

The Book of Fifty Names begins by identifying Marduk as the son of the god figure Enki, “chosen of the Elders to fight Kur and wrest power from the Great Sleeping Serpent who dwells beneath the Mountains of the Scorpion.”

The story explains that Marduk was given “Fifty Powers” as a weapon to help him in this fight. These powers appear to be demonic, or perhaps angelic forces. All are represented by sigils, just like the Goetia Spirits. But none of the names or sigils compare to what we find in the 72 Spirits of the Goetia as identified by Crowley.

It is our conclusion that if the book is really the ancient text some suggest it is, the names do not compare with the 72 Goetia Spirits. Because Crowley was a prankster, and Lovecraft was a powerful writer of great and imaginary fiction heavily linked with the occult, the chances are very good that the book is one big joke on the esoteric world.