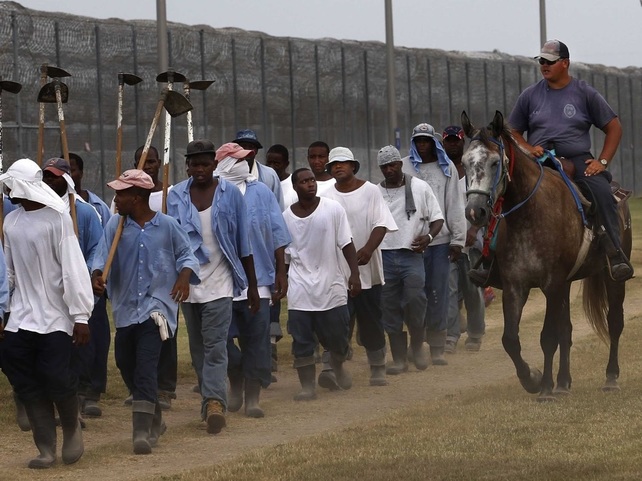 As long as I can remember the people of Michigan sometimes joked about the license plates on their cars being made by the inmates at the state penitentiary at Jackson. In later years we heard about other things like furniture also being manufactured in the prison.

I personally thought that utilizing prison labor to manufacture useful things was a good idea. I thought that it was probably a program designed to offer vocational training, utilize that “wasted” time in lock-up, and give prisoners a chance to earn spending money to buy personal things to make life behind bars more tolerable.
How silly of me to expect prison authorities to do anything humane.

With prisoners all over the United States now rebelling and refusing to work we are beginning to understand what has been silently going on within the nation’s now giant and growing prison system. It appears that we have had a system of forced slave labor occurring right under our noses. It has taken a secret and cleverly organized band of rebellious prisoners centered in Alabama to flush this story out into the open.

Not that the corporate media is helping. Most major news outlets have been ignoring the story; which is only to be expected. But many independent news outlets operating within the Internet are getting the story told; and what we are learning is ugly.

The prisons . . . many of them now privately owned and operated . . . are crowded largely as a result of the nation’s terrible “war on drugs” and legislation that mandates prison terms for merely possessing certain narcotics and even for growing and selling marijuana in some states.

The prisons utilize prison labor to maintain and operate the prisons. This includes food preparation, laundry, and general building maintenance. The prisons also contain factories that produce not only car license plates but car parts, clothing or computer parts.

Some of the jobs the inmates are forced to do are hazardous and involves exposure to toxic chemicals, the workers charge.

The government promotes the prison labor program through UNICOR, an acronym for Federal Prison Industries which uses penal labor from the Federal Bureau of Prisons to produce goods and services. The UNICOR website promotes the program as beneficial to inmates as a jobs-training program.

In reality, according to the prisoners, the program has generated a $500 million a year industry that literally enslaves the workers. They all work for their room and board and other services that eat up any income they might earn, which is usually only something like 50 cents per hour. There is no such thing as minimum wage for prisoners. After fines, fees, court costs and housing costs are deducted, there is no money left.

The striking prisoners complain that they have been cleverly caught up in a slave labor system that is a violation of the Thirteenth Amendment. That amendment reads: “Neither slavery nor involuntary servitude, except as a punishment for crime whereof the party shall have been duly convicted, shall exist within the United States, or any place subject to their jurisdiction.”

In spite of harsh confinement and restrictions on contact with the outside world, the prisoners in several Alabama prisons formed an activist group known as Free Alabama Movement which launched what started as a 10-day strike on September 9. The word spread quickly throughout the nation’s prisons and the action has grown.

Prisoners in at least 40 different prisons in 24 states were participating in the strike at last count. The strike is reportedly taking several forms including hunger striking and refusing to work. The prisons are all on “lock-down” to allow guards to keep some order and to perform jobs the prisoners usually carry out.
Because state prison authorities are remaining silent about this issue, getting detailed information, and learning just how effective the strike has been, is almost impossible.

Reporter Amy Goodman in a report for Democracy Now wrote that she managed to get a telephone interview with a spokesman for the Free Alabama Movement. She was told that the group attempted legal recourse through the courts and even attempted to contact state and federal legislators about their concerns. They chose to strike because their concerns have been ignored.