It was while working as a bureau reporter in South Haven, Michigan, that I discovered an old atlas containing the work of surveyor W. B. Hinsdale. Within the book were maps and documentation concerning manufactured earth works throughout southern Michigan and northern Ohio.

I also uncovered a paper published in 1878 by another early Michigan surveyor and geologist, Bela Hubbard, that also described the various earthworks that included mounts, fortresses and garden beds that were so large they sometimes covered thousands of acres.

Hinsdale, a University of Michigan professor, published Primitive Man in Michigan in 1925 in which he identified an estimated 600 mounds that still could be found in Michigan and said he thought at least 500 more had been destroyed.

Hinsdale wrote: “The enclosures, usually known as ‘Indian forts,’ but probably having no connection with military usage, are also vanishing rapidly. It is the duty of the state to locate, measure, photograph and chart these structures before they disappear entirely.”

He told how numerous mounds along the Detroit and Rouge Rivers had been leveled to make way for development. He said one mount, identified as the “Great Mound on the
Rouge” at the junction of the Rouge and Detroit Rivers, was 400 feet long, 200 feet wide and 40 feet high. Unlike most other mounds in the state, this mound was filled with human bones.

The atlas I discovered contained drawings of various artistic shapes that Hubbard identified as “garden beds” for lack of any other description. The atlas also mapped many mounds and earthworks shaped in “U” formations that were described as fortresses. The book contained maps of where these images in the earth were found at the time the first European settlers began moving into Michigan.

Hubbard was a Nineteenth Century naturalist, geologist, surveyor and explorer who helped survey and explore much of the state. It was because of his careful recording of the many odd earth formations found throughout southern Michigan, Northern Ohio and portions of Indiana and Illinois, that this information has been preserved, although not understood. Once the land was settled and cultivated, nearly all of these amazing old images . . . many of them only visible from the air . . . were destroyed.

During my research on these fascinating works I came upon a local researcher, an amateur archeologist who tracked down many of the remaining mounts that still existed in Southwest Michigan. I spent an interesting day with him visiting some of the larger ones that survived because the land on which they existed had never been cultivated. I remember one was so tall it looked like a natural hill, covered with trees, in the midst of a wooded area. Yet when we examined it carefully, the mount was perfectly round at the base.

This researcher, whose name has long been forgotten, told me how archeological digs were conducted at most of the known mounds and that it was determined that they were not built as burial sites. Bones and human artifacts were sometimes found in them, but for the most part, they were just large earth mounts. So the mystery was who built them and why were they built?

None of the Michigan mounds compared to the monster quarter-mile-long Serpent Mount in Southern Ohio. That mound, which averages about three feet in height, appears from the air like an uncoiling snake. It has been preserved by the Ohio Historical Society and today rests in a state financed park.
During the time I worked at the Kalamazoo Gazette, I was pleased to find a mount in Bronson Park in the heart of the city and within a stone’s throw of the newspaper. Because it had been identified as an earthwork in time, the city chose to preserve the mound and build a small park around it.

The Kalamazoo mound wasn’t large. It had a diameter of 58 feet at its base and was just short of five feet in height. Excavations failed to find anything of interest. This mound, however, gained some historical significance because it served as a platform for political figures like Theodore Roosevelt, Stephen A. Douglas and William Jennings Bryant to stand and give public speeches.

Of all the earthworks, the garden beds have remained the biggest mystery. Unfortunately all were destroyed when the land was settled for and found rich for crops. The settlers wasted no time tearing them up for farmland.

Like so many other mystery earthworks throughout the world, the amazingly intricate designs within the garden beds would probably best have been enjoyed when observed from the air. They were all destroyed before the aircraft was invented, however. Had it not been for the careful measurements and descriptive writings of men like Hubbard, even their existence would have been lost. 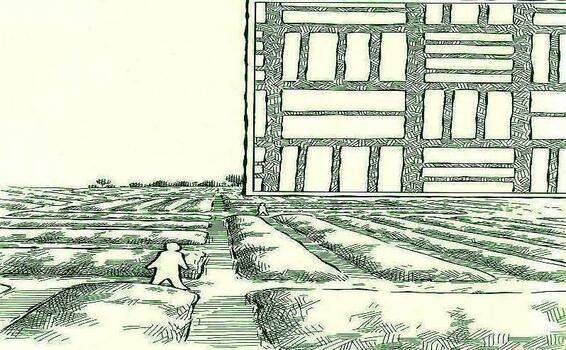 Some beds covered acres of flat land. They consisted of raised patches of ground separated by sunken paths arranged in plats or blocks of various designs. Some of the raised parts ranged from five to sixteen feet in width and ran from twelve to more than 100 feet in length. The height of the raised earth was no more than eighteen inches, thus making the intricate designs easy for destruction by farm instruments.

Hubbard said he found evidence of eight different designs in the garden beds. The individual plats covered vast areas of land, sometimes covering several counties and thousands of acres. Other sites were smaller and covered from 20 to 300 acres.

Hubbard wrote: “the tough sod of the prairie had preserved very sharply all the outlines. According to universal testimony, these beds were laid out and fashioned with skill, order and symmetry which distinguished them from the ordinary operations of agriculture and were combined with some peculiar features that belong to no recognized system of horticultural art.”

Members of the Algonquin nation who occupied the area at the time the first settlers arrived could not explain the earthworks and it was obvious that they had not been the builders. Thus archaeologists concluded that an earlier civilization, identified as the “Mound Builders,” had existed.

The mystery of just who those Mound Builders were, or why they went to so much trouble to build so many amazing earthworks with such intricate design, is perhaps as baffling as the builders of Stonehenge, the Great Pyramids and all of the other massive structures made of giant rocks found all over the world. It is obvious that great civilizations existed that preceded ours. That so many of these ancient works include designs that could only be enjoyed when observed from the air strongly suggests that early humans had the ability to fly, or there was alien contact.

It struck this writer as I personally examined the few remaining mounts to be found on private lands in the state that their shape, and the fact that they were found not to contain human bones, suggested that the mounds weren’t always round lumps of clay and earth as we find them today. I felt they were in some way linked to the same ancient system that drove other civilizations to build pyramid shaped structures not only in Egypt but throughout the Middle East, India, China, and South America.

Were the mounts of the Midwest United States originally designed as pyramids? Perhaps they had flat tops and wooden pyramid-shaped structures were erected on their tops.
​
All of this points back to the oldest mystery within the field of world archaeology. What was the purpose of the pyramids? Who built them, and why were they built?