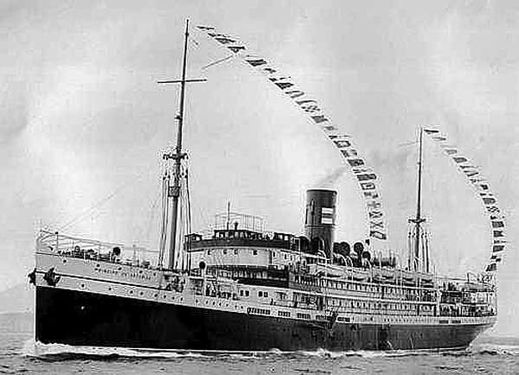 445 Perished In Prince of Asturias Disaster

Many of the 445 passengers and crew members who died on the Spanish liner Principe De Asturias were trapped in their cabins when the 460-foot vessel struck a reef off the coast of Brazil, tore open its bottom and sank in less than five minutes.

Most of the victims were asleep when the disaster happened at 4:20 a.m. on March 5, 1916. The fine two-year-old steamship, the pride of the Pinillos Izquierdo fleet, destroyed itself on the reef while it sliced at full speed through fog on its way from Barcelona to Buenos Aires.

Survivors said the ship hit the rocky outcrop with such force the rushing water caused its boilers to explode. The blast set fire to the ship even as the vessel was capsizing and splitting apart. Even as crew members struggled to launch lifeboats, the wreck plunged to the bottom.

Miraculously there were survivors. Eighty-six crew members and 57 passengers were rescued when the steamer Vega arrived on the scene about eight hours later. Most were in lifeboats launched in the frantic moments before the ship turned on its side and sank in 22 meters of water about 50 miles off shore.

The master of the ship, Captain Jose Lotina, apparently had a foreboding of the impending disaster. Indeed, he knew the ship was getting close to the Brazilian coast and was nervously pacing the bridge, the ship’s fog warning constantly sounding. And just before it struck, he ordered the vessel’s speed reduced and told the helmsman to turn the wheel five degrees to port. He put his glass to the horizon in search of the light at Punta Bay, and worried when it did not appear when he thought it should be.

The only forewarning of the impending danger came when a watchman shouted “It’s land, it’s land!” The helmsman now turned the rudder hard to port and the signal to the engine room ordered “reverse engines,” but it was too late.

The racing liner hit the reef so hard it tore open its steel hull from stem to stern and immediately flooded the engine room. The cold water caused the heated boilers to explode. The blast instantly killed crew members and everyone in that part of the ship, and split the 460-foot ship in half. The wreck quickly capsized as it sank.

Spanish shipwreck historian Fernando G. Echegoven noted that the shock was so violent that it tore through the double bottom of the steel hull. He said the boiler explosions occurred so fast it left the ship without power and unable to use its radios to transmit an S.O.S. He said portions of the ship, in mostly second and third class were actually ablaze as the ship was sinking.

Passengers who were rousted out of their sleep by the horror occurring around them found themselves trapped in the maze of corridors and stairways and did not have time to escape the wreck before it sank. He wrote that the scene had to have been unimaginable; a huge ship adrift and turning over in total darkness as the night was shattered by deafening explosions.

Many of the survivors were wounded when the lifeboat they were launching crashed against the listing hull of the ship when it was caught by the waves.

The French ship Vega came on the scene eight hours later, in broad daylight, when remnants of the disaster were still clearly visible. The crew members said there was a large oil slick in which they saw corpses, smashed remnants of lifeboats, furniture and other flotsam. It was the Vega that picked up the survivors of the Principe De Asturias.
​
The wreck today lies just off Santos, a popular Brazilian resort area, and is a favorite visiting site for sport divers.