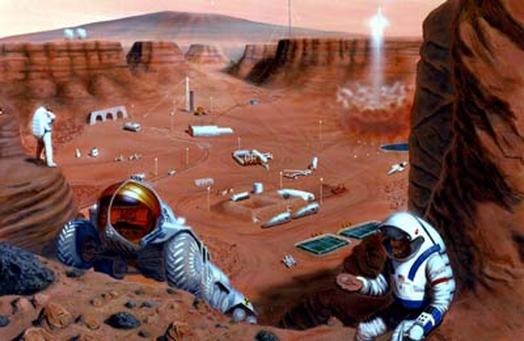 Astronomer’s Call For Colonizing The Stars Not Realistic

Seth Shostak, a senior SETI astronomer, recently issued a call for humanity to plan the colonization of the stars. Shostak’s logic involved looking back in history to how people thought at the time of Christopher Columbus, and the colonizing of the planet that has occurred since.

He noted the parallels between the ocean-going explorers of that era, and today’s space pioneers.

Shostak said the explorers moved from setting out on their first voyages to creating rather accurate maps of the continents in a span of about 50 years. After that humans focused on colonizing the newly discovered lands.

He said astronomers have mimicked the discovery portion of this journey by also producing a map of the Solar System. Astronauts have ventured out on successful travels to the moon and back, and plans are in the works for a trip to Mars.

The mapping of the solar system began in 1965 when Mariner 4 sent back clear pictures of Mars, Shostak said. Since then, astronomers using high-powered new telescopes and various exploration vehicles have delivered stunning pictures of most of the planets and their moons.

The quality of the images and the knowledge we have gained has made it possible for us to target several places in our own universe where we might either find life, or where it might be possible for humans to set up shop, he said.

Indeed, the old dream of colonizing space, once promoted by science fiction writers, has become an even more urgent concept now that science is beginning to understand the ramifications of an overheating, overpopulated and dying Earth. With our inability to collectively agree that a problem even exists, let alone unite to stop the polluting of our environment, our only alternative seems to be to do what man has always done throughout history. Once he destroyed the habitat around him, he moved on to greener pastures.

This time, however, there are no green pastures for us to flee to. Our entire planet is populated and in decay.

Astronomers like Shostak can talk all they want about colonizing the stars, people in NASA already understand that the probabilities of successfully finding another compatible planet for humans to settle are almost nil.

Not only are the planets in our solar system void and uninhabitable, the trip from Earth to reach them is long and fraught with danger. Once there, the travelers must find a source of water, oxygen and food or they will perish. And experimentation with breeding in space has uncovered yet another alarming piece of information. Humans are Earth creatures, and it appears that we must have the gravity of our own planet to successfully copulate. We cannot reproduce in space, and we may not be able to reproduce in the gravity of larger or smaller planets than Earth.

There is yet another difficult problem that astronomers and researchers have uncovered in recent years. It appears that all of our astronauts have already been slammed by galactic cosmic ray radiation.

According to a recent report by NASA, astronauts on the International Space Station could not stay there more than two years before receiving a lifetime limit of deep space radiation. The limit has been only 18 months for women. It is a harsh kind of radiation in deep space that produces a likelihood of cancerous tumors and other health problems.

Thus we appear to be bound to the planet from which we sprang. The Mother Earth is our mother, and she will not allow us to leave unless we can dramatically change the bodies we inhabit to make them capable of surviving the rigors of space. That means possibly moving into robot/computerized bodies or developing more advanced space technology than we already have.

So if we are the children of an alien race, how was that race able to reach us from the stars without running into similar obstacles you may ask. We suggest that they came from the stars as living in different dimensions and being comprised of different stock than humans.

While not of the Earth, our creator used the physical bodies of earth-born creatures to establish the human race. We were meant to evolve here and become a vital part of the universal communication system. It was never our place to leave the planet until we had advanced to the fullness of the planned evolutionary cycle.

While we cannot say that colonizing Mars or perhaps Saturn’s moon that appears to have water is impossible, we believe it is highly improbable that it can be done successfully. Certainly we may not accomplish such a task before time on our own planet has run out.