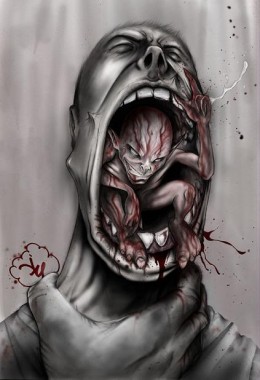 What is wrong with the human race? Why do we kill and plunder and wreak havoc on our fellow man? Where is the love? Philosophers, psychologists, theologians, scientists and sociologists have been trying to find an answer to this question, perhaps for as long as we have existed as a society on this planet.

The problem has always been a simple one. Why can’t we just get along and live in peace with one another? Why do we have inhuman tendencies to physically or socially destroy one another? Where is the love that great teachers like Jesus, Mohammad, the Buddha, and Krishna called upon us to practice?

Biologists suggest that since we evolved from the animal kingdom and are products of the Mother Earth, we are territorial in nature and have a tendency to fight for what is ours, and to distrust anybody that doesn’t look or smell like us.

The religions have invented a devil, or a fallen angel named Lucifer that they say reigns havoc over the Earth, causing humans to fall into temptation. For them, the devil is blamed for all of the havoc occurring in society.

European mythology spoke of vampires or dark creatures that suck the blood of humans and haunt our human psyche.

Among the aboriginal people, the shamans perceive a demonic force, or predator that the late anthropologist Carlos Castaneda said “came from the depths of the cosmos and took over the rule of our lives. Human beings are its prisoners.”

Indeed, as we have helplessly watched the world fall deeper and deeper into chaos, as corporations ravage the planet grabbing up its last remaining resources in a final quest for senseless wealth, as humans commit acts of war, murder and the annihilation of thousands in the name of “ethnic cleansing,” as we witness the senseless and coldhearted acts of government leaders as millions of people go homeless and hungry we have to ask if there is, indeed, a common thread in all of this.

New publications by Paul Levy titled Wetiko: The Greatest Epidemic Sickness Known to Humanity, and Jack D. Forbes, titled Columbus and other Cannibals, are not only putting a new perspective on this problem, but tying together all of the popular belief systems that they suggest have been human attempts to explain what to all of us has been irrational behavior.

Levy ‘s explains that the name in his book title “Wetiko” is a Cree term that refers to “a diabolically wicked person or spirit who terrorizes others.”  He said he and Forbes share a conclusion that there is a strange “psycho-spiritual disease of the soul” that has been plaguing mankind throughout written history and probably from far earlier than this. Levy calls it a “malignant egophrenia.”

Forbes wrote: “The overriding characteristic of the wetiko is that he consumes other human beings; that is, he is a predator and a cannibal. This is the central essence of the disease. . . Wetikos are not in touch with their own humanity and therefore can’t see the humanity in others. Instead they relate to others either as potential prey or as a threat to their dominance.”

He explains that the wetiko personality consumes everything around them “for private purpose or profit, and do so without giving back something from their own lives.”

Forbes lays out examples of this kind of insane consumption as the madness of the oil companies, the “destruction of the Amazonian rainforest (the lungs of our planet) and the wickedness of Monsanto’s work in genetically engineering terminator seeds, making it impossible for the poor farmers of the world to survive.

Both Forbes and Levy believe humanity is infected by a psychic parasite that works “just like certain computer viruses or malware.”  Forbes wrote that he perceives it as a disease that can “program the human bio-computer to think, believe and behave in ways that result in our self-destruction. Wetiko is a virulent, psychic pathogen that insinuates thought-forms into our mind which, when unconsciously enacted, feed it, and ultimately kills its host.”

In other words, we are generally in a self-destruction mode and we don’t realize it. Those of us who perceive the danger we are putting ourselves in cannot understand why we, as a collective society, are choosing to race toward our own extinction. We call out for someone to stop the runaway train while in our daily action we help feed coal to the fire under the boiler.

Levy wrote: “Many of us can’t fathom the level of evil to which full-blown wetikos have fallen prey, and of which they are capable. Our lack of imagination of the evil existing in potential in humanity is a direct reflection of a lack of intimacy with our own potential evil, which enables the malevolence of wetiko to have nearly free rein in our world.”

Castaneda wrote about this malicious energy. He said: “They took over because we are food for them . . . we are their sustenance. Just as we rear chickens in chicken coops . . . the predators rear us in human coops . . . “

Levy carried the Castaneda thought farther when he wrote: “The wetiko virus particularly flourishes in overpopulated cities, where people are ‘coop-ed up.’ When we buy into group-think, and are enlisted as a member of the herd, we become like sheep that are being led over the edge of a cliff, or cattle that are being raised to be slaughtered.”

If Levy, Forbes and Castaneda are correct and humanity is, indeed, stricken with a contagious mental disease that has virtually taken over our thoughts and directs our self-destructive actions, what can we do about it?

It appears obvious that if wetiko exists, it is an alien invasion that occurred on this planet a very long time ago. It has worked hard to keep humanity spiritually misdirected and totally under its control, using false religious systems, materialism, racial bigotry and greed to keep us in a constant state of warfare and fear. We have all grown up in this sickened social system and learned to adapt to demands it places on us. To do otherwise would produce the threat of being shunned and separated from the herd.

The obvious solution is first to recognize the diagnosis, then to drive out the parasite. Since it is a spiritual invader that captures the mind, the battle must be fought within the mind and spirit of each individual. The only real defense here is to follow the spiritual teachings of the old ones like prophets who instruct us to turn on our inner light and reach out to our neighbors in the spirit of unconditional love.

Forgiving the malicious acts of our neighbors, the people who control our lives and the people of other nationalities and nations, then reaching out to them all both mentally and physically in the spirit of love, no matter what they have done unto us, can possibly free us from the parasitic chains that have kept us captive for so long.

This may be the only way to save ourselves from self-annihilation, save our threatened planet, and get on a return path to Eden.