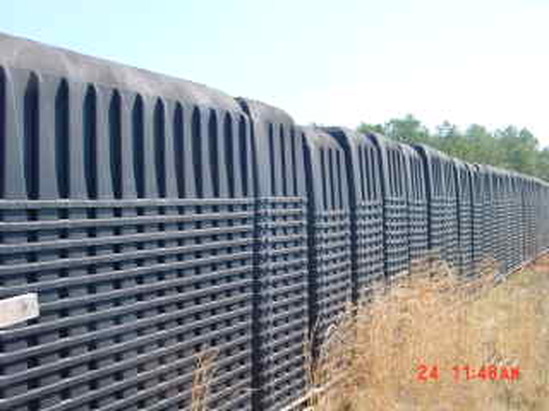 There exists in a field near Madison, Georgia, stacks of large plastic boxes and lids that many believe are the perfect size to serve as human coffins. Video footage showing these boxes can be easily found on U-Tube and other web sites. And from this has emerged yet another in a growing number of American conspiracy theories.

Research appears to have revealed the manufacturer of this field of an estimated 500,000 coffins to be Vantage Products Corporation, a division of Hercules, Inc., and operating in nearby Covington, Georgia. The company specializes in making a variety of industrial products, including burial vaults and other funeral accessories from polypropylene.

Some of the stories on the Internet also attempt to link Polyguard Corporation, of Ennis, Texas, with the mass production of plastic coffins. The stories suggest that the coffins were ordered by FEMA in preparation of a possible catastrophic event that will call for the fast burial of a lot of bodies.

In response to the latter rumor, Debbie Sainz, a spokesperson for Polyguard, issued a public denial of any involvement in the manufacture of the polypropylene vaults observed at the Georgia storage site. Polyguard, she explained, makes a wide variety of industrial products but is not involved in the funeral business.

Without naming Vantage, Sainz did confirm that the Georgia vaults "are manufactured by our competitors in Georgia." She said the vaults are stored on property owned by "the manufacturer" and that there "is no big secret surrounding the vaults. Because of manufacturing costs and the ability to manufacture two parts probably every two to five minutes, once the process begins, to be cost effective, you manufacture until your raw products are gone. This creates inventory that can be rotated and used as needed."

This sounds like a reasonable explanation for the storage of a lot of plastic coffins, all stacked inside one another in piles as high as a man or machine might easily reach, and filling several acres of land near Madison. Yet a writer for Neithercorp web site notes that Vantage boasts on its own website that the company manufactures the vaults at Covington where it has a new facility with ample storage room.

"Why would Vantage store what looks to be a huge portion of their valuable stock in the middle of a field far from their shipping and distribution facility? And why would it sit there undisturbed for years without being rotated, diminished or replenished?" Neithercorp asks.

And so the conspiracy plot emerges.

The coffin conspiracy theorists, led on by such web and radio hosts as Alex Jones, have attempted to link Vantage with Rowan Technology Group, a company that makes industrial incinerators and furnaces and contracts with the Defense Department. The Rowan web site is vague as to the products it makes and any links it has to other manufacturing groups.

Rowan posts a direct association with Hazmat-Alternatives, a company that claims to offer alternatives for disposing of and making defense products safe from hazardous materials. It is logical to assume that the decomposing bodies of a large number of people killed in an atomic blast, from toxic chemicals or a deadly biological or viral pandemic would be considered hazardous material subject to Hazmat removal.

We could not, however, find a link between Vantage and Rowan Technology Group. That does not mean it does not exist or that Rowan doesn’t at least have an agreement to buy polypropylene vaults from Vantage in the event that they are needed. Big corporations have a way of hiding their business connections under layers and layers of corporate links that sometimes takes the help of a room full of high-prices lawyers to peel away.

For example the Vantage parent company was originally Hercules, Inc., of Wilmington, Delaware, when Vantage was founded. Since then, however, Hercules has merged with Ashland Inc., a Fortune 500 company operating internationally. Its main office is strangely based in Covington, Kentucky. Note that Vantage is producing its line of plastic coffins in Covington, Georgia, a suburb of Atlanta.

Ashland, which is probably best known as the maker of Valvoline Motor Oil, owns about 100 facilities around the world, believed to be involved in the development and production of a variety of "bio-based chemicals." The company products include propylene glycol from glycerin, a by-product of biodiesel production.

Hercules may be remembered as a primary producer of gun power used by the military during the two great world wars. The company was originally named Hercules Power Company. That was still its name when Hercules bought the old Huron Milling Company plant at Harbor Beach, Michigan, where my father worked as a chemical engineer. Huron Milling was a major producer of monosodium glutamate, other food seasonings and various wheat starch products. Thus Hercules was obviously expanding its interests after the wars and getting into chemically produced products.

During our research on Ashland we discovered this company was involved in yet another major merger with the big food product maker Cargill in Minnesota which seemed odd to us. In the merger announcement the two big corporations stated: "With a 50-50 ownership structure, Cargill and Ashland will bring to the new venture their unique technology, innovation and expertise in bio-processing, along with chemical formulation, supply chain management and market analysis."

The next statement is more revealing. "We believe the chemical market has reached a tipping point where bio-based and petroleum-based options are both desired by the market and practical to produce.

It appears that these companies have merged to mass produce bio-fuels out of corn and other agricultural products. This has an ominous feel to it since changing world weather patterns and a growing world population is creating a world-wide food shortage. Also the creation of synthetic gasoline from grain for running our automobiles instead of seeking alternative green fuel methods of transportation will do nothing to solve the problem of the carbon dioxide in the air we breathe.

Thus we circle back to the complex intertwining of major world corporations, all of them actively in the business of making their boards of directors and their stockholders very rich at the expense of the rest of us.

It appears as if big business has no interest in changing the status quo for the best interest of the people of this planet. And it is obvious that continuing on the course we are on will, indeed, lead to extreme environmental disasters that will result in the mass deaths of many people.

Most building codes in the United States call for concrete vaults to be built around all of the wooden coffins placed in community cemeteries. The concrete serves to keep the burial site from caving in as the wooden coffin rots away. It also keeps toxic chemicals like the formaldehyde used in preserving the bodies for showing during traditional funeral services from escaping into the environment.

The production of strong plastic vaults can be a fine replacement of the concrete vaults. They are quick to manufacture, lightweight, easy to use and the plastic will last virtually forever.

Also government agencies are prohibiting the cremation of bodies of people killed in nuclear or biological disasters so that the toxins do not escape with smoke into the atmosphere.

With all of this in mind, the manufacture of thousands of plastic vaults is a good business venture. Someone is already in a position to get very wealthy once everything hits the fan.
​
Yes Mr. Sprat, the stacks of plastic "coffins" or burial vaults is an issue to make us all wonder.