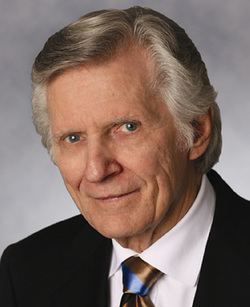 Early in his ministry, in 1974, the late New York evangelist and author David Wilkerson told of troubling prophetic visions in America’s future. Many of the Wilkerson prophecies have already occurred and are in the process of happening even now.

His most startling prediction is that the United States will be reeling soon from what he called “the biggest most disastrous earthquake in history. It will cause widespread panic and fear.” He said this monster quake will be preceded by another disastrous earthquake on the other side of the world, possibly in Japan.

The March 2011 quake that destroyed three nuclear power plants and brought a super tsunami that leveled areas in and around Fukushima, Japan, appears to be the early fulfillment of Wilkerson’s dire forecast.

Wilkerson said the massive earthquake he envisioned striking the North American continent may occur in a place where it is least expected. “I am not at all convinced that this earthquake will take place in California. This terrible earthquake may happen in an area that is not known as an earthquake belt. It will be so high on the Richter scale that it will trigger two other major earthquakes,” he said.

The concept of global warming and weather change was not in the news in 1974 when Wilkerson published his alarming prophetic message. Yet he predicted a looming “time of great sorrow” for all of mankind. He said:

“Snowless winters will bring dismal crop production and famine conditions in central and western Russia, India, Pakistan, all of Southeast Asia and Africa will be especially hard hit.  The 40-month drought in Africa and the prolonged dry spell in Brazil will both end temporarily. There will be some relief but conditions will worsen.

“In Africa, millions will face starvation. American food reserves will dwindle partially due to drought and flood in this country. Wheat, rice and soybean reserves will be completely exhausted. The demand for corn, rice and wheat will not be met.”

Wilkerson foresaw an increase in violent storms. He said: “Floods, Hurricanes, tornadoes and hailstorms will occur more frequently. More than one-third of the United States will be declared a disaster area within the next few years.”

He said he saw nature going wild, with storms and drought destroying crops, animals and wildlife and raising food prices. These violent and unpredictable weather events will come to brief stops, causing people to believe that the world is returning to normal. But then the violent weather patterns will return and be far worse.

In addition to this, he said he foresaw an outbreak of new epidemics.

“Large chunks of ice will fall from the sky and cause much damage. Watch out for reports of intense ice storms and hailstorms in the future. Also prepare for the most severe winter of all time and record snowfalls in the United States and Canada.”

Wilkerson was well known as the founder of Teen Challenge, an addiction recovery program. He was the author of a well-known book The Cross and the Switchblade. He also founded and was pastor of the Times Square Church, a non-denominational church, in New York.

He was killed in an automobile accident in Texas in April 27, 2011.