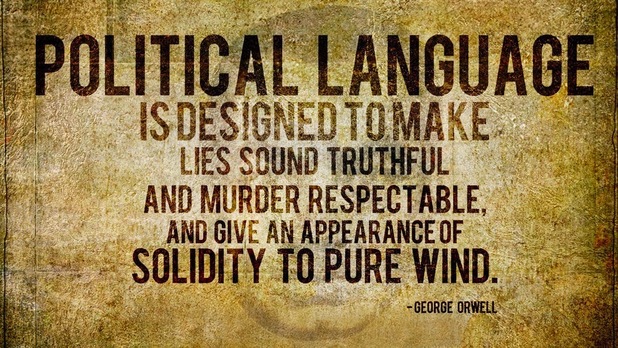 In my years of reporting I have had to constantly deal with professional jargon. Most professions use it. Jargon is a way of saying things using words that are understood by others within the circle but they are designed to confuse everybody else.

Lawyers use jargon. So do medical people, educators, psychologists, and even journalists. Politicians are very skilled at not only using jargon, but something George Orwell called "double-speak." These are words and phrases that mean something very different from what they appear to mean.

The technical name for this is obfuscation. By definition this means "beclouding" or the hiding of the intended meaning in communication making what is said confusing, ambiguous or hard to interpret.

When we listen to the political debates over issues in Washington, nearly everything that is said is a form of obfuscation. Nobody says what they mean. Politicians become skilled at dodging issues by talking around them, or by twisting information to support their intended cause. Contemporary critics are calling it "lying," and that may be close to the truth.

Republican members of Congress used this kind of double-talk in the debate over how to avoid the so-called "fiscal cliff" in late 2012. They used it in the battle against President Obama's Health Care Reform Act. They are using it in the debate over gun control, border control and the war on drugs. All politicians use it in campaign political advertising that dominates our television screens every election year. What is said sounds good. What it means is something else.

Its the old snake medicine routine. We seek to find the right shell with the pea hidden under it after the operator with fast hands has shifted the shells so quickly our eyes play tricks on us. This is known as the "shell game." And it works well at tricking the players.

People subjected to double-speak soon become confused. They start believing the old adage that "war is peace," and smart students are nerds, and that winning a game of football is the center of life of the community.

The television talking heads draw our attention to constant drama. They milk a single story while drawing our attention away from more important events going on in our world. They keep us so preoccupied that we forget that our planet is dying and that our failure to do something about it may lead us to future extinction.

This is a form of mind control that has worked well for centuries. Because issues have become so critical it may now be leading us like lambs to the slaughter.