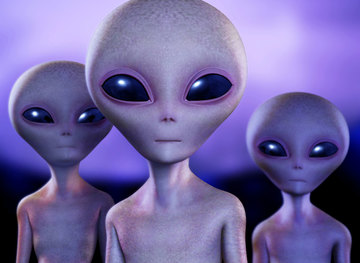 The first contact I had with aliens, at least that I was aware of, occurred in about 1997 when we were living in Show Low, Arizona. I was experimenting with tapes from the Monroe Institute, designed to bring the listener into an out-of-body state of consciousness.

It was a series of tapes known as the Gateway Voyage. I had been listening to the tapes for several days and had reached a particular mental state in which I was clearly in my body but looking at the world around me through my “third eye.” And there, standing beside me were two alien beings.

They looked exactly like the entities commonly described by most of the people who claim to have been abducted and carried off into space craft. They had thin, almost stick-like bodies but large bulbous heads with round black eyes. One was a little taller than the other. Both were standing close to me as if they were studying what I was doing with great interest. The moment they realized that I could see them they disappeared.

I thought perhaps I had imagined what I saw.

But later, as I went deeper into the Monroe program, I finally succeeded in leaving my body. The first time it happened I went to visit my landlord’s apartment located on the second floor right above ours. I had never been in that apartment but I noticed that it had a bright green carpet and a red lamp shade in the room I visited. I made an excuse the next day to visit my landlord just to confirm what I had seen. Sure enough, the carpet was a bright green and there was a red lamp shade on a floor lamp in the room just inside the door.

I began leaving my body each evening and going to visit various places, then confirming what I saw the following day.

One night as I flew out of my body I met a bright shapeless mass of energy that literally danced before me. As I examined it, the energy attempted to take human form but did a poor job of it. I later joked and called it a gingerbread man, but that was as close as it came to looking human.

Realizing that I was dealing with an intelligent being, I began dancing and flying around in the air with it. We literally played that way for a few moments, tumbling and rolling over each other. Then I attempted to communicate with it with mental images. I was not surprised when it responded. But the images I received were troublesome. I was shown a world on fire. Everything, the great monuments humans built, the skyscrapers, the super highways, the ships, the aircraft, everything was lost in the flames. After I received this image, the gingerbread man was gone and I found myself back in my body and back to reality.

I never saw the gingerbread entity again. I have always thought of that message as a severe warning. It was also obvious to me that this being, if it was from another world or dimension, was making an expression of friendship before delivering the warning.

Those were the only face-to-face contacts with alien beings that I remember. But I suspect there were others that perhaps I was programmed to forget.

When I was a child growing up in a house in Harbor Beach, Michigan, I remember a period when I really enjoyed going to bed at night. That was because each night, as I was dozing off, I had a distinct sensation of flying out through the window and off through the sky. I loved that sensation and looked forward to the experience every night. I have no recollection of where I was going or where I went, however.

In later years I heard my son talk about having this same experience when he was a young boy. His story brought back memories long forgotten. Out of curiosity, when visiting my elderly father a few months later, I asked him if he remembered a sensation of flying when he was a child. At first he said he did not remember anything like this. But then later, after thinking about it for a while, he said he did remember flying. It was something that happened to the men in my family for three generations. Were we being picked up by aliens to have our DNA altered? And if this was so, why?

There is another memory that came back to haunt me in later years. When we lived on the farm near Port Hope, I had dormer windows in my bedroom that opened onto a porch roof. I liked to climb out on the roof on warm summer nights, and from there scramble up to the peak of the two-story house and lie in the cool night air, listening to the frogs, the loons and other night creatures.

But the memory that came to me later was of watching a large glowing orange disk rise up from behind the barn and hoover in the sky in front of me. That is all I remember of it. But just thinking of that orange ball always makes my heart flutter and brings tears to my eyes. I think I may have really seen this thing, and whatever happened to me that night scared the hell out of me. I just don’t know what it was.

When I was in my early twenties I spent a year working on an oil well cleaning service after an oil field was discovered in and around Jonesville, Michigan. I worked with a man named L. V. “Corky” Case cleaning paraffin from oil wells. Once set up at a well head we took turns pulling a heavy iron sinker and brush up and dropping it into the paraffin that collected along the walls of the well pipe. This one clear summer afternoon, as Corky was taking his turn, I was lying in some nearby grass staring up at the blue sky. Suddenly I realized I was looking at what appeared to be a star. I thought it odd to see a star in broad daylight, and kept studying it. Suddenly the object shot off in a westerly direction at a fantastic speed, and quickly disappeared on the horizon.

I realized that I had just seen a UFO! And it had been watching us.