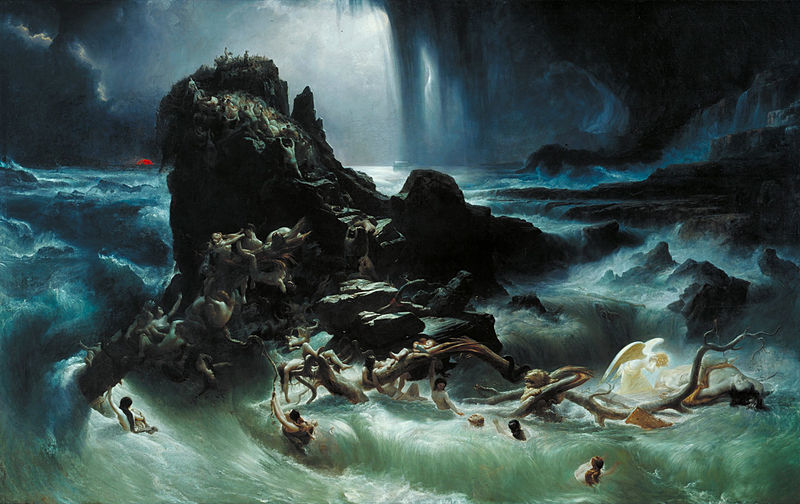 Did The World Flood Or Was It Something Else?

Recent discoveries of sunken ruins of ancient cities in three locations around the planet give growing support to the world-wide myth that a catastrophic flood once destroyed ancient civilizations.

The reports from the Book of Genesis to Plato's famous tale of the lost continent of Atlantis, are part of a broad list of stories passed down for thousands of years that suggest a deluge of Biblical proportions really happened.

That archaeologists are exploring newly discovered evidence of ancient cities in the Pacific Ocean just off the coast of Japan, in the Indian Ocean off the coast of India, and the Atlantic Ocean off the coast of Cuba is an interesting new development. These discoveries, if they prove to be what they appear, will enhance argument that the history of human existence is much older than once believed.

British author Graham Hancock claims in his books that everything we know about ancient history is wrong. He argues that civilization didn't start in Sumeria and Egypt around 3,500 BC, but instead, was present 10,000 years before that in great cities that were destroyed by cataclysm.

"We have 600 flood myths around the world," he said in a recent interview with The Guardian. "Archeologists tell us these are meaningless; all they represent are psychological archetypes -- memories of birth, in the case of the flood -- or exaggerations of local river floods."

"The other thing that almost always goes with these myths is the notion of an antediluvian civilization," Hancock said. He explained that antediluvian means stories about "something which existed before the flood and was destroyed by it. I couldn’t see any good reason why these universal myths shouldn’t be a memory of that event, yet I found that this idea hadn’t been explored."

Indeed, the concept of a great civilization that existed in the ancient past, has lacked any real scientific investigation. Yet anomalies, things that just don't support the official "Bible version" of human history, keep popping up as archaeologists, miners and contractors grub around under the surface of our planet.

Such things as the remains of an ancient spark plug, found in a lump of coal mined in California; a solid gold model of a modern jet aircraft unearthed in Mexico; and the silicone calcification of sand in various areas of the world, giving evidence of ancient atomic warfare, are difficult to explain without shedding old tunnel realities.

World mythology is filled with strange stories of ancient civilizations. Not only did Plato leave us the story of Atlantis, a great city that mysteriously sank into what we now call the Atlantic Ocean, but far Eastern cultures have a strange story of the ancient civilization of Mu, located on another lost continent of Lemuria, which disappeared somewhere in the Southern Pacific Ocean. Legend has it that both Lemuria and Atlantis existed at about the same time, roughly 12,000 years ago, and that they were both victims of some kind of catastrophic event.

Dr. Joseph Dillow, in his book "The Waters Above," and Dr. Larry Vardiman in a book, "The Sky is Falling," explore a theory that a thick vapor canopy once surrounded the Earth, creating a perfect climate that made the entire planet lush and green. But they say the Earth was flooded when this canopy collapsed sometime around 8,000 or 10,000 years ago. Dillow uses Old Testament references to support the theory. The writers also note unexplained phenomenon, like the discovery of frozen animals in the frigid tundra regions of North America and Russia. These animals, many of them dinosaurs with their meals of grass and flowers still in their mouths, apparently died so quickly they didn't have time to swallow or digest their food.

That the animals were feeding on plants that only grow in warm, temperate climates, and that the list of frozen animals include saber toothed tigers, horses and many other creatures that would not live in such frigid areas, suggests that something extraordinary happened at the moment they perished. Either there was a dynamic pole shift, or something else happened to cause an extreme drop in temperature. It happened so quickly, the animals were stored in a permanent deep freeze that preserved them, intact, for thousands of years.

The vapor canopy theory might explain how the Earth could have had an advanced antediluvian civilization that was suddenly destroyed by a catastrophic flood, but questions about how that fits in with the theory of plate movements and the splitting of a super continent called Pangaea into several smaller continents sets the mind spinning. That a recent mapping of the floor of the Atlantic Ocean shows a clear line where the continents of Europe and Africa broke away from North and South America and then slowly drifted apart, gives credence to the super continent theory.

If deep water archaeological expeditions someday prove that the sonar images of square, rectangular and triangular shapes on the ocean bottoms of the world are really the ruins of ancient cities, it will only compound the mystery of just what happened.

It is obvious that human origins on this planet are older and more mysterious than we thought.