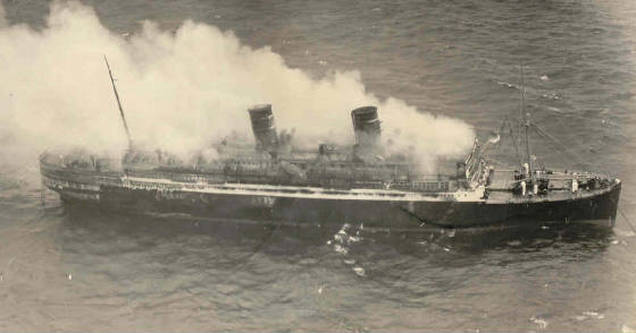 The Burning Of The Morro Castle

When launched in 1930 the Ward Line’s new passenger liner Morro Castle was considered the most elegant of any vessel afloat. The elaborate furnishings included a Louis XVI-style lounge, an empire-styled writing room and an Italian Renaissance-styled smoking room. Her cabins and public rooms were so ornate and so elegantly furnished, one newspaper referred to the ship as a "millionaire’s yacht."

Perhaps it was all of that fine varnished woodwork and tapestry that contributed to the fire that swept the ship just four years later, killing 137 passengers and crew members. To this day the Morro Castle disaster is ranked right up there with the Titanic, Lusitania and Empress of Ireland for notorious historical names of ships . . . not because the death rate was as high but because of the circumstances surrounding the fire.

The Morro Castle was completing a luxury cruise to Havana, Cuba, and was returning to New York when it got caught in a fierce Atlantic storm. The storm was still raging as the ship was beating its way northward along the New Jersey coast on September 8, 1934.

Survivor Dolly McTigue said she and her husband, Sidney, were invited to sit at the captain’s table for dinner that evening. Before they were supposed to arrive, however, she said they were informed that the captain had just dropped dead of a heart attack and the invitation was cancelled.

"You know, after hearing the captain was dead, you’re kind of scared, you don’t know what’s going to happen," McTigue said. She said she and Sidney were on their honeymoon and up to that point it had been a grand trip. But after the storm and the captain’s death, everything went bad.
​
"We all retired early," she said. "At about three that morning, Sidney woke me up and said the boat was on fire. We could hear people yelling outside our cabin and see smoke coming in." 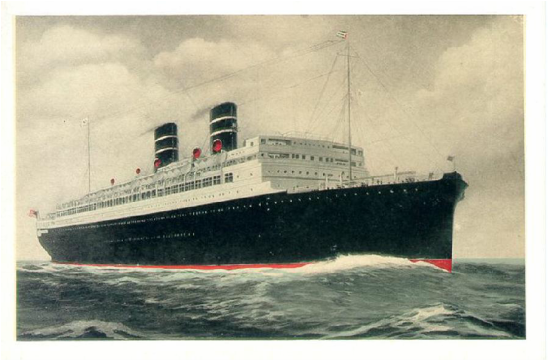 The fire had been discovered that morning in the aft locker of the writing room on the Promenade Deck. Flames already were raging in the locker and were racing over the false ceiling over the room when the ship’s stewards attempted to fight the fire. It quickly got away from them and swept aft into the First Class Lounge. Within minutes fire and smoke engulfed most of the forward Promenade Deck and was out of control.

The stewards who had been attempting to fight the fire ran for their lives and failed to close the fire doors on that deck, while other crew members broke out windows in an effort to fight the fire from the deck. The gale was still raging and the wind quickly fanned the fire into an inferno. The crew also failed to sound an alarm until many passengers were already trapped in their cabins, and the crew failed to hove to and send out a wireless call for help until the fire was engulfing much of the superstructure. It also cut off access to many of the life boats.

McTigue said she and her husband were among the passengers caught on deck that night, unable to find a way to the life boats. They were all driven to the open decks aft, away from the fire and away from the boats. To escape the flames they were forced to put on life jackets and leap over the railing into the angry cold sea.

She said the life jackets of that day were not as buoyant as modern ones and they didn’t quite keep a person’s head above water. Consequently, she said she was forced to kick her feet to keep her head above water for hours until rescue came.

She said many of the older people around them got tired and drowned. McTigue said she tried to hold a young boy who dropped in the water near her, but got tired and passed him on to another person. She said that person tired after a while and passed the boy on to another. Eventually the boy disappeared into the black.

McTigue said the next morning Sidney told her to swim with him to a nearby lifeboat. The boat was crowded with people who did not want to let them on, but Sidney forced his way into the boat and then pulled her in. It was after that when a ship arrived and took them aboard.

"They put us in the boiler room where the fire was, and they told us to take our wet clothes off. They gave us blankets, and we all lay there," she said.

McTigue said the passengers were never given instructions on what to do in case of disaster at sea when they boarded the Morro Castle, and the crew appeared totally disorganized during the fire, perhaps due to the absence of the captain. The cause of the fire was never known.

The ship burned to a smoldering wreck that eventually washed ashore at Asbury Park. It remained there, a burned out hulk for several months until it was eventually towed away and scrapped.

The disaster destroyed the Ward Line. In 1935 the Ward name was dropped and the line became known as the Cuba Mail Line. Even the fleet colors were changed in an effort to erase the memory of the Morro Castle’s infamous profile.
​
The Morro Castle fire also brought improved fire safety standards for liners. Today ships are constructed with fire retardant materials, automatic fire doors, ship-wide fire alarms and crew members go through regular fire drills and training for handling fires at sea.