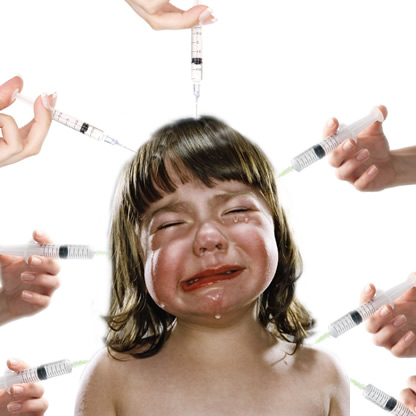 The alleged link between the contemporary “MMR” vaccine and autism has created a strange medical conspiracy theory that is pitting parents against public school districts, and medical professionals against one another. It is a topic that I have been loath to write about even though I have been living in the thick of this controversy all of my life.

When I was a child I remember the horrors of polio. Children in my small Michigan hometown were stricken and surviving in iron lungs just to stay alive. President Franklin D. Roosevelt was in a wheelchair after surviving polio. When the Dr. Jonas Salk produced the polio vaccine he became a world hero and everybody lined up in public schools and hospital centers to get their shot.

Among the first medical events every child in our town experienced was the smallpox vaccination. I remember it created a big red and itchy blotch on my shoulder that went away after a few days. It left a scar that never went away. In gym class I noticed that every other boy had the same scar somewhere on their upper arm. We were all “protected” against that dread disease thanks, they said, to the work of another innovator, Edward Jenner, in 1796. Before that, smallpox was a worldwide killer.

I also recall stepping on a rusted nail in my bare feet while “building” a fort in the back yard out of some junk lumber. I was given a tetanus shot to prevent a serious disease they called “lock jaw.” Since I grew up and worked on a farm, it was routine to get booster tetanus shots.

Because of these personal experiences, I grew up believing that vaccines designed to protect us against severe threats of disease were a good thing.

Something happened between my childhood and my parenthood. When we became parents of four children we became caught up in a strange and silent conflict over vaccinations. It seems that a new combination “MMR” vaccine had been developed that allegedly protected children against three other standard childhood diseases, namely measles, mumps and German measles (rubella). Consequently doctors and nursing staff were sticking needles into children’s arms for a variety of vaccinations that also included shots for diphtheria, whooping cough, influenza and more recently they have added ones for hepatitis B and sexually transmitted diseases.

I was indifferent to all of the new vaccinations. But my wife, who was a medical professional and who had a sixth sense about things, concluded early on that she did want our children inoculated with so many “shots.” Somehow she managed to slip our children past those childhood tortures and get them enrolled in public school, even though the schools were already starting to insist. I did not fully understand my wife’s objections, but I trusted her judgment in things like that.

Now a lot of health professionals and even doctors are condemning the practice of vaccinating children. And for good reason, it seems. The shots appear to be affecting the brains of children, bringing on this dreaded new syndrome known as autism.

Autism is the name of a group of complex disorders involving brain development. Children are displaying various degrees of problems in social interaction, verbal and nonverbal communication and repetitive behaviors. In other words, something is causing them to go a bit wacky.

A lot of medical people have been linking those MMR vaccinations with autism, but the critics have been stonewalled by the pharmaceutical industry in unimaginable ways. For example, Andrew Wakefield’s documentary VAXXED: From Cover-Up to Catastrophe, documenting a direct link between the shots and autism cases, gained international attention when it was removed from the Tribeca Film Festival. Film star Robert De Niro made headlines when he defended the documentary then reversed himself the following day.

The film points to a graph prepared by Dr. William Thompson, formerly with the Centers for Disease Control and Prevention that offers a startling link between the MMR vaccine and autism. Thompson claimed autism begins to spike within 15 months after the child receives the vaccine.

What do vaccinations contain that makes them so toxic to children? Ian Sinclair, author of an on-line book Vaccine; The Hidden Facts, said the chemicals and elements include formaldehyde, thimerosal (a derivative of mercury), aluminum phosphate, phenol, alum and acetone; all toxic substances to the human body.

Children with healthy immune systems can generally fight off the assault these various poisons bring into the body. But Sinclair notes that our modern environment, with children being constantly exposed to fluoridated water, food additives, GMO foods laced with pesticides, atmospheric pollutants, electromagnetic and gamma radiation, the vaccine attack overpowers the child.

In addition to autism, there has been a rapid increase in childhood cancer, juvenile diabetes, asthma and neurological disorders, Sinclair wrote.

So if this information is known, why are we still injecting children with MMR vaccines?Sinclair points to three factors: Big MONEY for the drug industry, it has been one of the “foundation stones of medical science,” and the public has been brainwashed by medical propaganda.

The thing about the flu, measles and the mumps is that they are usual childhood diseases. They are rarely life-threatening. Once children contact the disease and recover from it, they are usually immune for the rest of their lives. There are many varieties of influenza so doctors are hawking new vaccinations for this bug every year.

I can’t defend the decision to avoid vaccinations against tetanus, diphtheria, whooping cough and hepatitis, except to say they are all relatively rare and most people live full lives without ever contacting any of them. Influenza is more common and we usually always recover from it as well unless there are complications.

Under the circumstances, the risks of exposure to the diseases are not as severe as receiving the vaccine against them.

Unfortunately, due to our changing social environment, the problem of sexually transmitted disease has grown to an epidemic level. Thus the new and obviously controversial HPV vaccination for young boys and girls may be another one we should not avoid.

It just seems that the people who manufacture these vaccines could find less harmful additives.