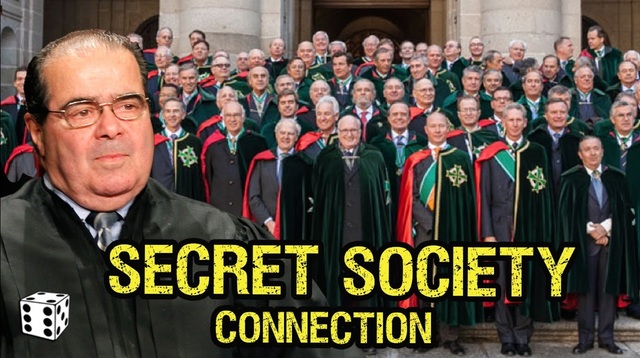 Was Justice Scalia Part of a Secret Order?

When Supreme Court Justice Antonin Scalia died unexpectedly on Feb. 13, 2016, he was fraternizing at a remote resort in Texas with members of an ancient and secret society known as the International Order of St. Hubertus.

Scalia, whose presence on the high court helped tip the scales of justice in the United States with several controversial 5-4 decisions, appears to have been closely linked to California's Bohemian Grove, an organization with possible ties to the Jesuits.

A well-known staunch conservative, Scalia was known for his disagreements and harsh commentary from the high court. He was among the five judges who created the 5-4 majority in the controversial Citizens United case that brought about this year’s unpopular presidential election.

Scalia also was among the five judges that ruled to give George W. Bush the presidency in 2000, consequently stopping a recount of Florida ballots. Bush squeezed a questionable won over Democratic candidate Al Gore that year by an estimated 300 Florida votes. The election that year across the entire nation hinged on the outcome of voting in that single state. And Bush's brother, Jeb, was Florida's governor.

Bush went on to plunge the nation into two unending wars. He ignored a world-wide effort to reverse carbon emissions and global warming. His administration adopted the Patriot Act that opened the door to domestic spying and he introduced the global War on Terror. It was the Bush/Cheney Administration that created the massive and financially wasteful Department of Homeland Security. Mr. Bush introduced the No Child Left Behind education program that has nearly destroyed the nation’s once outstanding educational system.

He died while mingling among some 35 men, many if not all of them members of the International Order of St. Hubertus. They were gathered at Cibolo Creek Ranch, a private facility owned by John B. Poindexter, a member of the order, Scalia was 79.

It is interesting to note that Poindexter and C. Allen Foster, a Washington lawyer who flew with Scalia to the ranch, both hold leadership positions in the Order of St. Hubertus. During his contact with the media Poindexter “indicated that he knew of no connection between Scalia and the Order.” He said Scalia was at the ranch that day to “go hunting.”

It is strange that the spokesmen for the group went out of their way to separate Scalia from suggested association or membership of the Order of St. Hubertus.

So what is this secret society and what might be its significance as a link through Scalia with the U.S. Supreme Court?

What we could learn is that the Order is a world-wide male-only society that has been in existence since it was founded in Austria, Bohemia, by Count Franz Anton von Sporck in 1695. It is named for Hubert, the patron saint of hunters and fishermen. The members parade around in dark-green robes emblazoned with a large cross and the motto “Deum Diligite Animalia Diligentes.” The motto in English means “Honoring God by honoring His creatures.”

While we could find no reference to it, the Order obviously has Roman Catholic roots, which suspiciously links it to the Jesuits. Scalia was a Roman Catholic. He also was a graduate of Georgetown University, a Jesuit school operating in Washington, D.C.

The Order formed a chapter in the United States in 1966 at the famed Bohemian Club in San Francisco. This club is associated with the all-male Bohemian Grove, another well-known secret society.

All of this information leaves many unanswered questions about the forces that influenced Scalia’s vote on the nation’s high court. It must be assumed that if he wasn’t a member, he was certainly well associated with this Jesuit linked organization, and well indoctrinated by the Jesuit mission of a one-world government.

So it seems that high court decisions designed to lead the United States into a state of moral and financial collapse might well have been a Jesuit aim being dutifully carried out by Justice Scalia.
​
And we must then ask who else on that court is linked with the Jesuits?