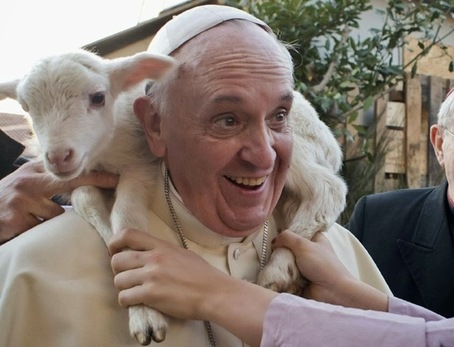 The Shepherd?
Pope Francis and the Number 13

If you are into numerology you may enjoy a brief look at how the number 13 plays in the life and selection of Pope Francis for his position at the Vatican.

There is that and then there are the strange synchronizes linking the election of this pope to the number 13. His election fell on the thirteenth day of the third month of the year 2013. Add the numbers 3+1+3+2+0+1+3 and you get 13.

He is the first non-European man to be named pope since the Eighth Century. The last one came to Rome 13 centuries ago.

Is there special esoteric significance behind the number 13 and the fact that it played a role in the naming of this pope?

Everybody knows that the number 13 is considered an unlucky number. It is the "odd-man-out" in groups. It is a number that many architects, race car drivers and aircraft designers often avoid. Buildings often lack a thirteenth floor, there sometimes is no seat number thirteen on an aircraft and race cars rarely carry the number 13.

Then there is the notorious "Friday the Thirteenth," a day that superstitious people believe brings bad luck.

Ship’s captains often refused to set sail on either a Friday or the thirteenth day of the month because of superstition. This was especially true during the days of sailing ships when voyages lasted for months or years, were often fraught with great peril and there was no radio communication.

Some say the myth behind Friday the thirteenth stems from the arrest of Jacques de Molay, Grand Master of the Knights Templar and 60 of his senior knights by King Philip IV of France on Friday, October 13, 1307. That same day thousands of Templar's were arrested and tortured before they were executed.

That event drove the Knights Templar into becoming the secret society it has since become; now known as the Free Masons.

In the Tarot deck, the thirteenth card is the Death card. While it displays death, this card also signifies perpetual transformation, the cycle of birth, death and rebirth. It speaks of change and regeneration, something the Roman Catholic Church badly needs today.