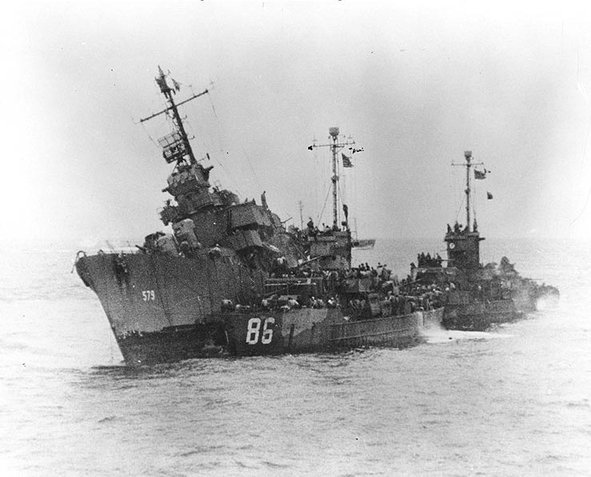 We have posted the story about Admiral John McCrey and the day his command, the battleship Iowa was nearly struck by a friendly but accidentally fired torpedo while carrying President Franklin D. Roosevelt and his top military brass on a secret mission to Tahran during the height of World War II.

After receiving word that the torpedo was mistakenly fired in the Iowa’s direction, McCrey ordered the ship turned so hard that many of the officers on the battleship nearly lost their footing. The wayward missile slipped past the ship and exploded in the wake of the propellers.

That torpedo was discharged from the destroyer William D. Porter, one of two escort ships traveling in convoy with the Iowa for the trip across the Atlantic in November, 1943. After the incident, the destroyer’s commander, Captain Wilfred Walker and his entire crew were sent to Bermuda where they were placed under arrest while an investigation was conducted.

Torpedo room operator Lawton Dawson confessed to having inadvertently left a primer in the ship’s number three torpedo tube, causing it to launch during a practice drill at sea. Dawson was sentenced to 14 years of hard labor but President Roosevelt intervened. He said he was assured it had been an accident and that no punishment should be ordered.

Because it was wartime, the whole incident was hidden under a cloak of secrecy. Captain Walker and some of the other officers and sailors on the Porter were given obscure shore assignments and the destroyer was reassigned to the upper Aleutians in the North Pacific for the next year.

While it was a secret to the outside world, the word spread quickly among naval officers and there was a strange stigma attached to the “Willie D” the nickname given the William D. Porter. Sailors frequently welcomed the vessel with the call: “Don’t shoot, we’re Republicans” when the Porter entered port or joined a convoy.

Taking a shot at the Iowa when the President was on board was a hard enough reputation to live down. But the Porter seemed to have been a hard luck ship from the day it was launched in 1943 until it was sunk by a Japanese kamikaze off Okinawa in 1945.

The night before leaving Norfolk, Va., on that fateful voyage with the Iowa, the Porter accidentally backed into the side of another destroyer, ripping away the other ship’s railings, life rafts, ship’s boat and other pieces of equipment.

Then, while under way and before the torpedo incident the Porter accidentally dropped a depth charge off of her stern. The device exploded causing much alarm in the convoy. Next a freak wave swept the ship, carrying away everything that wasn’t lashed down including an unlucky sailor caught on the deck. The man was washed overboard and never found.

During its duty in the North Pacific, the Porter conducted anti-submarine patrols and convoy duties. She also participated in the assaults on Japanese positions in the Kuril Islands, Admiralty Islands, New Guinea and the Philippines. In December, 1944 she took part in operations at Mindoro and supported the amphibious landings on Luzon.

The ship’s gunners had lots of practice before they got actively involved in a shooting war. Before leaving the Aleutians someone accidentally fired a five-inch shell that landed in the yard of the American base commander. Nobody was hurt.
The destroyer joined the Philippine invasion forces and distinguished itself by shooting down Japanese aircraft. The destroyer also mistakenly shot down three American planes in the process. The Porter accidentally shot up the side of the sister ship, the USS Luce in yet another bazaar incident.
​
The Porter was sunk by a wayward kamikaze on June 10, 1945. The plane crashed alongside the destroyer then blew up under the hull, ripping a hole in the bottom of the ship. The entire crew escaped before the “Willie D” disappeared in 2,400 feet of water.