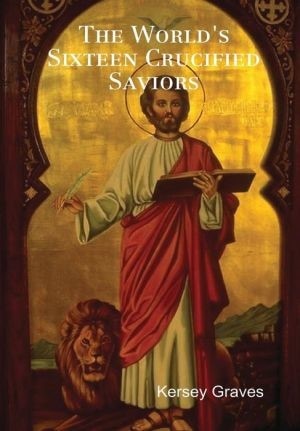 The Jesus Story. . . A Cruel Hoax on Humanity

There is political power in religion. And because the vast majority of the people in this world are caught up in one religious belief system or another, colossal fences have been erected.

These fences between religious groups have often been a force behind spiritual and physical warfare that frequently erupts. For example, the Jews and Moslims battle in the Middle East; not because of racial differences, which don't exist; but because of territory, water, and always due to the difference in the way they perceive their Creator.

The same can be said for the Catholic Irish and Protestant Irish.

Or the Catholic, Protestant and Muslim people who conduct civil war in Bosnia and Herzegovina. And in Iraq civil wars that continue to rage among the Arab Muslim people who are Shi’ite, Sunni or Kurds, all representing different “schools” of religious thought.

The "believers" of all faiths tend to attack anyone who dares to claim that the god they bow down to is wrong, or that the way they have chosen for worship is in error. It is even worse when this personal social god is challenged by agnostics, Gnostics and people who choose other spiritual pathways.

Fortunately, there has always been a subtle thread of true spiritual teaching in existence even though this ancient spiritually enlightened brotherhood has long been driven into the shadows by bloody organized religious zealots.

The record of Gnosticism is clearly marked in blood. The great witch hunts that swept New England and Europe were an attack on a gentle people who may well have understood the reality of world beyond the veil. There also was the mass execution, enslavement and forced reformation of the American Indian. Remember the ravaging and murder of the Aztecs in Mexico. It was all done in the name of the church, which declared all people who failed to accept Jesus to be "heathen" and therefore "of the Devil."

Christianity, like the Muslim, Hindu, and Buddhist faith, all involve fabrications of so-called gods who were said to have taken the form of man and visited Earth to enlighten the masses. The great religions that sprang from the roots of these movements have succeeded in enslaving the human race for thousands of years.

Christianity, the most recent of the cults that developed 2000 years ago, is the latest and ugliest example of a fabricated religious system to have emerged. The irony of the story is that a man named Jesus seems to have really existed. He appears to have been an enlightened teacher who came in an attempt to turn the Hebrew people away from radical and ancient forms of cult practice. He taught followers to simply love one another. He made waves within the Jewish and Roman politics of the day so he was murdered. His story was generated from a cult created by Paul that grew into perhaps that most destructive religion that world has ever known.

We can be assured that Jesus was not born of a virgin, that he never walked on water, raised the dead, or arose from his own grave once he was personally dead.

Christianity did not start with Christ. It had its origins with Paul, a man who was busy teaching an anti-Christ theology that was known in his day as Paulinism. Paul claimed to have had an encounter with the spirit of Jesus after Jesus allegedly rose from the dead. That was a lie.

Paulinism was renamed Christianity by Constantine, a Roman emperor who accepted Paul's teachings some 200 years after Jesus was gone. All of the miracles that allegedly occurred during the brief ministry of Jesus were invented by the Roman church and stolen from ancient religions that had already been in existence.

For proof of this assertion, consider the fabrication that went on in writing the Jesus story. There is, for example, strong evidence that the four Gospels were not written by the so-called apostles who studied under Jesus. All four books were written an estimated 100 to 175 years after Jesus was supposed to have been killed.

Paul wrote his letters before the Gospels were penned. Notice when you study them that he fails to mention the wonderful sermons, the magic, the virgin birth, or any of the other things that argue the deity of Jesus. Yet if Paul was a contemporary of Jesus, and really met the resurrected Christ on the road to Damascus, these stories should have been an important part of his ministry.

One might argue that religious zealots devoted hours working out the Jesus story, carefully building from the first book, which was the short version called the Gospel of Mark. Each gospel writer after this appears to have expanded on the Mark account until we get to the Gospel of John, which openly declares the deity of Jesus.

The Jesus story, however, was not original. It was all plagiarized in bits and pieces, and sometimes blatantly intact, from ancient god/man mythology passed down by Greek, Roman, Egyptian, and Persian cultures.

For example the story of the Persian sun-god Mithra, dating back to about 1400 BC, talks about a hero born of a virgin in a stable on the winter solstice. He was attended by shepherds who brought gifts. He was said to have taken a last supper with his followers before returning to his father, the god of all. Mithra was believed not to have died, but ascended directly to heaven. Followers believed he would return at the end of time to raise the dead in a physical resurrection for a final judgment. At that time, the world will be destroyed by fire. And yes, followers of Mithra were granted immortal life following baptism.

A book titled The Origins of Christianity and the Quest for the Historical Jesus Christ by an author who identifies herself only as Acharya S,  notes many other amazing similarities between Christianity and pre-Christian mythology.

Acharya states that the Buddha also was born of a virgin, he had 12 disciples, he performed miracles, healed the sick, walked on water and fed 500 men from a small basket of cakes. The Buddha was transfigured on a mount, was crucified in a sin-atonement, suffered three days in hell and was resurrected. After this he ascended to heaven, or Nirvana. Writings refer to Buddha as the "Good Shepherd," the "carpenter" and "Savior of the World."

The Egyptian god figure Horus was said to have been born of the virgin Isis on December 25. He was born in a cave, his birth was announced by a star in the East, and he was attended by three wise men. He was a child teacher in the temple. He was baptized by Anup the Baptizer (John the Baptist?), he had 12 disciples, he performed miracles, walked on water, and raised a man named El-Azar-us from the dead. Horus also was transfigured on a mount, was crucified, buried in a tomb and resurrected. He was called a "fisher," and was associated with the Lamb, Lion and Fish.

In India, the god/man Krishna was born of a virgin, his father was a carpenter, his birth was attended by angels, wise men and shepherds, and they brought presents of gold, frankincense and myrrh. There was a ruler who attempted to destroy the infant by ordering the slaughter of thousands of babies. Krishna worked miracles and wonders, raised the dead, healed lepers, the deaf and the blind. He used parables to teach people about charity and love. He was transfigured in front of his disciples. Some stories say Krishna died on a tree or was crucified between two thieves. He rose from the dead and ascended to heaven.

It is said that Constantine, who advanced the cause of Christianity by making it the official religion throughout Europe, originally followed the Mithraic cult before his conversion. The Vatican is filled with relics linking not only these two figures, but others as well.

In her book Acharya states that stored in the catacombs of the Vatican are pictures of the baby Horus being held by the virgin mother Isis - the original "Madonna and Child." She writes: "the Vatican itself is built upon the papacy of Mithra who shares many qualities with Jesus and who existed as a deity long before the Jesus character was formalized.

The Christian hierarchy is nearly identical to the Mithraic version it replaced. Virtually all of the elements of the Catholic ritual, from miter to wafer to water to altar to doxology, are directly taken from earlier pagan mystery religions.

Paganism goes even deeper than this in the Roman Catholic Church.

If you carefully examine photographs of the garb worn by the Pope, and the many decorations (mostly of gold) adorning the rooms and hallways of the Vatican, you will see many symbols of sun worship. This is because the sun god has always been a deeply ingrained part of the Christian religion.

Again, thanks to the detailed research by writer Acharya S, we can see that everything about the Jesus/Buddha/Horus/Mithra/Krishna story(s) is linked to the Gnostic practice of solar deity worship.

"The reason why all these narratives are so similar, with a god-man who is crucified and resurrected, who does miracles and has 12 disciples, is that these stories were based on the movements of the sun through the heavens, an astro-theological development that can be found throughout the planet because the sun and the 12 zodiac signs can be observed around the globe. In other words, Jesus Christ and all the others upon whom this character is predicated are personifications of the sun, and the Gospel fable is merely a rehash of a mythological formula (the "Mythos," as mentioned above) revolving around the movements of the sun through the heavens," Acharya writes.

For example, the births of the man/gods all occur at the time of the winter solstice, the shortest day of the year. After stopping there for three days, the ancients believe the sun then starts to move northward again. It was like a death and resurrection.

Here are some other thoughts from Acharya's book for you to ponder.

"The sun's "followers," "helpers" or "disciples" are the 12 months and the 12 signs of the zodiac or constellations, through which the sun must pass. The sun at 12 noon is in the house or temple of the "Most High"; thus, "he" begins "his Father's work" at "age" 12. The sun enters into each sign of the zodiac at 30°; hence, the "Sun of God" begins his ministry at "age" 30. The sun is hung on a cross or "crucified," which represents its passing through the equinoxes, the vernal equinox being Easter, at which time it is then resurrected."

If the lives of all of these god figures were so similar, why you might ask, haven't people figured out that they have been hoodwinked?

The spiritual forces that control these religious systems are not stupid. Why do you think all of the world religious groups have hated, and been at war with one another for thousands of years?  The false hatreds, distrust and wars were generated so we were too busy and too tired to ever figure it out.
​
When you get to the truth, we discover that we have all been involved in following the same false god. It just went by different names. And in the end, we find that we are all one. We are all the same. The true god has always been with us and in us. Love and light has always been the sacred message. Once we achieve this, there is no longer a place for hatred and warfare against ourselves.