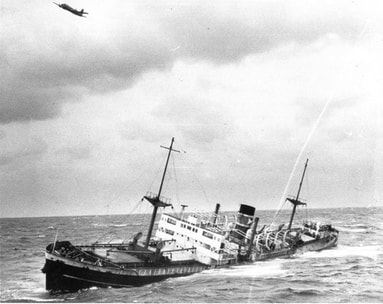 The Ambassador Lost On The Master's First Command

One would think that the simple task of making sure all of the hatches were closed and sealed properly would have been the basic order of the day before the British Freighter Ambassador sailed from Philadelphia for a voyage across the North Atlantic to England with a cargo of grain.

But the newly appointed master, just promoted from the position of First Mate, overlooked this basic task. And he consequently lost his ship after steaming into high seas and hurricane force winds about 660 miles southeast of Halifax, Nova Scotia.

The Admiralty Court later determine that the locking bars had not been placed over the removable hatch boards on No. 3 hatch, just abaft of the bridge, and the heavy quartering seas tore away the tarpaulin hatch cover an flooded the hold. Also the fuel tank vent covers had not been properly maintained and the seas contaminated the fuel when the ship listed. This stopped the engine and left the ship adrift and broached in 50-foot seas.
When the freighter sent its S.O.S. on Feb. 18, 1964, the vessel was already being buffeted by 80 knot winds and the seas were sweeping her listing decks.

The Coast Guard aircraft from Air Station Argentia, Newfoundland, were the first on the scene, followed by the patrol vessel Coos Bay, which got there 24-hours later. Also answering the call was the Norwegian freighter Fruen. In what was later described as daring seamanship, these vessels managed to get lines aboard the wallowing Ambassador and an attempt was made to tow the sinking ship to the nearest safe harbor in the Azores.

Alas the Ambassador's condition was too grim, and she was too far out to sea to be saved. An estimated 13 of the ship's crew of 35 perished when their life raft overturned in high seas while the freighter was sinking on February 21, three days after issuing its emergency distress signal. Tragically the master, Captain Harry Strickland, was among the dead. He was unconscious and could not be revived after being pulled from the water.

At the time the ship sank it was under tow behind the 190-foot Dutch salvage tug Elbe.

The Ambassador was 442-feet long and was about 10 years old at the time it was lost.