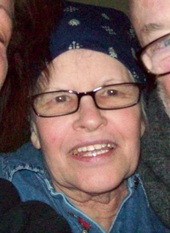 If she had lived a few hundred years earlier I believe my wife Doris might have been declared a witch. There was no doubt that she had interesting superhuman powers that amazed me during the years that we shared on this earth.

She could communicate with the dead and with entities from other dimensions, she was such an amazing psychic that she sometimes answered telephones before they rang, or answered questions in my mind before I asked them. She could skillfully divine for water. She predicted her own death about two years before she died.

I think she also was a SLIder. No, that’s not a typographical error. The phrase SLI is an acronym for the phrase “Street Lamp Interference Data Exchange.” Thus a SLIder is a person that causes street lights to go out when they are around.

Doris says she has noticed that the town streetlights often go off when she is near them. She noticed that they sometimes blinked back on after she passed. It didn't happen all of the time and she said she didn't think much about this over the years. She always considered it an odd coincidence but never considered that she might in some way be responsible for putting those lights out.

There are other things about Doris that we learned to live with over the years. She couldn't wear a watch very long. Every watch she has ever had would quit working after a few days on her wrist. She was always replacing batteries. The watches, no matter how costly or how inexpensive, appeared to get magnetized. That was a problem during the years she worked in hospitals as a medical technologist. She learned to carry her watches in her purse.

Other problems Doris had included frequent crashes when she used a computer, light bulbs burned out when she entered a room and magnetically encoded credit cards or motel room cards sometimes failed when she attempted to use them.

Sometimes Doris could not be photographed. We have had numerous occasions when we snap a picture of her only to find her image partly covered by what appeared to be a bright white reflection or glow. At other times this did not happen. Once when she had a photo identification card prepared at a hospital where she was employed, the image appeared so ghostly the other hospital employees crowded around Doris just to see the picture on her ID card.

Once, when working in an Arizona hospital, Doris entered the room of a patient who was a Navajo Indian. The man looked at Doris in amazement. Before she left the room he told her that her light was very bright. It is true that she has always cast a strong aura. The light virtually streaks from the tips of her fingers when she holds her hand on a white piece of paper. With little practice I easily learned to see her aura.

Because of these odd occurrences, because Doris is amazingly psychic and because she had the ability to communicate freely with entities from beyond we always recognized her as a very unique person.

Research on the Internet recently linked me to an article about other people who share many of the same “psychic” abilities. The most common among them is their ability to turn off street lights when they pass under them. The name dubbed by researchers that have studied this phenomenon has been that they are “SLIders”

A report by Stephen Wagner for About.com identifies the streetlight phenomenon as a form of telekinesis that occurs spontaneously and without any effort on the part of the person that causes it. Wagner said these people appear to have unique and powerful electrical impulses of the brain that cause not only lights to switch on or off, but electronic devices in the home to fail or switch on without any help, watches to fail and electronically encoded cards to go blank.

Wagner wrote that SLI “is a psychic event that is just beginning to be recognized and studied.” He noted that the problem with this kind of research, however is that SLI events, “as with many forms of psychic phenomena, is that they are very difficult to reproduce in a laboratory. They seem to happen spontaneously without the deliberate intention of the SLIder. In fact, the SLIder, according to some informal tests, are usually unable to create the effect on demand.”

We find this to be quite true in the case of my wife. We once attempted to reproduce the ghostly effect on pictures and shot a lot of images of her without getting any glowing effects. Some days she can spend hours at a computer without having any problems. And the lights in our house don’t blink off very often, which is a good thing. The new low-energy bulbs are starting to get pretty costly to replace.

Wagner wrote that while the SLI effect is not a conscious one, “some SLIders report that when it does occur, they often are in an extreme emotional state. A state of anger or stress is often cited as the ‘cause,’” he noted.

Dr. Richard Wiseman of the University of Hertfordshire in the UK has done some research into SLI. He developed what he calls The Mind Machine which he uses to collect date from possible psychic effects at various locations.

Author and paranormal investigator Hillary Evans also has studied SLI. Her book SLI Effect can be downloaded in PDF format on line without charge. She also has opened the Street Lamp Interference Data Exchange, where people with SLI abilities can report their experiences and chat with other SLIders.
​
Evans writes that “It’s quite obvious from the letters I get that these people are perfectly healthy, normal people. It’s just that they have some kind of ability . . . just a gift they’ve got. It may not be a gift they would like to have.”