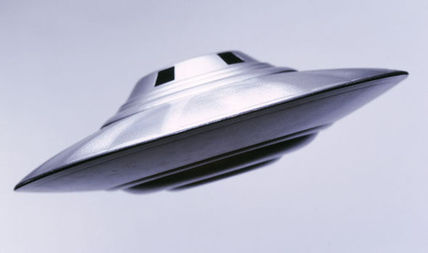 When I was a teenager living on the family farm I discovered that the window next to my bed easily opened to give me easy access to a gentle-sloping roof over the side entrance way to the house. From there I could climb up on the peak of the roof of our two-story brick house. It was great to sit there on a warm summer night, feeling the soft breeze against my face and listening to the songs of the frogs, crickets and other creatures of the night. It was a great place to meditate and tune in with nature. It also was exciting knowing that I was getting away with something I was sure my parents would not have approved of.

In later years something strange began to happen. I started having vivid dreams about sitting on that roof and watching a large orange glowing ball of light rise up from behind the barn. Even today, writing about those dreams, makes my heart pound. I have wondered if the dream was a recollection of a real event and that I may have been one of the many people in the world who experienced abduction by aliens. If it happened I have no other memory of it. I am just swept by a spooky sense of dread when I envision that giant orange ball of light rising up in the darkness over that old barn.

Earlier in my childhood, however, when growing up in our house at Harbor Beach, I remember a strange sensation of "flying" during that time between awake and asleep, just as I was dozing off. It happened for weeks, if not months, every evening after getting tucked into my bed. It was a distinct feeling of physically flying through the air, into and above the clouds. It never frightened me. In fact I enjoyed the sensation so much I looked forward to going to bed in the evening. I remember asking my mother about it. She had no explicable answer other than to suggest they were “fever dreams.” I was a healthy little boy and it seemed odd that I would be experiencing fevers every night. The dreams stopped at about the time I reached puberty.

In later years I overheard our son, Aaron, telling someone about experiencing this same sensation when he was a young boy. When we compared notes, we began to wonder if we hadn't both been “abducted” as young boys for some odd experiment involving our family. My father was still living then and the next time I saw him I made it a point to ask him if he had ever experienced this same sensation as a young boy. At first he said he could not remember it. Later, however, he said he had been thinking about it and did remember “flying” when he was dozing off at night.

During my college days I took some time off to work for a season for an oil well service company. I was on a crew that cleaned paraffin from wells. It was hard tedious work. One hot summer day, while my partner and I were trading off at “spudding” our heavy steel brush through a thick coat of paraffin, I took my break and dropped on my back in some nearby grass. As I was lying there, looking up into a pure blue cloudless late afternoon sky, I noticed what appeared to be a star directly overhead. I thought it odd that a star would be so bright that it could be clearly seen in the daytime. I examined that star for a while. Then, without warning, it flew off toward the horizon at what had to have been an incredible speed. I realized that I had been looking at a UFO. When I told my partner what I had just seen he laughed. He did not believe me.

Not long after Doris and I were married, her brother George had what was, for him, a frightening experience one night while driving on the highway leading into Caro, Michigan. As he was passing the state mental hospital located there, he said a bright green lighted object appeared directly over his car and began following him. He said it hovered over him for several anxious moments before disappearing again.

After I retired from the Times Herald and my wife and I embarked on our Arizona adventure, we lived briefly in Sedona. While there, several people in the town told of seeing a large alien ship hovering directly over the gully that passed directly past the downtown area. What was odd about this event was some people said they clearly saw this ship, while others said they could not see it. One woman said she saw it and her husband, who was standing right beside her at the time, could not see it. She said it was so low in the gully it was level with where she was standing. She said it was very large and she could see that it had windows. Doris and I felt disappointed that we did not have an opportunity to see it.

Later, after taking a job with the White Mountain Independent in Show Low, I had the privilege of doing a personal interview with Travis Walton, the man who claimed he was abducted by a UFO in 1975. The movie Fire in the Sky was based on Walton’s experience.

Later, while living in Springerville, Arizona, Doris was walking from her night job at the hospital to our apartment and observed a large orange ball in the morning sky north of the town. She said it was massive in size. At about the time she reached the apartment, I was getting prepared to go to my bureau office job and the telephone was ringing. It was our daughter, Jennifer, calling from her apartment in Show Low, about sixty miles away. She was all excited because she was watching the same glowing orange ball in the sky. When I heard the story, I ran outside to look and could see nothing through the buildings and the trees. I got in our car and drove out of town, my eyes scanning the sky. I never saw the orange glowing ball.

After we returned to Michigan, Doris’s other brother, Frank, was with a hunting party in Indiana when everyone in the party observed a UFO in the sky over their camp. It was so close they succeeded in snapping a picture of it. They reported the sighting to some agency that investigated. After conducting interviews with the members of that hunting group, and getting each man to draw a picture of the ship was they remembered it, it was determined that it probably was a valid sighting.
​
I had one last strange sighting. It happened one morning while I was driving from Bad Axe, Michigan, to Sebewaing where I was working as an assistant editor for a weekly newspaper. I was in a line of traffic headed toward Sebewaing when right ahead of us appeared a large silvery oval ship that seemed to be coming in for a landing. I couldn’t believe what I was seeing. It appeared to be a very large ship, it had the classic shape of a UFO as drawn by other observers, and windows could clearly be seen. The ship dropped behind a cluster of trees at the left of the road I was on and it was obvious that it had landed in a farm field. I could hardly wait for the traffic to move so I could get another look beyond the trees. When I got there, however, there was nothing to be seen of it. What I found odd about that sighting was that none of the other drivers that morning seemed to be aware of it. There were no brake lights going on, no heads turning to stare, no vehicles stopping so drivers could get a better look. It was as if I was the only one to see it.