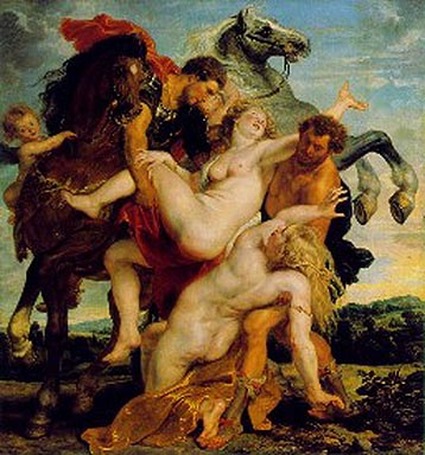 A story in the Book of Judges in the Old Testament is but one of many accounts of terrible sexual perversion that makes us wonder why these ancient writings were included as part of the so-called holy writings of the Hebrew faith.

Judges 19: 22-30, tells of a traveling Levite and his "concubine," or wife, who were staying as a guest of an unidentified old man of the town of Gibeah. In the evening a gang of "wicked men of the city" gathered at the house, pounded on the door, and demanded that the old man send out his guest so they could have sex with him. It seems that homosexuality was as common a practice in ancient times as it has become in certain areas today.

The owner of the house explained that the man was his house guest and asked them not to ask to do such a vile thing. Instead he offered the man’s concubine and his own virgin daughter for them to "use and do to them whatever you wish."

In the end the concubine was sent outside where the gang "raped her and abused her throughout the night." In the morning she was found lying dead at the door of the house.

Not realizing that she was dead, the Levite, who was prepared to continue on his journey, ordered his wife to get up and prepare to hit the road. When he realized she was dead, he put her on his donkey and set out for the trip home.

The story has an even more gruesome conclusion. After arriving home, the Levite "took a knife and cut up his concubine, limb by limb, into twelve parts and sent them into all the areas of Israel.

That last part of the story perhaps gives us some hint as to the real reason for this story. Remember that there were an original 12 tribes of Israel. That a part of the woman’s body was delivered to each tribe must have had some significance. But what would it be? This question has been a thorn in the side of Bible scholars for years.

That the story speaks of the slicing up of the body and the delivery of the body parts clearly turns what begins as a gruesome report of a terrible crime into the category of Hebrew mythology. To understand its meaning we need to read the full story surrounding this Levite and the reason for his journey.

It seems that his wife had been sleeping around with other men and then left her husband, who lived on the side of Mount Ephraim, and returned to her father’s house in Bethlehem, where she stayed for the next four months. Eventually her husband, the Levite, went after her.

On the journey home, while accepting the invitation of the old man to stay at his home for the night, the Levite was besieged by a gang of sexual perverts who saw him as a stranger in town and sought him out for a homosexual encounter. Instead, the adulterous wife was thrown to the mob to use as they wished.

We can only imagine what horrors that woman endured while in the hands of that mob before crawling back to the locked door where she was found lying dead in the morning. The husband, who had done nothing to protect her, then cut up her body and sent the parts out to the tribes as a "lesson" because she was an adulteress.

Remember that under the laws handed down by Moses, adultery was a sin punishable by death. It appears that the husband was bringing the woman back home for a public stoning in the town square, but the mob beat him to it by killing her along the way.

Thus we find this twisted story depicting the immorality of the time and passed down to us as a lesson for women. Notice that while the woman’s adultery was considered such a terrible sin that she was marked for death, the story fails to judge the mob of homosexuals and killers.
​
And we wonder why sexism has been such a problem in the Christian churches and Jewish Synagogues. Women were considered second class citizens and subservient to men at the time these verses were written. In the minds of many contemporary "religious" followers, they still are.