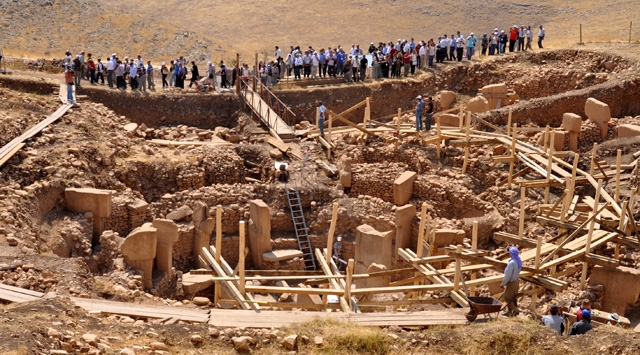 Discovered by the late German Archaeologist Klaus Schmidt in 1994, the massive carved stones of Gobekli Tepe in southeastern Turkey have only begun to be uncovered and examined by researchers. But already the site is considered among the more important historical discoveries of our time because it predates advances in human civilization by thousands of years.

So far the dig has exposed what appears to be a circular standing of 20-foot-tall and intricately carved T-shaped limestone pillars, surrounded by four rings of smaller upright standing stones, all facing inward toward an open pit. The stone pillars, some of them showing intricately carved figures of animals and insects, are all carefully seated in cut-out sockets in bedrock lying under the enclosure. All of this is at the top of a large earthen hill.

Researchers are estimating the age of Gobekli Tepe to be about 11,000 years, which is believed to pre-date Stonehenge by about 6,000 years. Careful mapping by ground-penetrating radar and geomagnetic instruments has charted at least 16 more megalith rings in the hill, all buried in a 22-acre site. Thus the dig to date, which has uncovered a portion of one of the rings in a one-acre excavation, has only given researchers a tantalizing peak at the treasures left to find.

Research teams think the site was a type of temple where people from the Persian Gulf may have traveled for miles to visit. So far no evidence has been found to suggest that anyone permanently lived at the site so it is believed to be an early attempt to build an elaborate cathedral.

The radar images show that more than 200 T-shaped pillars make up about 20 different circular “temples,” all of the pillars weighing an estimated 20 tons. The rocks are cut with smooth surfaces except for those with animal carvings, which amazingly protrude out from the flat stone surface. This indicates intricate craftsmanship suggesting a civilization far more advanced than the hunter/gatherer tribes believed to have existed at that time.

Some researchers have suggested that the T-shapes imposed in the designs of the standing stones imply a human form. While there was no effort to set them with human faces some had human arms carved into the lower half. That carefully carved human heads also are found at the site, possibly broken from statues, make it clear that the builders could have cut the human shape in the stones but strangely chose not to.

Construction of the temple site appears to have been going on over long periods of time. Younger structures contain smaller erected pillars that stood in rectangular rooms on floors of polished lime.

Within the circles, two taller pillars are placed facing each other in the center. Also there are stone benches designed to allow people to be seated. The carved pictograms on the stones appear to represent what may have been sacred symbols. They depict lions, bulls, boars, foxes, gazelles and donkeys among the mammals. Also snakes and other reptiles, birds and even insects are found.

There appears to have been a deliberate burial of the entire complex in later years. That suggests that whatever religious worship occurred there was considered “ungodly” by later religious groups that moved in, much as contemporary religions fight today. Thus there was a concerted effort to cover this amazing 22-acre complex of standing stones and hide all that it once stood for.

Archaeologists are consequently digging through an estimated 400 to 650 cubic yards of refuse, small limestone fragments, stone vessels and tools, plus human and animal bones. Ironically, the fact that they were buried instead of destroyed served to preserve the secret things hidden at Gobekli Tepe for posterity.
​
Unfortunately, before it was recognized as an important archaeological site, local farmers, stone masons and even miners damaged some of the artifacts over the years, not understanding what they were.