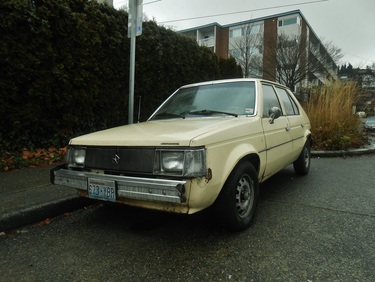 The Worst Car Ever Built

While working in Sanilac County, Michigan, there were two used-car dealerships operating on vacant lots between my news bureau office and the county courthouse. I suppose it was because I walked past them several times a day that I was inspired to buy that used 1970’s vintage Plymouth Horizon. Already plagued with rising costs of fuel due to the politics behind overseas  oil production I thought it would make a good economical vehicle to zip around in.

The salesman, whose name I cannot recall but a man I considered a good friend at the time, tried to discourage me from buying the car. He liked General Motors products and sneered at this particular vehicle. He called it a “Mopar,” a promotional name Chrysler was using for its products at the time. After buying the car I could not fault the dealer for trying to talk me out of it. The car was a lemon and I think he knew it. Its color was even yellow.

A ball at the tip of the gear shift lever fell off.

The distributor was located near the underbelly of the car and completely exposed to the elements. There was no splash pan under the car. Every time it rained and I hit a mud puddle on the road, cold water hit the heated plastic distributor cap and cracked it. As soon as water got on the electrical components everything shorted out, the car stopped running and left me stranded. I had to have a special splash guard made and installed to prevent that from happening.

It seemed that I could not drive the car anywhere without something serious going wrong with it. One cold winter night I was driving down a lonely country road on my way to pick up our daughter at a friend’s farm and the car engine just turned off. It would not restart. The road was frozen so I did not believe it was the distributor. I was in a fix. There was a howling winter wind blowing and I was not dressed for the weather. The nearest house was about a half mile away.

I braved the elements, walked to that house where I saw lights on. I knocked on the door but the people living there refused to answer the door. I suppose a strange knock in the night frightened them. I walked back to the car, chilled to the bone and anxious to get out of the weather. By now the car was getting cold. I realized that I might be in danger of freezing to death. There was no other traffic on that dirt road.

It was about another mile and one half to my destination. I discovered that by cranking the starter while the car was in gear I could move it slowly forward. I used the starter to go as far as I could. The starter gave up when I was within sight of the house where I was headed. I walked the rest of the way and from there called my wife and had her come to pick us up.

I had the car towed into town to a local mechanic. He found some kind of problem in the gas line that had stalled the engine. That was easy to fix. But the starter was another problem. I had burned out the one on the car, and a replacement part had to be ordered from Japan. Apparently parts if not all of the engine were made in Japan. I waited about a month or longer for the starter to arrive.

A few days after getting the car operating and back home again, I tried to start it for my morning trip to the office. It was early in the morning and the sun had not yet risen. I heard a strange noise then saw a flashing orange light in the snow beside the car. I knew this time the engine was on fire. I was so disappointed by then I remember sitting there for a while considering just letting it burn. But I soon came to my senses, got out, raised the hood, and used snow to snuff out the flames. I had the car towed once more into a Plymouth dealership to have the damage assessed. It cost me several hundred dollars to have the wiring and all of the other damaged parts replaced.

A day after I got the car home again, I had to make a trip to Detroit Metro Airport to pick up our daughter who was coming home on leave after finishing Army boot camp. I don’t know what possessed me, but I decided to take the Horizon, thinking that surely nothing more could go wrong with that car. By then just about every working part of the engine and drive train had been replaced.

The trip to and from Detroit went relatively well, at least at first. I got to the airport and enjoyed a happy reunion with our daughter. We stopped for lunch and then started for home. On the way I began hearing a rumbling sound and realized that a wheel bearing was breaking up. It was late in the day and I kept driving, keeping my fingers crossed. We made it home but by the time we arrived the bearing was making a serious racket. I parked the car in the back yard and vowed that I was never going to drive it again. I planned to get the bearing fixed then use the vehicle for a trade-in the next time I wanted to buy a car. We had three other vehicles; our pickup, the van and a second car in the yard so I could live without the Horizon.

The next spring my wife’s brother Wayne came for a visit. He saw the Horizon parked in the back yard and asked about it. I told him about all the troubles I had with the car and that I was never going to drive it again. He asked what I would take for the car and I gave him a very low price. He said he was sure the book value of that car was much higher. I said my price was all the value I thought the car had.

Like that used car salesman before hand, I attempted to talk Wayne out of buying that terrible car. I told him he was family and a good friend and I did not want him to get stuck with what I was convinced was a real lemon of a car. I said that if anything ever came between us, it was going to be that car. Wayne laughed and said that was nonsense. He said he was a good mechanic and didn’t think there was a car on the road he could not fix. He bought the Horizon.

After that, every time we had occasion to visit Wayne, the Horizon was up on jacks or on blocks in the driveway and it was obvious that Wayne was busy repairing something. The summer passed and that December, while the family was attending a Christmas gathering Wayne had a few drinks under the belt. I asked him about the Horizon. He looked me in the eyes and proclaimed: “That car should never have been built.” He then admitted that he could never keep it on the road more than a day before something else happened to it. He had spent a whole year constantly fixing it.

As I recall, Wayne managed to sell the car to some other poor guy in the area. After that he said he never saw it again. I am sure it ended up where it belonged, smashed flat in a scrap yard.
​
I should add a disclaimer here that the problems experienced with this one car should not reflect on the Chrysler Motor Company. We have owned various Chrysler products over the years and found them to be very good cars. I just think this particular Horizon had a curse on it.