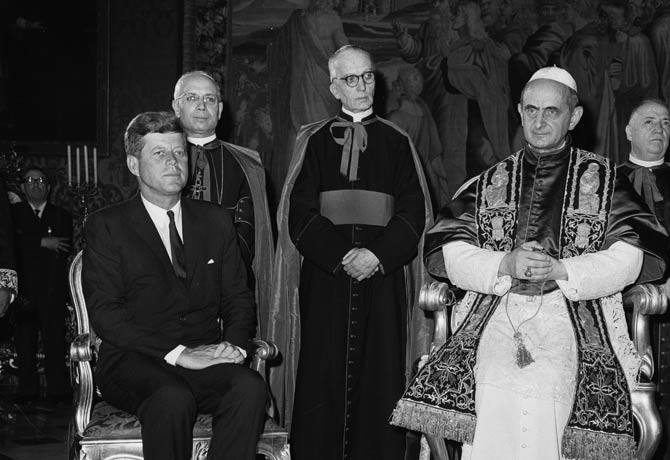 With Pope Paul VI
Jesuits Blamed for the Kennedy Murder

Because of the mysterious circumstances surrounding the dramatic assassination of President John F. Kennedy in Dallas, Texas, in 1963, there has been a multitude of conspiracy theories. To this day few people in the nation believe the Warren Report that placed the blame on a lone gunman named Lee Harvey Oswald.

--Fidel Castro and the Cuban military staged the killing in response to the Bay of Pigs fiasco, which was a failed attempt to stir a rebellion and remove Castro from power.

--Organized crime murdered both John and his brother Robert, then Attorney General, in response to their work in exposing and prosecuting major mob bosses.

--Vice-President Lyndon Johnson and then CIA Chief George H. W. Bush conspired either together or privately to remove Kennedy for political reasons.

--The Pentagon killed Kennedy to prevent his planned shut-down of the U. S. involvement in the Vietnam conflict.

All of these theories and others were deliberately pumped into the American pipeline as a means of directing media and public attention away from the real killers; the Jesuit controlled Catholic Vatican, according to One-Evil researcher Frank O’ Collins.

O’ Collins, in his complex maze of writings for a website that devotes a lot of space to attacking the Vatican, presents a powerful argument to support his allegation.

He said the murder was committed for two secret reasons that directly involved the power of the Jesuits over the United States. Kennedy allegedly had ordered the disbanding of the CIA and he also wrote Executive Order 11110 that threatened to shut down the Federal Reserve. The order authorized Congress to print $4.7 billion in interest-free cash and inject it into the nation’s economy.

O’ Collins wrote that “upon the brutal murder of President Kennedy, both sets of orders were rescinded the very next day.” He noted that Kennedy was the “last president to actively attempt to regain the sovereign right of the United States to mint its own currency. He is also the only president to have ever attempted to disband the treacherous CIA since its inception in 1949.”
​
He stated that the ordered assassination by Pope Paul VI was “both a conspiracy of the highest branches of government, relating to the most fundamental rights of Americans to govern their own destiny free from traitors and external influences of corruption and as such also represents a coup d’état from which the American people have never yet regained control.”