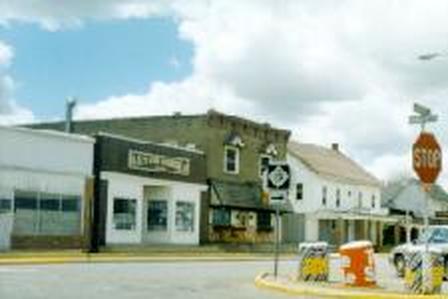 During a strange period when a budget crunch caused the Sanilac County Board of Commissioners to lay off all of the Sheriff’s road patrol, a terrible murder occurred in Peck, a normally quiet little Michigan village located a few miles south of where I worked as a county bureau reporter.

It seems that an old man that lived alone in his house, right across the street from the Globe Hotel and hardware store, was found bludgeoned to death in his bedroom. The house had been ransacked and it was apparent that the motive had been robbery.

With no deputies on patrol to investigate the case, the task of solving the crime fell on the Michigan State Police, who by the time this happened had degenerated from what I once knew as the best and brightest to a pack of men and women whose primary job was road patrol. Some of the troopers assigned to the Sandusky Post were not the brightest stars in the sky. I suspect that was why they were working there instead of at the more active posts in the state.

The troopers opened their investigation of the Peck murder case. Days passed and the morning report was always the same. The investigation was continuing but police have no leads. Anyone with any information was asked to please call the Sandusky State Police Post.

People in and around Peck said they didn’t know anything about what happened to the old man. No witnesses came forth. Forensic research in those days, at least in our rural area, amounted to little more than fingerprints and blood type.

Out of desperation the troopers imported one of their best detectives from the Bay City office a regional headquarters located about 50 miles away. The investigation continued for a few more weeks. It still remained unsolved.

Finally, when the courts began complaining of lost revenues for lack of fines and court costs from traffic offenders and felons being processed through the system, the county board of commissioners decided to put the deputies back to work. And miraculously the murder case was solved.

It seems that the deputies left on staff to operate the county jail had the murderer locked up in one of their cells all along. He had been arrested on another charge and foolishly bragged about his crime to a fellow jail inmate. That inmate tipped off the deputies.
​
Because of a rivalry that existed between the deputies and the Michigan State Police, and because of anger over so many officers losing their jobs, deputies kept silent about what they knew. It was a joke on the State Police and I suppose on the county. I am not sure the people of Peck saw much humor in it, however.