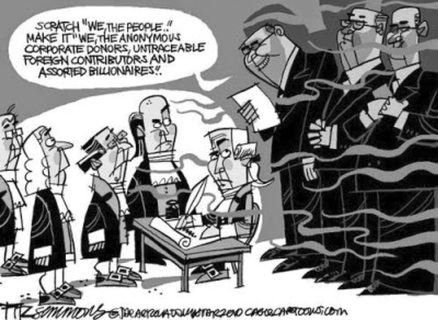 When I was in grade school I remember learning American history the way it is depicted in textbooks published in the United States. I heard about our wonderful capitalistic, democratic system of government and wondered why our way of life wasn’t accepted by nations all over the world. It was hard to understand why the Japanese would hate us so much that they would attack our ships at Pearl Harbor, or that we had to send soldiers to fight Communism in Korea and Vietnam.

Even while I was studying world history in college, I failed to grasp the significance of the U. S. capitalistic system and why it imposed so much hatred against our nation in the world around us. It was not until I got deeply involved in reporting government as a journalist that I began to understand the error of our ways. There was a shadow government working behind the scenes.

Our nation was promoted as a great republic, patterned after a Constitution and Bill of Rights written by men 200 years ago who wanted desperately to establish a way of governing people that guaranteed equality and fairness to everybody. But the United States quickly and secretly slid away from that framework to become another oligarchy; perhaps the most powerful and most deadly of its kind to ever exist.

In case the word oligarchy is foreign to readers, it is described in the dictionary as "a form of government in which all power is vested in a few persons or in a dominant class or clique; government by the few."

The U.S. might also be described as a plutocracy, which means a government or state in which the wealthy class rules. Nations operated for years under the rule of kings who lived in luxury at the expense of the heavily taxed working class.

It wasn’t until the U. S. Supreme Court’s "gang of five" slammed us with the concept of corporate "personhood" in its controversial 2010 Citizens United case that the reality of the U.S. oligarchy began to sink in.

Anyone who digs into the real historical record of American finance, and wades through the complexities of understanding the jargon, eventually understands that this nation and perhaps the European Union as well, has been controlled by a handful of rich families for a very long time.

Among the great "robber barons" of the Industrial Age were such names as J. P. Morgan, William Vanderbilt, Andrew Carnegie and John D. Rockefeller. These were the giants of the coal, steel, railway and oil industries. They wielded great power over all phases of the nation’s business, including the functioning of government.

The workers fought back against these kinds of power brokers which led to the establishment of labor unions. Those unions provided the badly needed labor to build the great war engines of the early and mid-Twentieth Century. Thus grew a "middle-class" of Americans who enjoyed a moderate level of wealth previously unknown among the working corporate slaves.

That brief period of middle-class wealth did not last long. We still speak of the middle-class as if it still exists, but these families have dwindled because of the extreme shifts in the world of finance. Jobs have dried up or moved overseas to countries where labor is cheap. Most who have jobs are not earning enough to maintain their old way of living. Even college graduates are struggling to find employment. And obtaining those college diplomas is so costly now graduates find themselves burdened for most of their lives just paying off student loans.

Even as we write this report, the Supreme Court is poised to put the final nail in the coffin for U.S. labor unions. The issue is whether workers in union shops and offices are required to pay union dues. The court is expected to hand down its usual 5-4 split vote that will spell the end of the last union shops in the nation.

This kind of imbalance was never supposed to have happened. The Constitution gives the power of making money to the Congress. Congress also has the power to regulate the value of our money. That document also requires that our money be coined in gold or silver. Paper bills, if used, must be backed by their printed value in gold or silver kept safely stored in government vaults. That was the way our forefathers planned it. It is now how things are done today.

Thomas Jefferson, a former president and one of the framers of the Constitution, once warned that "if we turn our monetary system over to the bankers our children will wake up as slaves to the country we fought to free."

It was on Christmas Eve, 1913, that the very thing Jefferson warned about happened. While many members of Congress were home with their families for the holidays, a key number of congressmen met in special session in Washington to pass the Federal Reserve Act. This is an unconstitutional act that turned over the nation’s monetary system to some key international bankers. The act was then signed into law by President Woodrow Wilson. Wilson was convinced by the bankers (or paid by them to say) that the act would provide a better system of stabilizing the monetary system.

The nation slid into oligarchy after the Federal Reserve came into existence. The rules for printing money were changed. Instead of being backed by legal tender stored at Ford Knox, our bills are now identified as Federal Reserve notes. This means they are loans. Some people doubt if there is any gold left in storage at Fort Knox today. There is nothing left to back up the value of the U.S. dollar except the people’s belief in its value.
America’s economy has been on a slippery slope ever since. The nation . . . in fact the world plunged into the Great Depression in 1928, we have endured numerous recessions, and the value of the dollar has been steadily declining.

Today the United States has assumed the role of a world bully. Since World War II we developed the most powerful military in the world and we have used it to fight unnecessary wars and establish military bases in every corner of the globe. Most of our tax money is spent on the military industrial complex. War is where great fortunes are made and built.

The nation has become so dependent on war to stabilize its economy, we have invented non-existent wars.

The War on Terrorism, established after 9-11 and during the presidency of George W. Bush, is an endless manufactured war that gives the Pentagon reason to maintain that military industrial complex, develop costly new weapons, and continue sending troops and our war engine where ever a conflict can be created.

Little money is left to maintain local infrastructure, feed the hungry, or cover the high cost of medicine. The looming destruction of the environment, caused by industrial pollution, is all but ignored. Our elected government leaders are no more than figureheads. They appear to be paid zombies sent to Washington and state capitals to argue over issues but fail to do anything other than what they are told to do by the real shadow government.
It all appears to have been patterned after George Orwell’s classic novel "1984."

Many contemporary economists who understand the nature of the corruption occurring in America's system of "high finance" predict a looming collapse. They say our dependence on printed paper money without gold or silver to back up its claimed value is a dangerous game, solely dependent upon the public's belief that the dollar has value.

The U.S. and Russia both appear to have shifted to crude oil to prop up the value of currency. And as we all know, oil is a very slippery substance. Even though the known amount of remaining crude oil in the ground is beginning to run dry, the OPEC Nations have recently chosen to reduce the price of oil. There appears to be a deadly game of chicken occurring in the financial world that may well end in disaster.

To review, it appears that the power brokers . . . the CEO's of industry, the high courts and manipulators of government may qualify to be members of the shadow government that controls our lives.