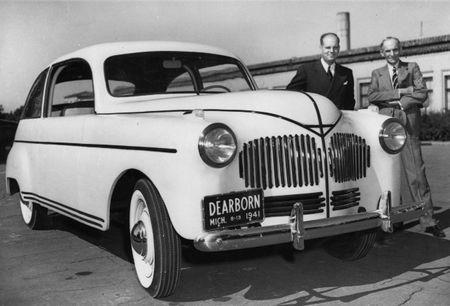 Back in 1941 as war clouds hung over Europe and the Far East and the United States was already gearing up for war, Henry Ford was designing a car made out of plastic. The car never made it to the Dearborn assembly line because all of the Michigan automakers switched production for the war effort after Pearl Harbor.
​
When cars began rolling out of Detroit at the end of the war, Henry Ford’s idea for a plastic car was forgotten. We didn’t hear of such things again until recent years, when new plastics were designed that were stronger and more durable than steel, did not rust on salt-covered winter roads, and tolerated extreme temperatures. Many automobile parts today are made of plastic and auto owners may not know the difference.

What was unique about Ford’s plastic car in 1941 is that the plastic body parts were not made from crude oil, as most plastics are today. Instead he found a way to make plastic from farm products like soy beans, corn and wheat straw. The Ford plastics were made from the plant fibers rather than vegetable oils. In one interview published in Iron Age Magazine, Ford mentioned hemp as an excellent source of the fiber plant stalks used in making plastics for his cars.

Ford’s motive for looking at plastic was three-fold. He wanted a lighter, impact resistant car that would be safer and less costly, a body that could be easily shaped into any design, and he wanted a product that would be beneficial to American farmers.

He told the New York Times that “the motor car business is just one of the industries that can find new uses for plastics made from what’s grown in the land.”

When the United States went to war late that year, the Ford plastic car was still in an experimental stage. While a prototype existed, there were still bugs to be worked out. It is reported that the plastic car experiment was turned over to engineers at Greenfield Village, but further work was halted when all U.S. auto production was halted. Assembly lines were converted for the construction of tanks, jeeps, military trucks and aircraft.
By the end of the war, the plastic car experiment was forgotten.

That the best source of fiber for making plastic cars would have come from hemp, a fast growing and perfect source of fibrous material, became illegal to grow in the United States in 1937, was a tragic (and perhaps planned) coincidence. Consequently the plastic industry shifted to crude oil and it has been mostly stuck in that groove ever since; At least in the United States.

Hemp plastic has been produced in Europe and China now for the past 15 years. There it is fast replacing oil based plastics because of its biodegradable and recyclable qualities and availability without oil dependence. It has become the preferred option to PP-gas fiber, high heat ABS and PC/ABS plastics. For good reason. It appears to be a safer product for storage of food products and liquids because it does not leach toxins.

In the United States, where plant fibers still are not being used to manufacture plastic, Americans were shocked a few years ago when it was revealed that the oil based plastics contained Bisphenol A (BPA), a chemical linked to cancer, infertility, asthma, heart disease and a variety of developmental disorders and health problems in children.

Plastics makers shifted to another chemical, Bisphenol S (BPS) as an alternative believed to be free of leached toxins. This plastic is being used to make soft drink bottles, milk bottles, food wrappers, and even the lining on the inside of canned processed foods.

In 2007, Nancy Wayne, a reproductive endocrinologist and professor of physiology at the David Geffen School of Medicine at UCLA, tested this alternative chemical after receiving complaints by other researchers in her field. She discovered to her horror that “the chemical had an immediate and profound effect on (non-human) embryos exposed to it.

“It scared us,” she said in a story that appeared in Natural News. Wayne said she wanted to study this matter farther but “I couldn’t get funding from the federal government to study it.” She said the FDA still maintains the level of BPA in the alternative chemical is safe for human consumption.

But “BPA is a huge business. Sometimes I wonder who the government is representing,” Wayne said.
​
Rather than fight the U.S. block against further research, Wayne said she turned to help at Shanghai University. There a graduate student, Wenhui Qiu, came to UCLA with financial assistance from her own government. She and Wayne have been busy using money from Shanghai to do the research needed to prove her conviction . . . that all plastics made from crude oil is toxic.