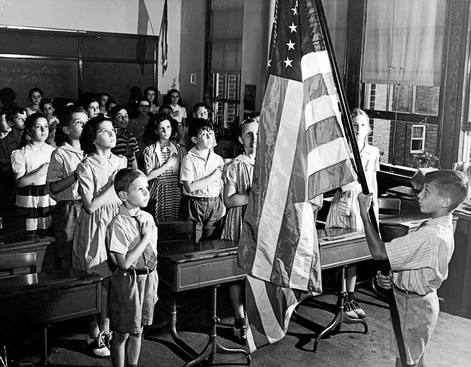 I Don't Say The Pledge Of Allegiance Anymore

Since the attack that started our war against terrorism, patriotic symbols like our flag, certain music and military parades have become a constant imprint into the minds of Americans.

There is nothing wrong with patriotism. National pride is the foundation of a strong nation where people can feel safe and secure. What I object to, however, is media and socially imposed patriotism for the wrong reasons, and the constant use of old and sometimes meaningless clichés designed to excite crowds for political purpose rather than ligitimate national defense.

I am especially bothered by the Pledge of Allegiance that we make to our flag. I stood with the other children throughout my years in the public schools, reciting that pledge with my hand over my heart. We did it faithfully every morning, and believing it meant something. Over the years I watched city councils, boards of county commissioners and township leaders stand, reciting the pledge.

I don't remember exactly when I stopped joining them. I recall a period when I felt strange reciting the pledge once I understood that it was a lie. I think it was while attending a city council meeting in Show Low, Arizona, that I stood up with everybody, but at that moment I rebelled. I left my hands at my side and refused to say the words. I do stand in reverence to a flag that always meant something to me. It represents a homeland that I still love and want to see fixed.

My problem: I actually read the pledge, considered what we were saying and concluded that it was laced with once great ideals that were no longer true.
Unfortuately, because of a variety of political, religious and financial reasons, nearly everything in that pledge has changed. The promises in the Bill of Rights have disappeared. The Amendments to our Constitution have become meaningless. The 1956 addition of the words "under God" has been found troublesome to many. Thus repeating the pledge, perhaps believing it, has become a senseless act.

For example, we say that we are pledging to "the republic for which it (our flag) stands." Except in political speeches where rhetoric is flying, few people even mention that we are supposed to be a republic anymore. The key word we use is "democracy." I have to admit that we are probably not even a democracy.

Ironically, if the United States is a democracy, it cannot be a republic. A democracy is a condition where the mob rules. Everybody is supposed to have equal say in how things are done. But we know this is not the case.

Because of the way our Constitution establishes the framework of our government, we still have all of the appearances of being a republic. We elect the people we want to represent our interests in Washington, in our state capitals and in our city and town councils and school boards. These people are supposed to listen to what their constituents have to say about the issues and then cast votes on their behalf. Except possibly for local boards and councils, do we really believe our representatives in state and federal offices are doing this anymore?

This is why we bemoan the Supreme Court decisions that have handed the power of government over to big corporations and special interest groups that use money to sway the way our elected representative's vote on issues. Our opinion no longer counts. We can't produce enough money to persuade (buy) our legislators to spend our tax dollars on the things we want on the home front.

Instead of helping improve our education system, repair our crumbling infrastructure, providing good health care for the people and taking care of our veterans and senior citizens, we are spending tax dollars for unnecessary warfare and developing bigger and more powerful weapons.

Instead of a democracy, the United States has become an olegarchy. We have a lot of people being cleverly controlled by a few very powerful men and women, mostly wealthy business leaders. We labor for these people for a mere minimal wage and struggle from paycheck to paycheck. Because the power figures are more concerned about profit than they are about caring for the Mother Earth, we are watching our planet die under our feet. Thus we are suffering from climate change, from failing crops, from rising costs of food and resources and the high price of meeting our medical needs.

The political fight this year is over an increase in the minimum wage from $7.50 to $15 an hour. The fight should be over taxing the corporations and the wealthy to pay for fighting climate change, repairing storm damage and feeding the starving people of the world.

We are concerned about Donald Trump's hair and about Hillary Clinton's secret e-mails instead of listening to the important ideas swelling from among the followers of Vermont Socialist Bernie Sanders. We seem to have forgotten that the major media outlets in the United States are owned by a handfull of big corporations that are hammering their olegarchitic ideals into the minds of the masses.

And this brings me to the next part of the pledge to the flag that troubles me. We say that we believe the flag represents "justice for all."

Our jails and prisons are filled. At last count the United States had 2.2 million people locked behind bars, the most per capita of any nation in the world. Many of these were the result of the nation's insane War on Drugs. As Dr. Paul Craig Roberts   http://www.paulcraigroberts.org/2016/03/26/does-the-united-states-still-exist-paul-craig-roberts/ , former Assistant Secretary of the Treasury recently noted on his website: our criminal and court systems now utilizes warrantless searches, plea bargaining (self-incrimination), and the lack of due process to arrest and convict people on "probable cause" and even seize their property.

There is yet another word in that pledge that troubles me. It is the word "liberty." No one in this country can honestly say they possess this.

Following is the definition of liberty from the American Heritage Dictionary:

Liberty for the masses is non-existent in America. With new and powerful police serveilance systems that can look through our clothes and the walls of our homes and allow police and government officials to watch and listen to everything we do and say, there is a tendency among many people to fear authority. Police now wear harsh military-styled uniforms and carry heavy armament. They raid homes in squadrons, sometimes shooting innocent citizens who attempt in any way to defend themselves.

This is why I no longer recite the pledge of allegiance when everyone around me does it. I still stand in reverence to the flag however. I knew her glory when it really meant something.