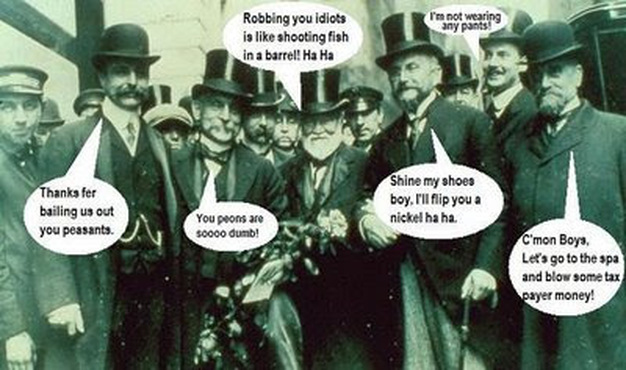 When digging into this story we learned that the former Secretary of Defense Donald Rumsfeld issued a report on September 10, 2001, that $2.3 trillion was missing at the Pentagon. It should have been a sensational news story but it was buried by the mysterious attack on the Pentagon and World Trade Center towers the following morning. Somehow, in our horror at being caught in an attack that rivaled Pearl Harbor, the lost of a couple of trillion dollars in military defense money slipped media attention and remained almost unnoticed.

This happened even before the United States went to war against Afghanistan and Iraq, and President George W. Bush declared his ridiculous "War On Terror" that has established a never-ending assault on any would-be terrorist individual or group anywhere in the world. Since then billions of more American tax dollars have gone strangely missing in the fog of the ongoing wars.

It is noted that $2.3 trillion amounts to about $8,000 pilfered from every man, woman and child in the United States. Nobody has ever accounted for this lost money. Some believe it was siphoned off by the various defense contractors like Lockheed Martin, DynhCorp and AMS. Conspiracy writer Uri Dowbenko declared: "The fraud is so egregious, in fact, that the sovereignty of the nation itself can be questioned when bogus accounting systems can mask the revenue streams and expenditures of federal agencies to such an extent."

Sprat's other accusation is that trillions more have been "lost" via the Federal Reserve. This agency is a non-governmental organization represented by the major banks that has been given Congressional power to print and distribute money, which is in violation of the Constitution. Only the Congress should have this power, but it was given away when the Federal Reserve was secretly created in 1913.

Just before President George W. Bush left office in 2007 and 2008 the nation's "housing bubble" collapsed and the banking system suddenly went into a crisis mode. When investment giant Lehman Brothers collapsed in 2008, Congress, stirred by stern warnings from financial giants like Federal Reserve Chairman Ben Bernanke, panicked and called for billions of dollars in loans to keep the nation's banking industry solvent.

The Congressional stimulus package pledged something like $9.7 trillion, but there has been confusion as to just how much money was actually created (printed) by the reserve and used. Texas Congressman Ron Paul, a known Libertarian, once said the reserve created $15 trillion for the bailout, and $5 trillion went out of the country.

Paul's complaint hits the nail on the head. He said he believes the government can get away with this kind of reckless spending because the Federal Reserve has the power to "create dollars out of thin air." This process devalues the dollar and causes runaway inflation, which has been going on ever since the Federal Reserve came into existence in 1913.

Just adding Paul's complaint that the Federal Reserve's extra $5 trillion was spent "overseas" and the Pentagon strangely misplaced $2.3 trillion even before the 9-11 attacks, we can reach a total of $7.3 trillion in lost money. It has been estimated that the government has spent more than another trillion dollars in military adventures in the Middle East since 9-11.

Since then there have been numerous reports of billions of lost money from the ongoing war efforts in both Afghanistan and Iraq that has gone unaccounted for. It is obvious that the pilfering has continued unabated by many of the subcontractors participating in providing services to the military or to restoring the bombed infrastructures.
​
So yes, Mr. Sprat. There appear to be trillions of lost and unaccounted for dollars of American tax money. So why is anybody surprised that our national debt has mushroomed to multi-trillions of dollars? Instead of raising our taxes and cutting services, perhaps it is time for the thieves to be found out and made to pay back what they have stolen.