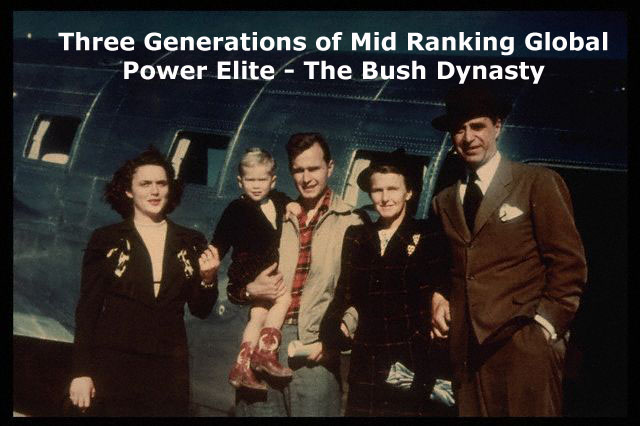 Most Americans know that two presidents named George Bush have served double terms in the White House. They also know that another son of George H. W. Bush named Jeb, a former Governor of Florida, made an unsuccessful bid for the Republican nomination for yet another family run for that same high office. Thus we have an understanding of a family dynasty that has been controlling the shape of the United States for about half of a century.

This dynasty, however, goes much deeper than what we observe on the surface. The Bush men were descendants of two other generations of Bush men who are rooted in powerful banking cartels, the Catholic Vatican, the control and sales of war weapons and the financial backing of nations driven to warfare since the beginning of the Twentieth Century.

The story is so complex that most historians and journalists have been unable to clearly explain to the people just what has been done to them just by the Bush men. And it is obvious that their nefarious deeds were not accomplished alone. They were the visual front for a massive “One World Government” movement that appears to have started with the Nazis, financed and driven by the Jesuits.

Hidden via membership in various front organizations that include The Carlyle Group, Skull & Bones, Freemasons, Bilderberg, Knights of Malta, Illuminati, Federal Reserve, Homeland Security, the Mafia and Society of Jesus, the operators working from behind the curtain are all trained and dedicated to the Jesuits with headquarters in Vatican City, Italy.

The mainspring of this story is George Herbert Walker Bush whose biography reads like an exalted member of the nation’s great heroes. He served as the forty-first President of the United States from 1989-1993, Vice President under Ronald Reagan, was Director of Central Intelligence, a U.S. Congressman and Ambassador to the United Nations under Richard Nixon. He served as a Navy aviator during World War II, got involved in the oil business and became a millionaire by the time he was 40.

George H. W. Bush’s son, George W. Bush also served two terms as the nation’s president, a second son, Jeb, was governor of Florida and currently running as a candidate for president. This family is going down in history as a major influence on the nation during a dark time in American history.

The dark side to this story is so incredibly scandalous it is difficult to believe that men who have risen to such heights could have been secretly involved in evil affairs so treacherous. The wickedness dates back four generations to the father and grandfather of George H. W. Bush. The shadows of the Bush story fall over such major events as the Kennedy assassination, the Iran-Contra scandal, the Watergate conspiracy, the CIA’s scandalous operations with Big Oil and the Middle East, the rise of Hitler and the Nazi Party, the mass murders of hundreds of thousands of blacks, Jews, Poles, Armenians and the mentally and physically handicapped and the secret placement of the Federal Reserve to carry out a complete deregulation of the nation’s economy.

What has been going on has had a major impact on nearly everyone in the world ever since the Jesuits gained power over the Vatican and then the world beginning in the year 1572. They began by offering the finest schools of learning in the world and then expanded to deal in commerce and banking. They have used the power of the Catholic Church to control the world wealth, promote world slavery, deal in drugs, launch world wars, and carry out an attempted purification of the races. The goal has been a one world government, but only on their terms. And that appears to be complete domination over the masses by the few who control the wealth of the world.

Like his father before him, George H. W. Bush attended Yale where he became a member of Skull & Bones, a secret society believed by many to be linked to the Illuminati, the Freemasons, Bilderberg and the Society of Jesus, all of them part of a strange and complex Jesuit social complex operating under the cloak of secrecy.

His father, Prescott Bush, a powerful banker and railroad man, helped finance the Nazi military during World War II, later became an advisor to President Eisenhower, a U.S. Senator from Connecticut, and a mentor to Richard Nixon. His grandfather, George Herbert “Herb” Walker was a banker and weapons dealer who helped finance the Nazi Party’s rise to power in Germany.

Volumes have been written about the wicked dealings of the Bush family and their cohorts who led the world into two world wars and an almost unending stream of regional conflicts that have helped maintain instability of world governments and control the finances of important banking figures.
​
It is all part of a complex plan being slowly carried out by the Jesuits who, after centuries, have suddenly placed their own man in the Vatican.