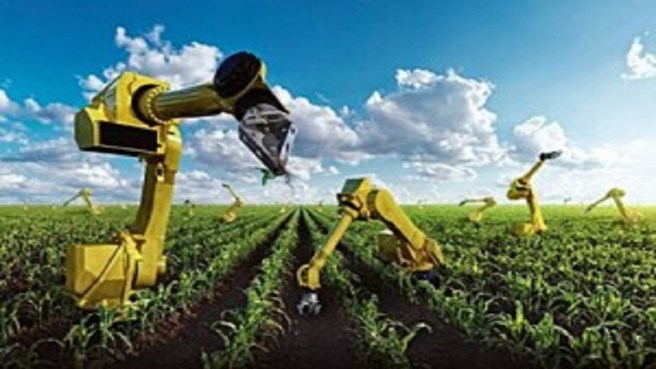 Robots On The Farm

When I was a young man living on my parent’s farm I knew the intense labor involved in operating a tractor with a two-bottom plow, throwing furrows on a 40-acre field. Once the soil was exposed we pulled a device filled with two rows of small “disks” that were, in essence, tiny blades that broke up the heavy clods and flattened out the soil. Then we used the tractor once again to pull a harrow that smoothed the ground and made it ready for planting seed.

Operating our small Ford-Ferguson tractor to accomplish all of this required hours and hours of riding on that tractor seat, my eyes constantly on the row I was following, making sure no part of the field was missed. I would come into the house in the evening, my body black from sitting in the cloud of dust I was generating. We didn’t have air-conditioned cabs on that old tractor in those days. It was long, dirty and tedious work, but it was a job I could do in my teenage years. And I actually enjoyed doing it. I was driving a tractor and plowing fields before I was allowed to drive a car.

All of the work done on our farm, and on the farms of our neighbors in those days, was labor intense. The farmers all had big broad shoulders and thick calloused hands. I was part of that neighborhood group of workers and it felt good to think that I was fitting in with them, as young as I was.

Since those days I have watched the small family-owned farms being bought up by larger operators. They were graduates from Michigan State University’s Cooperative Extension Service, and were being trained in the use of big farms, big tractors, and computers to calculate yields and costs of operating. The small farms were disappearing and those of us still living in the rural areas eventually found ourselves surrounded by big farm operations. We saw giant tractors so powerful they could literally plow, cultivate and plant a 200-acre field in a single swipe of a tractor and a line of equipment within less than a day. When it came time to fertilize or attack the weeds we saw aircraft dropping chemicals from the sky. Things were changing fast.

And as a news reporter I covered stories about a growing crisis on the farm. Profit margins were always thin. A bad growing season would often mean lost revenues. One very wet season caused the fields to get so muddy that we watched as harvest machines were pulled over the fields behind bulldozers. Farmers erected big metal grain bins with powerful driers in an effort to save the harvest. The struggle seemed to intensify with each passing year and I wondered how wise those farmers had been to run off to college and get the idea of operating big instead of doing things the old fashioned way. I was convinced that I was wise not to have returned to the farm after I left home.

Today farmers are dealing with climate change. This is obviously the worse crisis they have ever faced. And what we are seeing on the farm is a complete transformation of the way things are being done. Chemical farming has been big in the news, and it has been controversial. A lot of human illness is now being linked to the chemicals farmers are using to assure good yields of grain, beans, milk and vegetables.

And big farms also are dealing with labor costs. The migrant farm workers helped in keeping the costs down for many years but the Trump Administration is now threatening this important source of farm labor. Consequently the farmers are doing what they have always done when faced with a cash crisis. They create a way around the problem.

I remember when Michigan migrant workers were compromised by political demands for improved living conditions in the temporary quarters farms provided for them. When the state passed a bill requiring farmers to make such improvements as putting screens on the windows and equipping the cabins with hot and cold running water, the farmers invented and began using harvesting machines to pick their apples, blueberries, cucumbers and cherries. The migrant workers were not coming to Michigan any more.

Now the new thing is robot operated tractors, harvesters and other machines. Why wouldn’t they create such devices? When the robot automobiles first appeared, it was only a matter of time before robot aircraft were being used by Amazon to deliver packages and the military to deliver bombs on the enemy. Next we heard about robot operated ships at sea, controlled by men in offices thousands of miles away. Robotic trains are being developed to be operated by computers. It should not be surprising, then, that farmers are not only experimenting with, but introducing robot tractors and harvesting machines to their operations.

Among the first innovators for robotic farming was Manitoba canola grower Matt Reimer. After reading about robotic controlled cars and trucks, Reimer began experimenting with his big John Deere 7930 tractor. He discovered Pixhawk, a robotic autopilot system used in flying aircraft, and began figuring out how to use it to operate his tractor. He began his experiments in 2014. By 2015 he had his tractor operating without a driver in his harvesting operations.

Since Reimer’s success, we are beginning to see operating ghostly farm machines without drivers moving across the barren fields of not only Canada but the Midwest United States.

This is only the beginning of an exciting new era of driver-less cars, trucks, aircraft, trains, ships and now tractors. Robots are filling jobs in industry and some are even doing complex work in hospital operating rooms. Is the day soon coming when machines will be doing nearly all of the manual labor long endured by humanity?

This may be a time to be studying the way we live and earn our wages. If we play our cards right we may be approaching a golden age when mankind will be free to devote daytime hours to creative thought and innovative invention.