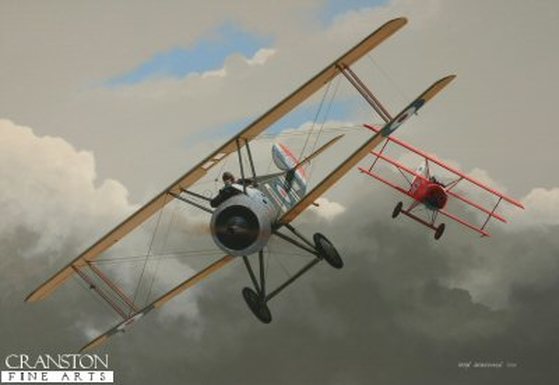 The First World War was a long and bloody global four-year engagement that raged from 1914 to 1918. More than 70 million soldiers fought that war leaving 16 million combatants and civilians dead by the time it ended.

The war brought about dramatic advancement in weaponry that included aircraft, tanks and mighty ironclad warships. Out of that war emerged several strange stories from the occult that are still being told to this day.

Among the strangest stories was the legend of Lady Sopwith, a beautiful blonde woman who allegedly flew through the skies of Europe in an English Sopwith E-5, teasing and playing dogfight with English pilots and shooting down German fighter planes.

Lt. Frederick Ardsley, a British flier who was reportedly the first to meet up with “Lady Sopwith” on January 9, 1918, said her biplane did not have the usual markings of the Royal Flying Corps. Instead it sported a bright red nose and a golden symbol with the astrological sign of Venus on the fuselage. The aircraft also carried a Lewis gun mounted over the top wing and twin machine guns on the fuselage, mounted directly in front of the open cockpit.

Ardsley said he was flying at 10,000 feet over Northern France when her aircraft appeared alongside of his. What was eerie about the encounter was that the other aircraft was silent. He could not hear the roar of its big Rolls-Royce engine.

As he looked the pilot of the other craft gave him a salute, then removed the goggled leather cap, allowing her long golden hair to unfurl in the slipstream. That was when Ardsley realized the other pilot was a very attractive woman.

As he stared in disbelief the woman began teasing him, making kiss-face expressions. Then she stood up in her open cockpit and performed a Can-Can dance before getting back down at the controls. Next, with an obvious laugh she pulled her plane off on a sharp bank to the left. Ardsley said he attempted to follow her but she outmaneuvered him, finally flying up into the clouds at an altitude that his own plane could not reach.

The strange “dogfight” was being watched by British ground observers. When Ardsley landed his squadron leader would not believe his story. There were no women pilots in the old Royal Flying Corps in those days.

After that encounter, other English pilots began reporting sightings of this same strange aircraft and the lovely blonde haired pilot who seemed to like to  tease them in the skies over the war-torn countryside. They gave her the nick-name “Lady Sopwith.”

Then a German pilot, Albert Roehl, who was captured after his plane was shot down behind Allied lines, said the British Sopwith that brought him down was flown by a lovely woman with blonde hair. “I should very much like to meet her,” he said during his capture.

Then for the weeks leading to the end of the war, numerous German aviators who were shot down and captured by Allies told of meeting up with a red-nosed Sopwith triplane flown by a militant female. Some of the others also asked to be introduced to the pilot as they were being led away to prisoner of war compounds.

The strange story seemed to have legs after those first encounters. Other pilots told of spotting that “blonde siren” shooting down Fokkers and Halberstadts over the war zone. The Allied infantry picked up on the fable, with soldiers claiming to have seen the strange aircraft with a red nose and Venus markings on the fuselage shooting German gunners out of machine-gun nests and performing a variety of aerial deeds overhead.

As the story spread the big question became: Who is Lady Sopwith? The theories were boundless.

The Americans perceived her as a prototype of a “secret squadron” of female pilots thrust into the war by the U.S. Army Signal Corps. They also suggested that she was a pilot on a secret mission for President Woodrow Wilson. Or that it was a publicity stunt dreamed up by George Creel, the U.S. Director of War Information.
​
In the end, if such a female fighter pilot ever existed during the war, she was never found out. Such a plane never landed in Allied airfields and the Germans didn’t speak of her either.