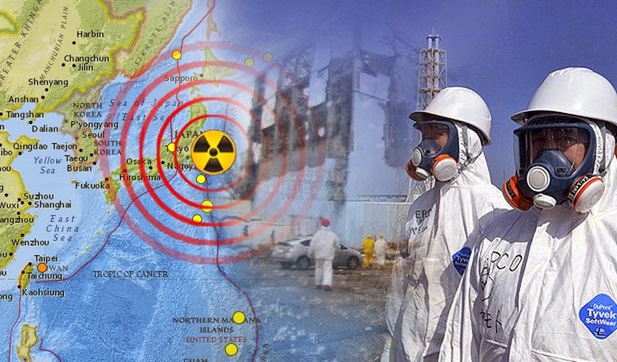 Just so you don’t allow the absence of media coverage to let you slip into a state of quiet complicity; we remind you that the 2013 disaster at Japan’s Fukushima nuclear plants is still ongoing. The three radioactive are still in meltdown. Plant engineers are still trying to figure out how to stop the ongoing harvest of slow death the various radioactive particles are spreading throughout on the entire world.

In the meantime toxic waste from the plants is making a large part of the nation of Japan too dangerous to live there. Prevailing westerly winds are blowing the aerial poisons eastward over North America where radiation levels are triggering Geiger counter readings at levels they should not be. And deadly isotopes from the site are now found in sea life all over the Pacific Ocean. Abnormal looking creatures are beginning to appear. Children all over North America are being born showing the results of high radiation exposure.

The media is silent about all of this. Officials at Tokyo Electric Power Co. (TEPCO) apparently have decided not to alarm the people about a problem that will not go away and that contemporary technology does not exist that can stop what is going on at Fukushima.

The bank of nuclear generators at the Fukushima Daiichi station in Northern Japan were slammed first with one of the most powerful earthquakes ever recorded on the planet, and then hit with a 10-meter-high tsunami that destroyed everything. Nearly 19,000 people died and about 16,000 lost their homes and jobs.

The disaster left three of the plants in a meltdown state. Workers wearing special radioactive-protecting suits risked their lives, some of them dying at the site, in heroic efforts to stop the inevitable meltdowns. They had hundreds of spent fuel rods in three reactors that were overheating, going into meltdown, and could not be removed.

TEPCO has been spending millions building containment walls and special robot machines designed to enter the toxic buildings and help engineers assess the damage and attempt to come up with a plan for stopping the ongoing horrors.

The company has been developing robots capable of swimming underwater and negotiating obstacles in damaged tunnels and pipes to search for the melted fuel rods. No matter how carefully the robots are designed, however, as soon as they get close to the reactors the intensity of the radiation destroys the robot wiring and they go dead.

There is action at the site. An estimated 8,000 workers are there around the clock, removing debris, building storage tanks, keeping pumps running and maintaining the pipes. The heated rods have to be in a constant state of cooling to prevent them from generating a violent nuclear explosion; one that would send a deadly cloud of radiated dust around the Northern Hemisphere of the world.

The immediate problem is that the radiated water has no place to go. For a while it was being drained into the open Pacific, but when radiation counts began climbing as far east as Alaska and the coast of South America, and sea life began dying off they began pumping the toxic water into giant storage tanks.

They now have nearly 100 million tons of radioactive water in storage, with no place to put it. If the tanks open up and leak into the sea, things around the world can only intensify. Sea creatures are not only too radiated to be food, but they are quickly dying off.
The fishing industry along the Pacific coast has been seriously damaged.

Humans, too long exposed to the radioactive dust in the air they are breathing, are beginning to show symptoms of poisoning. There are increased cases of cancer. Babies are being born with abnormalities. People are slowly getting sick from constant radiation poisoning.

TEPCO officials are obviously optimistic when they say they expect to have the decommissioning process at the site completed within the next 30 to 40 years. Until the deadly fuel rods can be located and safely removed, the work at the site is really stymied. And it may remain so forever unless new technology can be developed that allows humans to enter sites like that without committing suicide.

After Fukushima and Chernobyl, and with reports of trouble developing at yet another Ukraine nuke plant at Zaporozhye, it appears that it is due time for world power companies to be shutting down those old nuclear power facilities before any more of them go into meltdown.

The plants were built as an alternative to burning fossil fuels after researchers learned how to build nuclear weapons. But the deadly spill-out of nuclear waste from these power stations is proving to be worse than the dangers of coal dust. It is not clean energy and it is time we stopped using it.

Bob Nichols, a retired military ammunition plant worker who maintains a weekly report on nuclear counts in the atmosphere over the United States, says there are 1,946 different radioactive isotopes released from every nuclear explosion and every reactor “release” that occurs. He says there are presently 438 nuclear reactors operating at world power plants. There are 104 of them in the United States.

According to Nichols, every one of these reactors operates like a pressure cooker. To keep them under control the lid has to be removed regularly and the excess steam released into the air. That steam is laced with radioactive isotopes. Also the water used to cool the uranium rods gets contaminated with radioactive waste. While the plants are designed to circulate the cooling water and keep it contained, it can occasionally escape, as it did at Fukushima.
​
Nichols said some of this radiation accumulates for hundreds of years before it begins to slowly dissipate. And the more of it we dump into our environment, the more toxic the world around us becomes.