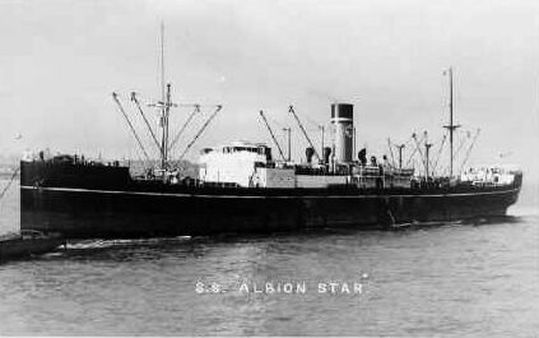 The Vestey family of Liverpool was involved in growing and butchering beef and they expanded their business ventures half-way around the world with the help of a small fleet of refrigerated ships.

Because of large cattle ranches in Argentina, the Vesteys were the first to transport beef in refrigerated ships from there and South America to the United Kingdom.

Thus was the origin of the old Blue Star Line which was registered in 1911.

The Albion Star, built in 1919, was the first of the ships that carried the name "Star," but she was not the first fleet vessel. Those early steamships were seized by the British Admiralty for the war effort, and the company didn't start putting the name Star in the fleet until the new line of vessels began sliding down the ways at the end of that conflict.

Strangely, the Albion Star was launched as War Hecuba, and then renamed Albionstar when it went into service. It didn't get its name changed to Albion Star until 1929.

At 450 feet, she wasn't a very large ship. But she was driven by two triple expansion steam engines and two twin screws that moved that refrigerated cargo from Liverpool to Australia and sometimes as far East as China and West to South America.
​
The Albion Star operated for the Blue Star Line and Union Cold Storage Co. Ltd, and possibly served the British Admiralty during World War II. In the end it was scrapped in 1948.