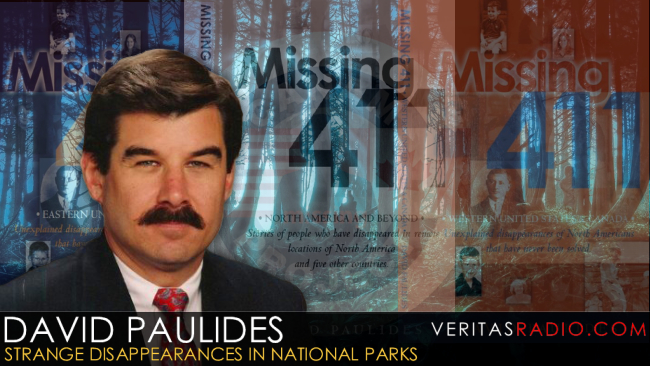 There is a little-known and little-reported phenomenon involving missing campers that has been occurring in U.S. national parks for well over a century.

Researcher David Paulides, who has published three books on this subject and appeared on Coast-to-Coast radio, believes at least 1,100 people, mostly children, are included among the missing.

Paulides, a former police officer that worked in San Jose, California, first learned of the peculiar disappearances from workers at nearby Yosemite National Park. When he began researching the story he discovered 28 clusters of disappearances from national parks all over the United States dating back to about the turn of the Twentieth Century. All of the cases have remained unsolved and most of the bodies were never recovered.

The bodies that have been found have created a mystery within the mystery, according to Paulides. Children that disappeared were found miles from where they went missing, and in places where it would have been impossible for them to reach. Some bones were found that were only the partial remains of the victims that disappeared.

A report in the website Silent Majority noted that most of the victims have been children aged 20 months to 12 years of age, and senior citizens ranging from 74 to 85 years.

About half of the children that go missing are found dead. The others, often found miles away from where they disappeared, have no memory of what happened to them.

In his research Paulides found a strange common thread linking nearly all of the cases.

--The children all had dogs with them. The dogs sometimes returned to the camp but without the children.

--The children were all playing close to their parents or guardians and within shouting proximity when they disappeared.

--Most of the children were wearing bright and colorful clothing.

--Children that are found often are missing their shoes. Even though they are miles from where they disappeared, investigators say their feet show no sign of cuts or blisters from long hiking.

--Huckleberries are almost always found in the areas where people go missing.

--The disappearances occur in the afternoon, in broad daylight.

--Stormy weather strangely occurs after a disappearance so tracking footprints is difficult if not impossible. Tracking dogs are unable to find a scent and often refuse to track.

--A common name for the park areas where the disappearances happen have names associated with the Devil. They include Devil's Gulch, Devil's Lookout, Twin Devil Lake and Devil's Punch Bowl.

Even though Paulides is a trained police officer and a published author researching a phenomenon occurring in the national parks, he said he is not getting cooperation from the National Park Service and its staff of officers. When he asks for the names of victims and information about the various cases, he is either denied access or asked to pay large fees for copies of the reports.

Paulides noted that in some of the cases where children have gone suddenly missing and a major search is being conducted, a team of Green Berets has strangely joined the search. Where they came from or why they were operating in the park remained unexplained.

There have been various theories about these disappearances. Many involve government conspiracies and packs of wild men living secretly in the wilderness.
​
The phenomenon of missing people appears to be occurring all over the world. In the Philippines it is said that park visitors are encouraged NOT to wear colorful clothing when they enter the jungle because the bright colors may be attracting whatever it is that is attacking the victims.