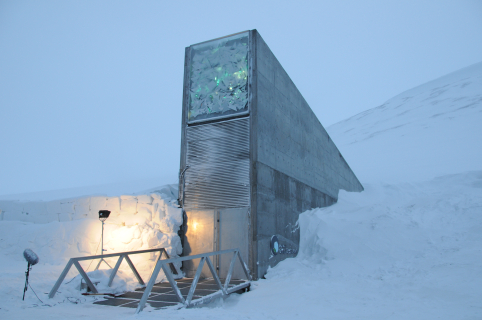 Something interesting is happening all over the world. As corporations like Monsanto work to genetically modify the crop seeds our farmers use and cross pollination is causing a mass destruction of the natural seed stock and even the weeds, environmental groups are busy gathering and storing pure seed for the future.

There is a concern that human survival may someday depend upon these seed banks because the GMO seeds are not only filled with toxic weed and insect killing chemicals, but often modified to contain other unnatural formulas that add color, resist spoilage and increase yield. Worst of all, the seeds sold by Monsanto, the largest producer, are hybrids. That means they do not produce seed stock for replanting for the next season.

At last count there were move than 1,000 "seed banks" established throughout the world. Among the most known is the Svalbard International Seed Vault, also known as the Doomsday Vault, established deep in the side of a frozen arctic mountain in Longyaarbyen, Norway, in 2008.

The Doomsday Vault was the project of the Global Crop Diversity Trust and the Consultative Group on International Agricultural Research, that collected and organized samples from seed banks all over the world to be stored in this underground vault. The site was chosen because of its remote site, the climate and geology, considered optimal for long-term cold storage.

Sadly, there has been an assumption that the northern arctic ice would remain intact, and the vault would always be a protected place. This may be changing because of a warming planet that is quickly melting the polar ice caps.

The Doomsday Vault is considered a global backup system for the planet's plant resources. The security at the site is tight. It is almost like the military systems nations use to guard against the accidental firing of an atomic missile. No single person can possess all of the codes needed to even enter the vault. The vault is never opened. The seeds are never tested. This is how important the Svalbard Vault is considered at a time when the world appears to be insanely rushing toward possible extinction of most, if not all species.

Some of the other important seed banks include the Millennium Seed Bank Project, located at the Royal Botanical Gardens, Kew, United Kingdom, where more than 24,000 global species of plants and their seeds are stored and carefully protected.

Perhaps the oldest seed bank is the Vavilov Institute of Plant Industry at St. Petersburg, Russia. It was established in 1894 by Nikolai Vavilov, a Russian biologist and plant breeder. The collection there contains hundreds of thousands of specimens from around the world. For a time private industry threatened this historic facility. Plans to destroy it to make way for a private housing development were overturned by the Russian government in 2015.

More than 90 percent of the plants at St. Petersburg are believed to possess traits that could be critical to maintaining productive fruit harvests in many parts of the world. That is because climate change, new diseases, a rising number of pests and drought is weakening the varieties now grown. Because of the way it was established, mostly as a field collection, it would take years to relocate the plants.

Yes Jack Sprat, global seed banks have been established because a lot of people are hoping a few humans will survive what is about to befall the world. When the day comes that we need them, hopefully those seeds will be available and still potent enough to revive the natural world as it was in the beginning.