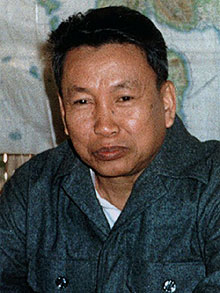 He was born Saloth Sar but known to the world as Pol Pot, one of the most malicious killers that ever lived during the four years he served as Prime Minister of Cambodia and leader of the Khmer Rouge. He is the only person in history known to have ordered genocide against an entire nation and he ended up killing an estimated 3 million Cambodians.

It was political and military meddling of the area by the United States that helped Pol Pot slide into power. It took an overthrow by the neighboring Vietnamese military that drove him out of power.

During the four years he ruled, from 1976 to 1979, Pol Pot and his Khmer Rouge militants ravaged Cambodia, murdering the upper class and forcing everybody else, no matter what age, gender or health into slave labor in the fields. The people were fed on rations so small they starved to death. Babies were torn apart limb-by-limb.

Pol Pot may have born into poverty, but he had amazing advantages that might have made him a good leader. When he was a child, Cambodia was part of French Indochina. When he was 20, he went to Paris on a scholarship, but dropped out of school after getting interested in Marxism. He returned to Cambodia in 1953 and joined an underground Communist movement.

The next year Cambodia earned independence from France and came under the rule of Norodom Sihanouk in a royal monarchy. In the jungle, Pol Pot formed an armed resistance that became the Khmer Rouge, and launched a guerrilla war against the Sihanouk government.

This is when the United States got involved. In 1970, while engaged in Vietnam, the U.S. backed a military coup that ousted Sihanouk from power. Sihanouk retaliated by joining with Pol Pot and together they battled against the new Cambodian military government. When US forces invaded Cambodia to root the North Vietnamese from their encampments along the border, they only succeeded in driving these forces deeper into the jungle where they also allied themselves with the Khmer Rouge.

Thus Pol Pot was gaining political and military strength, mostly because of U.S. affairs in Vietnam. Between 1969 and 1973 the U.S. bombed North Vietnamese camps in eastern Cambodia, and in the process, killed an estimated 150,000 Cambodian peasants. The Cambodians fled by the droves into Phnom Penh. All of this lead to economic and military destabilization in Cambodia and a wave of popular support for Pol Pot.

When U.S. forces withdrew from Vietnam in 1975, the Cambodian government lost its American military support. The Khmer Rouge army marched into Phnom Penh and seized control of Cambodia. Pol Pot suddenly ruled the country. And this is when the man’s insane reign of terror began.

He renamed the country the Democratic Republic of Kampuchea, established a new calander and declared "this is Year Zero." Then he set about purifying the country. All signs of western culture, capitalism, city life, religion and high society was banished. Doctors, lawyers, and other important figures were murdered. Embassies were closed. Newspapers and television stations were shut down. Radios and even bicycles were confiscated. Mail and telephones were banned. Cities were evacuated by force. Even money was forbidden. Schools were closed. Hospitals and doctor’s offices were shuttered. Children were removed from their homes. There was a purging of anyone of other nationalities, religious leaders, and anyone suspected of not being loyal to Pol Pot. Those not shot or axed was sent to work in the fields, mostly water-filled rice patties.

Two million people were evacuated at gunpoint from Phnom Penh. An estimated 20,000 people died in that death march alone. The name "killing fields" became synonymous with what was happening in Cambodia. Workers were starved and worked to death. They lived on a diet of a single tin of rice per person every two days. They worked under the armed direction of Khmer Rouge soldiers.

Thousands of people were tortured into giving false confessions. Some were shot without even being questioned.

On Christmas Day, 1978, and three years after U.S. forces moved out, the Vietnam military invaded Cambodia. Pol Pot was deposed and the Vietnamese installed a puppet government.
​
Pol Pot fled into Thailand with some of the Khmer Rouge loyalists and from there began a 17-year-long guerrilla war against the Cambodian government. He was arrested in 1998 and charged with war crimes. He died before he was brought to trial. They said it was a heart attack. He was 73.