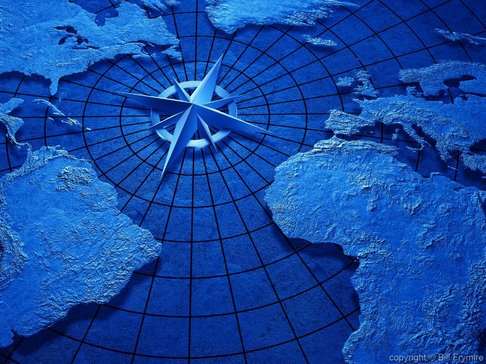 Our doomsayer Jack Sprat has listed the magnetic pole shifting of the Earth as issue number 12 on his long list of concerns. And it is true, a lot of people who keep tabs on just where North is on the compass have noticed that true North has been changing a lot. Some say it once shifted almost to the tundra regions of Northern Russia before returning northward again.

At the moment the world’s north magnetic pole is located in northern Canada, about 600 kilometers from the remote little town of Resolute Bay, says Larry Newitt, a scientist for the Geological Survey of Canada.

Newitt, like other scientists who keep track of the magnetic field, know that the pole seems to be in constant motion.

Newitt said the pole has been moving around at an average speed of 10 kilometers per year, and more recently accelerating to 40 kilometers within a year. He says at the speed and direction it is moving, it may reach a point in Siberia in a few decades.

Geophysicists say the planet’s magnetic field also appears to be weakening. Globally they say the entire magnetic field has weakened about 10 percent in the last 100 years. Thus there is concern among some that the magnetic field may be collapsing.

So what is going on? Is the planet about to flip completely around, with North becoming the South Pole and vice versa? Scientists tell us that all planets and even the Sun go through complete pole shifts from time to time. If it is happening to the Earth, how will it affect us?

The effect probably would not be noticed, suggests Gary Glatzmaier, a professor at the University of California. He says reversals take a few thousand years and during that time, the magnetic field "gets complicated." He said the magnetic lines of force, or "poles" might emerge anyplace on the surface. But Glatzmaier believes the magnetic field would continue to exist and protect us from space radiation and solar storms.

Flips like this have happened in the distant past. Scientists say studies of records of magnetism in the ancient rocks suggest the pole reversals occur about every 300,000 years. The problem is that the last known reversal happened 780,000 years ago, so we are probably long overdue for it to happen again.

What remains a mystery is whether, during the slow process of reversing the poles, the spin of the planet changes. If North moves farther and farther south, will the planet turn so that the climate changes flip as well? That might explain why researchers are finding the remains of trees, animals and streams that once existed under the Antarctic ice and why wild animals that grazed on green vegetation have been found frozen in the muck under the northern tundra.

A NASA website barks assurance that magnetic pole reversals are a common occurrence that happens so slowly that there is nothing to fear. It would not spell the end of the world.

One NASA report said that : "Geophysicists are pretty sure that the reason Earth has a magnetic field is because its solid iron core is surrounded by a fluid ocean of hot, liquid metal. . . The flow of liquid iron in Earth’s core creates electric currents, which in turn create the magnetic field."

While nobody is quite sure why the poles reverse, "there is nothing in the millions of years of geologic record to suggest that any of the doomsday scenarios connected to a pole reversal should be taken seriously," the NASA site concludes.