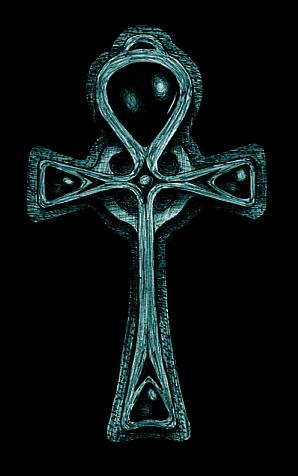 The Message Within The Ankh

The ankh is an ancient symbol that has been used and perhaps abused in religious context for thousands of years. The symbol is found in the art of ancient Egypt. It was used by the Coptic Christians as a sign of the cross. Witches even today see the ankh as a symbol of life and immortality.

This symbol, an oval mounted at the top of a Tau, is often used as an amulet. It offers the appearance of a key and many believe it has magical qualities, granting the wearer health and happiness. Some have called it the Key of Life because of its creative power. The loop, which is shaped somewhat like a vagina, is considered to be the feminine, while the T shape is masculine. Together they reflect a continued existence.

All of these descriptions of the ankh help us understand its true meaning, although they only touch the surface of the deep significance of this symbol.

One student of the esoteric recently revealed an important truth that has been forgotten since the days when the Egyptian Pharaohs one revered the ankh. He said the Egyptian Stele of Revealing is depicted in the tall slender figure of Nuit, the symbol of the Universe, bent over from "above the gemmed azure" in ecstasy "to kiss the secret ardors of Hadit."

The word azure means a light purplish blue color. Those who have studied Aleister Crowley’s Book of the Law understand that while Nuit represents the living universe, Hadit is the energy that makes everything go. Nu is the feminine component of our universe while Had is the masculine. They are inseparable for they must work together to make the universe not only exist, but run.

Nuit explains to us in the verses: "I am nothing: they do not see me. They are as upon the earth; I am Heaven and there is no other God than me, and my lord Hadit . . . "I am Infinite Space, and the Infinite Stars thereof."

Hadit explains that he is "the complement of Nu, my bride. I am not extended, and Khabs is the name of my House. In the sphere I am everywhere the center, as she, the circumference, is nowhere found. Yet she shall be known and I never."

This, in a nutshell, appears to be a description of Zen Consciousness. We understand that to grasp this concept, one might consider a very small dot that can barely be seen by the naked eye that is surrounded by a circle so vast that it expands beyond the human ability to see it. By thinking of these two abstracts, and considering compressing the dot much as possible, and expanding the outer limits of the circle toward infinity, the student of Zen might come to an understanding of all.

The circle at the top of the ankh is the very image of Nuit, bending over to kiss Hadit. The circle is therefore symbolic of the vast universe. Rather than a cross, the Tau image below is a picture of three powerful rays of light. Notice that each spreads wider as it stretches farther from the center. Thus the image might be interpreted to be that of "a jewel-locked star in the heavens."

More than this, the Milky Way, the galaxy in which our solar system spins, is calculated by scientists to have about 100 billion suns, or stars. Each of these stars is part of a vast communication system. All of the stars are full of the energy of the cosmos and communicating with one another, and with the planets that circle them.

By amazing coincidence, or perhaps by design, a healthy adult human brain contains about 100 billion neurons, all of them, just like the stars, in constant communication with one another. Thus there exists a peculiar parallel between the human brain and our galaxy.

Everything in our universe follows the same design. Stars spin in swirling galaxies and planets swirl around the stars. When we look through powerful microscopes we see atomic particles imitating the actions of the stars.

Is it possible that we exist within the computer and that we are operating within the confines of the electrodes within the machine? If so then the power points appear to us as a great circling galaxy in space. We might perceive of them as stars.

If the oval within the ankh represents the vastness of empty space that is Nuit, could it not also reflect the galaxy in which we exist? Could it not be a reminder of a secret that we exist within a computer matrix?

Science today is developing the technology for advancing the computer to match the mechanics of the human brain. We are becoming like gods with the very power of creation. It is possible that we could develop such a matrix and put ourselves within it before we destroy ourselves? And this might happen because we failed to tend to the garden . . . the planet on which we live.