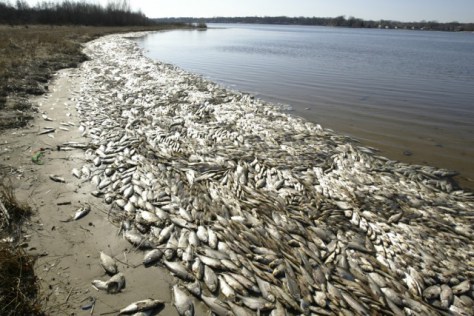 A well-written report by Ian Sample, Science Correspondent for the UK Guardian, outlined a decade ago how rising carbon dioxide levels from industrial pollution in our atmosphere is increasing the acidic content of the oceans and killing the tiny marine organisms at the bottom of the food chain.

That report alone should have shaken world leaders enough to have launched an international crusade to stop emissions of carbon based fuels. Many were hearing the warnings but the U.S. leadership under then President George W. Bush, turned a deaf ear.

The changes in the water have been particularly affecting marine organisms that grow protective shells. Scientists warned that if greenhouse gas emissions continue unabated, “the entire Southern Ocean, which stretches north from the Antarctic coastline and sub-arctic regions of the Pacific Ocean, will soon become so acidic that the shells of marine creatures will soften and dissolve,” the story said.

It said the loss of these creatures at the lower end of the food chain could have “disastrous consequences for larger marine animals. North pacific salmon, mackerel, herring, cod and baleen whales all feed on pteropods or sea butterflies, one of the species under imminent threat.”

Carbon dioxide is a by-product from burning fossil fuels and other industrial processes. When carbon dioxide gets in the rainwater, and consequently mixes with the oceans, “it strips out carbonate ions dissolved in surface waters, so there is less available for marine organisms to build calcium carbonate shells and exoskeletons from,” Sample explained.

The story said the rise in acid content of the oceans was occurring much faster than scientists originally thought. Imagine what has been going on in our oceans since that date.

One study by an international team from Britain, the U.S., Japan and Australia indicated that the water would be too acidic for shell formation by 2050.

Experiments by Victoria Fabry at California State University in San Marcos showed that the shells of these sea creatures begin to dissolve rapidly when exposed to higher levels of acidic water. Pits form on the surface of the shells and then external layers peel away.

Sample’s story was but a premonition of big trouble that was about to strike the $111 million oyster industry on the U.S. West Coast. That very year most of the millions of Pacific oysters in Washington’s estuary failed to reproduce. The failure continued each year since and now has spread south as far as Los Angeles.

Scientists studying the problem are looking at shifts in ocean chemistry linked to carbon-dioxide emissions. They warn that this growing issue is imparing sea life faster and more dramatically than they had expected.

Oyster producer Brian Sheldon said that the dramatic effects of ocean acidification are a clear “sign of things being out of balance. And that scares the living daylights out of me.”

Since that story was published, not only has the release of carbon emissions continued unabated, but the Pacific Ocean was slammed with radiation from the Fukushima disaster in Northern Japan. We are only now beginning to discover the complex impact this has been having on the sealife in that massive body of water.