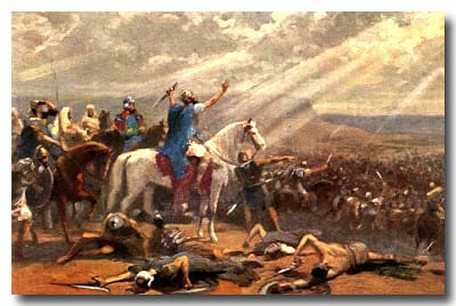 God Stops The Spin Of Earth?

Of all the peculiar stories packed in the Old Testament the ones claiming that God stopped the rotation of the Earth . . . for a full day to assist Joshua in his battle against the Amorites . . . and the caused the planet to spin backward for Isaiah . . . are scientifically impossible to accept.

A lot of hard-line Bible thumpers argue that if God has the ability to create the heavens and the Earth, he also can physically magically stop the Earth’s rotation. But why would He choose to do this when the act would create literal chaos and devastation not only on the Earth, but even in the Solar System? Other miracles could have accomplished the same effects without going to such extremes.

In Joshua 10 we read about the intense activity in which Joshua’s army is busy destroying every man, woman and child of the Amorites who were living in the land of Canaan. This was not because the Amorites were evil. They were just unfortunate to have chosen to occupy land that God decided to give to the Israelites after they escaped from captivity in Egypt. Thus they had to be eliminated.

In verse 11 we read that "the Lord cast down great stones from heaven" upon the fleeing Amorites. That wiped out a lot of them, but then "more died with hailstones than they whom the children of Israel slew with the sword." Oh there was a bloody slaughter underway that day.

But there was too much killing to be accomplished within the hours of a single day so Joshua called upon God for help. In verses 12-13 we read that God commanded: "’in the sight of Israel, Sun, stand thou still upon Gibeon, and thou, Moon, in the valley of Ajalon.’ And the sun stood still, and the moon stayed, until the people had avenged themselves upon their enemies. Is not this written in the book of Jasher? So the sun stood still in the midst of heaven, and hasted not to go down about a whole day. And there was no day like that before it or after it."

The final sentence, that there was "no day like that before it or after it" appears to contradict the Book of 2 Kings 20:8-11, which describes a time when God answered a request by Isaiah to prove himself to King Hezekiah.

"And Isaiah said, This sign shalt thou have of the Lord, that the Lord will do the thing that he hath spoken: shall the shadow go forward ten degrees, or go back ten degrees? And Hezekiah answered, It is a light thing for the shadow to go down ten degrees: nay, but let the shadow return backward ten degrees. And Isaiah the prophet cried unto the Lord: and he brought the shadow ten degrees backward, by which it had gone down in the dial of Ahaz."

In other words, God not only stopped the rotation of the Earth, but he reversed the rotation by ten degrees so the sun’s shadow on the sun dial reversed.

As unbelievable as the story sounds, advocates of the Bible story often refer to a circulating story that NASA engineers once were using an advanced computer to calculate time. They were astounded when the computer reached a certain point in the distant past and suddenly stopped at a certain date. The computer indicated that this particular day did not exist.

The NASA story has been declared an urban myth. A computer is nothing more than a machine that cannot detect a missing day without a fixed reference point, based on astronomical and historical records, which do not exist.

Another severe problem with the story of some great force (God) stopping the spin of the Earth for a day or for even a few minutes would be the effect it would have on the entire planet. For example, the planet is constantly spinning at a rate of about 1,000 miles per hour at the equater. At the North or South Poles the spin is non-existant. Anyone standing at the equater, or at any point between there and the poles would be thrown off their feet and perhaps flung through the air along with homes, trees and anything else that happened to be in place.

If God really stopped the Earth's spin for a day Joshua's army would be in no condition to continue murdering the Amorites. The soldiers would be lucky to still be alive. And there would probably be no Amorites left to kill. Thus stopping the spin of Earth would be somewhat pointless and silly.
​
But as the Christians like to believe . . . God can always work miracles. It just seems that He might have picked a simpler way of getting the job done than throwing the complex solar system out of balance.