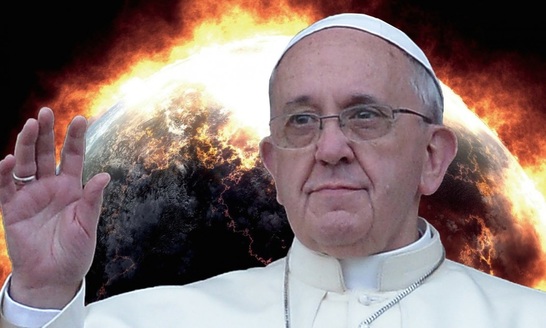 Is The Vatican Fulfilling An “End Times” Prophecy?

One of the things that I have found interesting about the Christian Bible is the accuracy of some of the prophetic messages. Many, like the predicted rebirth of the “Dry Bones” that became the modern State of Israel have been fulfilled.

But there is one prophetic and troubling message found in the Book of the Revelation, Chapter 17, verses 10 and 11, that have left me confused and scratching my head . . . that is until quite recently.

The verse reads: “And there are seven kings: five are fallen, and one is, and the other is not yet come; and when he cometh, he must continue a short space. And the beast that was, and is not, even he is the eighth, and is of the seven, and goeth into perdition.”

You can study a verse like that until the cows come home and it does not seem to make any sense.

But a published paper by Paul W. Kincaid that appeared in Hebrew Vision News began putting pieces of that puzzle together. It was written just after Pope Francis was declared Pope and Pope Benedict XVI was moved into seclusion and living quietly, still alive at the Vatican.

It is perhaps interesting to note that Kincaid is identified in Wikipedia as a British science fiction writer. While the website he sponsored, Press Core, was apparently the original source of the Revelation story, that site, like the other website that has cast a critical eye on Pope Francis and the Jesuit controlled Vatican, Evil-Eye, have both disappeared. When you Google the two sites you get zilch.

Fortunately the article was copied by Hebrew Vision News, which still exists. And this is how Kincaid interpreted our complicated Bible verse:

Back in 1929, during the reign of Mussolini’s fascist Italian government, Pope Pius XI, Benito Mussolini and King Victor Emmanuel III signed a Lateran Treaty which established Vatican City as an independent state ruled by the bishop of Rome. The bishop, of course, was the Pope. Thus Pope Pius XI became the first king of Vatican City.

Pius XI was succeeded by Pius XII, John XXIII, Paul VI and Pope John Paul II before Pope Benedict XVI was seated. These were all considered “kings” of the nation of Vatican City. This appears to fulfill the prophetic message: “And there are seven kings; five are fallen and one is, and the other is not yet come; and when he cometh, he must continue a short space. . . “

Kincaid notes that the odd moving of Pope Benedict out of power and replacing him with the Jesuit, Pope Francis, is an unprecedented event. It means that two Popes are now living in Vatican City. This means that “one is, and the other . . . when he cometh, he must continue a short space . . . “

Thus it appears that “Antipope Francis is the eighth and last king of Vatican City,” Kincaid wrote.

Understanding the final portion of that strange verse requires a close examination of the full seventh chapter of Revelation 17:

“And the angel said unto me, Wherefore didst thou marvel? I will tell thee the mystery of the woman, and of the beast that carrieth her, which hath the seven heads and ten horns. The beast that thou sawest was, and is not; and shall ascend out of the bottomless pit and go into perdition: and they that dwell on the earth shall wonder, whose names were not written in the book of life from the foundation of the world, when they behold the beast that was, and is not, and yet is. And here is the mind which hath wisdom. The seven heads are seven mountains on which the woman sitteth. . . “

The last sentence in this verse identifies the seven heads as the seven mountains "on which the woman sitteth." This woman, the "Whore of Babylon," is Vatican City, which rests on seven hills. The Catholic Encyclopedia clearly identifies it as "the city of seven hills, that the entire area of Vatican State properties now confined."

Verse 18: "And the woman which thou sawest is that great city, which reigneth over the kings of the earth."

Revelation 17:4-5 describe the Vatican as it appears today: "arrayed in purple and scarlet color, and decked with gold and precious stones and pearls, having a golden cup in her hand full of abominations and filthiness of her fornication: And upon her forehead was a name written, MYSTERY, BABYLON THE GREAT, THE MOTHER OF HARLOTS AND ABOMINATIONS OF THE EARTH."

Kincaid notes that Verse 17 also identifies the ten horns as "ten kings who have not yet received a kingdom, but who for one hour will receive authority as kings along with the beast. They have one purpose and will give their power and authority to the beast. They will make war against the Lamb, but the Lamb will overcome them."

There has been much speculation as to just which nations these ten horns represent. Some suggested the European Union. But the EU began as six members and grew to 28 states. England has recently voted to withdraw from membership. The EU has never numbered exactly 10.

Kincaid speculates that this prophecy may be referring to the Vatican's plan for a New World Order. He wrote that "The United Nations Organization (UNO) Security Council, which claims authority over the world, currently has five permanent members and ten temporary heads (ten kings who have not received a kingdom."

He noted that in 2009 the UNO divided the world into ten economic regions, which the United Nations and the Club of Rome call "The Ten Kingdoms." They are identified as the North Americas; the European Union; Japan; Austrailia plus New Zealand, South Africa, Israel and the Pacific Islands; Eastern Europe, Latin America and South America; North Africa and the Middle East; Central Africa; South and Southeast Asia and Central Asia.

So how does Kincaid explain the reverence to the beast ascending from the "bottomless pit" and then going into perdition? The word perdition is another way of saying "spiritual ruin" or "damnation."

Christians have long assumed that "bottomless pit" is a reference to Hades or Hell. But Kincaid examines this sentence from a different perspective. He perceives the catacombs that go deep under the Papal Basilica as this bottomless pit.

"The soil on which the City of Rome is built, as well as that of Vatican City, is of volcanic origin. Alluvial deposits are found only on the right bank of the Tiber, on the downward course of the stream, below the Vatican. This is what Revelation 14:9-11 is referring to as a lake of fire burning with brimstone."

He noted that the catacombs under the Vatican amount to a vast network of passages, dropping several stories in depth. "The labyrinth of galleries is incalculable. It has been asserted that if placed in a straight line they would extend the length of Italy.
​
Old volcanoes are not dead volcanoes. In fact, Kincaid notes there has been evidence in recent years that the one under Rome is waking up. A geyser-like fumarole or mudvolcano appeared just off the coast, 100 meters from where the new port of Rome was being constructed. It is believed lava may be creeping into some of the passages under the Vatican.

This may explain Revelation 19:20: "And the beast (Pope Benedict XVI) was taken, and with him the false prophet (Antipope Francis) that wrought miracles before him, with which he deceived them that had received the mark of the beast, and them that worshiped his image. These both were cast alive into a lake of fire burning with brimstone."

The controversial Catholic priest St. Malachy once predicted: "In the final persecution of the Holy Roman Church there will reign Peter the Roman, who will feed his flock amid many tribulations, after which the seven-hilled city will be destroyed."
​
Kincaid notes that Pope Francis, although he came to Italy from South America, is of Roman descent. He was born Jorge Mario Bergoglio. And Kincaid concludes that "every Pope claims to be the successor to Peter."