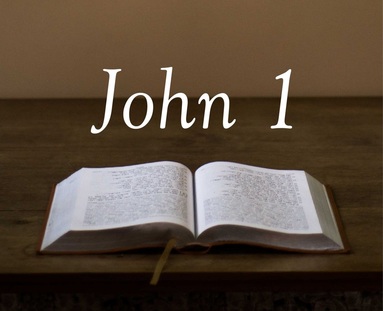 That Strange Introduction To John’s Gospel

During my years dabbling in the Christian faith I heard those opening lines in the Gospel of John read numerous times by various ministers and guest speakers. The words never made much sense to me but they were delivered with such reverence I just assumed that everybody around me understood what we were hearing and I kept my yap shut.

Now that I am a declared rebel among Christian ranks, I am daring to question the very sanity of the person who wrote those peculiar twisted words that sound strangely similar. Oh yeah….It’s in Genesis 1.

That first sentence in the first book in the Bible reads: “In the beginning God created the heaven and the earth. . .”

Now the opening lines of Genesis make sense. It tells us simply that there was a beginning point where the Creator produced the Universe and the planet Earth, and went about establishing all of the amazing display of suns, planets, moons and galaxies that are in constant motion. For the purposes of the Old Testament, since it was not a book of science, nothing further needed to be told. God just created the whole shebang and He did a pretty amazing job of it.

But the writer of the Gospel of John was apparently flying high on mushrooms or perhaps a dose of poppy tea when he scribbled the opening lines of Chapter 1. He tells us that in the beginning was the Word (with a capital “W” signifying God), then explains that the Word was “with God”, but also “was God.” And then he explains: “The same was in the beginning with God.”

So why not get to the point and say: In the beginning was God? Or was the writer trying to establish something magical in those opening lines?

Then in the next line, John 1:3, the writer states: “All things were made by him; and without him was not anything made that was made.”

Ouch. A sentence like that attacks my journalistic credibility. It is like scratching your fingernails over a blackboard. The sentence could have stopped with “All things were made by him,” and accomplished everything the writer intended to say. The remainder of the sentence contains such awkward phrasing that the creators of the canon should be ashamed of themselves for letting it slide.

To be fair we must remember that this very bad piece of literature is found in the King James Bible, an old English translation from the Greek text, so it is possible that verbiage and the very meaning of the text was twisted in an effort to maintain the original message as it appeared in Greek.

And while the author of the Gospel of John remains anonymous, there is something peculiar about how the Greek text from John was found carefully printed on the same papyrus, directly following the end verses of the Gospel of Luke. Bible scholars believe the Gospel of Luke was the first and oldest Gospel while John was the final one, written an estimated century after Jesus supposedly lived.

Some Bible scholars and early Christian tradition suggests that the Apostle John may have been the real author of at least part of the Gospel of John.

If there is any truth to John’s alleged authorship, we can perhaps excuse his awkward way of phrasing and writing the story. John, the son of Zebedee and Salome, and his brother James, were both fishermen when Jesus called them to be part of his gang of disciples. It would have been amazing if either of the brothers knew how to either read or write.

Most Christians, and especially the fundamentalists, argue that every word in the Bible is inspired by God. If there is any place in the Bible that grants any foundation for this argument, it has to be in the first sentence in the Gospel of John. It is here that John declares the “Word” as divine, the “Word” is “of God” and the “Word” IS God. And, there can be sufficient argument here that John’s reference to the Word is clearly a description of the Book.

The problem with this argument, however, is that the Bible as we know it today did not exist even at the time these words were found on parchment, which is believed to be sometime between 177 and 200 AD, nearly two centuries after Jesus lived. Some believe the text was written by followers of John, some of whom may have even known John in his old age, and that there were at least four different writers involved. The holy book prior to this was the Torah, the Hebrew books of the law found in the Old Testament.

It may also be interesting to note that the Gospel of John is the only one of the four Gospels that goes to great lengths to support the Christian doctrine of Incarnation. Thus the declaration that the “Word” found in the writings are not only “of God” but they are God.

The writer of John also draws from those first words in Genesis that speak of God creating light. John 1:4-5 reads: “In him was life and that life was the light of all mankind. The light shines in the darkness, and the darkness has not overcome it.”

If all this leaves you a bit confused, you are not alone. Perhaps that is the way the holy men of God are supposed to talk.