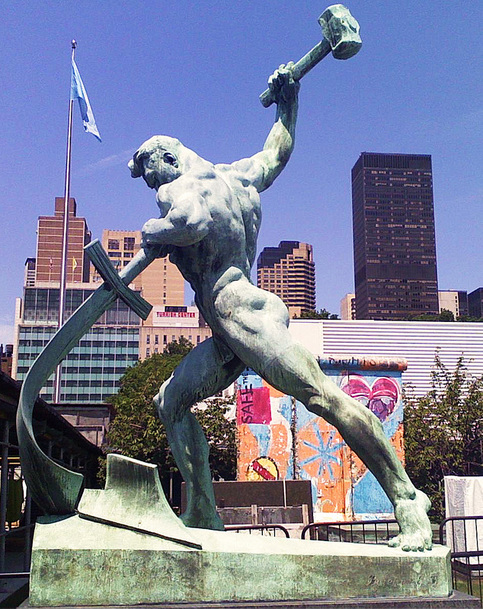 Longing For An End To War

The late President Franklin D. Roosevelt, who led the United States through the most turbulent war in world history, once said: "If civilization is to survive, we must cultivate the science of human relationships – the ability of all peoples, of all kinds, to live together in the same world at peace."

Roosevelt knew, as did most people in the world at the end of World War II, that humanity could not endure another great war of such magnitude. World leaders attempted desperately to head off further wars in 1918, after the first "Great War" was ended, by forming the North Atlantic Treaty Organization representing the nations of Europe and the Americas. Other nations got involved in this idea and thus emerged the United Nations. This was an alliance of the most powerful countries in the world. Both were attempts by governments to find a way to "get-along" and stop wars before they started.

It has not worked, of course. There hasn’t been another great war of global scale, probably because of a united fear of such a conflict leading into a nuclear disaster. But nations have remained consistently at "limited warfare" ever since the Second World War ended.

So why do we do this? Anyone who has served in the military and experienced real battle knows that war is not a video game. The late Union General William Tecumseh Sherman told the graduates of the Michigan Military Academy in 1879: "War is hell." After his involvement in one of the most deadly wars in United States history, Sherman knew what he was talking about. There is no glory in battle. It is a time of terrifying fear, killing and survival for every solder involved. No one returns from war without being in some way personally scarred.

Everybody says they want peace. Our political candidates call for it when they campaign for office. Our religious leaders ask their people to pray to God to grant it. The Old Testament prophet Isaiah promised that the day would come when "he shall judge between the nations, and shall rebuke many people: and they shall beat their swords into plowshares, and their spears into pruning hooks: nation shall not lift up sword against nation, neither shall they learn war any more."

If world peace is desired, what has prevented us from achieving it? The answer appears to be that humans have not learned how to love and get along with one-another. Look at the police log in any city on any day and you will find long lists of calls upon the officers to help solve domestic disputes, street gang fights, murders and various other acts of violence. We fight with our neighbors over noise pollution, violation of junk ordinances, border disputes and sometimes over silly issues not worthy of mention. Our children get bullied by gangs at school. Many Americans have loaded guns in their homes to "defend" against the outside world.

We call ourselves a civilized society but in truth, we still have a barbaric nature that lingers in us all. Until we learn to get this under control, we really are not civilized at all. We have only evolved one step above the ancient caveman who fought his enemies with spears and clubs. Now we do it with guns, knives and sophisticated military weaponry. Instead of killing one annoying person who has invaded our cave, we have the ability to destroy thousands at the push of a button.

This is why the invention of the atomic bomb has been such a metamorphic event in human history. That so many nations have such bombs places us all on the edge of disaster. All it will take is one military leader to push the wrong button in anger, launch such a bomb on another nation, and it could start a war that could destroy all life on Earth within hours, if not minutes. This is how close to the edge we have brought ourselves.

Humans still cling to old feelings of racial, religious and even territorial bigotry. We distrust anyone that does not look, dress or behave like us. And with so many different cultures, skin colors and religious belief systems in existence, it seems that it may be impossible for everybody to reach of common state of international love for and acceptance of one another.

The final factor in this picture is that war has now become very profitable for big business interests. Billions of dollars are made by the corporations that manufacture the many heinous weapons of war that we have invented. We recently posted a political "cartoon" that noted why America could not stop going to war. It is because war is the nation’s only remaining industry. That may be close to the truth. It may truly be the largest national industry.

How can we bring an end to this madness?

If we could correctly write our history books and teach our children the truth about past events, from an unbiased point of view, it would be a good start. If our children could understand how political and financial interests forced the Japanese into attacking our Navy at Pearl Harbor in 1941, how our top leadership allowed this attack to happen to help stir Americans out of an unwillingness to go to war against Hitler, and how we used propaganda to generate an unnatural hatred against both the Japanese and German people, we might acquire an understanding of how we were all goaded into that war. How interesting to note that both Germany and Japan are considered good allies to the United States today.

Today the propaganda machine is stirring distrust and anger against the Islamic people following a suspicious attack on the United States on 9-11. There is a false "War on Terrorism" going on that led us into unprovoked invasions of both Iraq and Afghanistan, and our military is still present in both countries. The bloodshed still goes on. And the only winners in these conflicts have been the big corporations who fed the war machine.

Are we not being duped by the big corporate-owned media machine into hating yet another race of innocent people who have done nothing to threaten us?

Notice how we were arch enemies of Russia during the Cold War, then we became comfortable with the Russians under President Mikhail Gorbachev, and now tensions are mounting under the leadership of former KGB head Vladimir Putin. Why is this? Is it because Putin has an alliance with Syrian dictator Bashar Hafez al-Assad, who is allegedly fighting a civil uprising to remain in power? What is the truth in this complex story?

Notice too how the Iranians are being portrayed as a potential new enemy because they are building nuclear power plants and there is a suspicion that Iran also wants to build nuclear bombs. Why is Iran considered more dangerous than North Korea, a nation controlled by an unpredictable dictator, portrayed as a sworn enemy to the United States and one that has already developed a nuclear bomb?

Do we really bear hatred in our hearts for all of the citizens of these great nations? Do we fear them? Or is it possible that we can love them? If we are to accept the concept that we are all one . . . that we are all part of the Creator of All Things who exists within each of us, how can we not love them?

The new transition that is about to occur on this planet . . . some have referred to it as ascension . . . will not be a miracle. The change which is already in progress is not likely to happen overnight. We perceive a slow and methodical shift and those of us who are actively involved are going to have to work hard to bring it about. The task calls for hardship, personal discipline, and giving up the materialistic lifestyle most Americans have enjoyed all of their lives. And as we have all learned from watching the news stories about the storms, earthquakes and other natural disasters, there will be a lot of death.

In the end, however, there is a promise of a paradigm shift into a new and higher level of thought. It will be a true step in the process of human evolution. And perhaps then we will have the ability to lay down our weapons and hammer them into plowshares. That is when the prophecy of Isaiah shall come to pass.