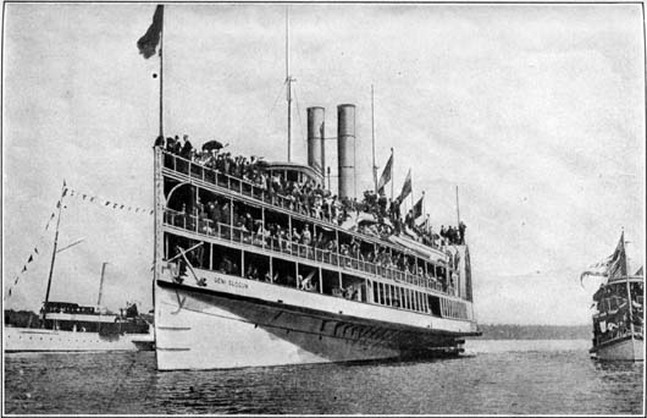 Irony can be found in the report that over 1000 members of a church picnic excursion perished in a fire aboard the steamship General Slocum as it sailed into a place called Hell Gate on the East River at New York City.

It happened on June 15, 1904. The Slocum, a tired 13-year-old side wheeler under the command of 68-year-old Captain William Van Schaick, was charted to take more than 1,300 members and friends of St. Mark's Lutheran Church on a Sunday school picnic at Locust Grove on Long Island Sound.

Within an hour after the Slocum began its ill-fated trip up the river, fire was discovered in a forward cabin where barrels filled with hay were stacked. The hay was used for packing in a shipment of glass a week before, but then carelessly stored in the cabin. It was theorized that a spark from the ship's stack or perhaps someone's pipe started the fire.

Whatever the cause, the General Slocum was quickly turned that day into a floating coffin of fire. Critics later said old disintegrating cork life jackets, rotted fire hoses that burst the moment they were put under pressure, an untrained crew and a failure by Captain Schaick to immediately run the blazing vessel into a nearby river bank contributed to the scope of the disaster.

Smoke and flames were discovered just as the General Slocum was passing Sunken Meadow, adjacent to Randalls Island in the Hell Gate. Witnesses said it seemed that within seconds the entire forward part of the ship was ablaze.

As the passengers, mostly women and children, rushed astern to escape the flames, Schaick failed to slow the vessel. Rather than cut the speed and turn toward shore, or stop to launch lifeboats, the captain maintained full speed ahead. The fire, fanned by the wind of the moving boat, fed on the dry painted timbers of the open deck, turning the ships superstructure into a fiery torch. Passengers and the 85 members of the crew were forced to jump overboard or burn.

Captain Schaick, who survived the fire, later told a board of inquiry that he was waived away from going ashore for fear of setting fire to nearby lumber yards and oil tanks. He said he also knew the river was lined with rocks and his vessel was bound to founder if it struck them.

Schaick drove the steamer directly upstream until it struck bow-on at North Brother Island, near a long-term care hospital facility. Unfortunately, there was no sloping shoreline so the vessel stopped with its burning hull rammed into the island while the rest of the hull was still floating in 25 feet of water.

People jumped overboard and were carried away by the force of the rushing river. By now the fire had destroyed any chance of launching lifeboats.

Tugboats and other water craft braved the flames in an effort to save lives. Some patients from the island infirmary were said to have pulled struggling women and children out of the water.

Still burning at its waterline, the ruined Slocum eventually got carried off in the current until it struck land at Hunts Point in the Bronx, about a thousand yards away. There the remains of the wreck smoldered for days. Divers searched for bodies in its sunken remains. Police and rescue workers searched the riverbanks for miles.

The ship's owners, captain and crew were demonized by the press. Captain Van Schaick was sentenced to ten years in prison for his part in the disaster but was pardoned four years later by President Taft.

Needless to say, the Slocum fire remains high on the list of America's worst disasters at sea. 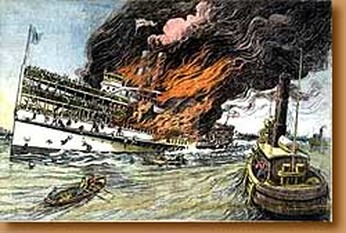