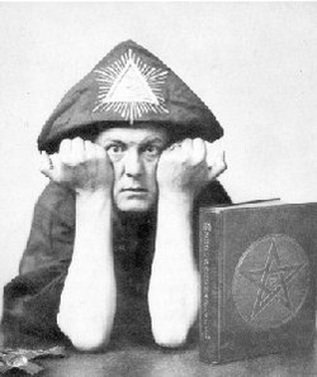 When students of Aleister Crowley pass correspondence to one another, they usually attach the letters L.V.X. at the bottom of the manuscript. As in all of the secrets from the world of the mystics, the meaning of the letters, or symbols, is deeply rooted in Qabalistic mysteries.

We once ran into a written walk-through this maze that explained the meaning of the letters. Understanding the reasoning behind each step, however, would take a few years of intense study on the part of an initiate, so we will not attempt to offer the volumes of paperwork that would be required to draft a full written solution. Thus the L.V.X. explanation, by an unknown author, is reproduced here:

Remember that a Latin "U" is written as a "V", so the word becomes "Lux", which means "Light". Light is the first object created ("Fiat Lux", the first words spoken by the Lord = "let there be light"); yet paradoxically it does not behave like a physical object, and this points toward the non-"objectiveness" of all other "objects". Light is also the fastest-moving thing, therefore it defines both the original essence and the ultimate limitations of this universe.

The nature of God according to the Qabalah is described in a trinary structure called "The Negative Existence," comprised of:
Ain,
Ain Soph, and
Ain Soph Aur.

Therefore the formula of God is threefold, consisting of varying degrees of pure light.  The second degree is in essence a denial of the first, and the third denies that, by extending through time.  The ancient Qabalists were forced to define divinity this way due to the paradoxes which inevitably arise in human minds when confronted with 4th and higher dimensional thinking -- this is what the Sepher Yetzirah (the seminal Qabalistic text) is all about.

These three letters also are Qabalistically and visually/formally linked to the principle dynamic structure of all Western Mysticism, that of the Death-Rebirth Cycle. According to The Hermetic Order of the Golden Dawn:

L == Isis Mourning (Osiris slain by Set)
V == Apophis Triumphant (the Rule of Death)
X == Osiris Risen (dead-yet-alive, to rule in the new order)
​
Many mystics go so far as to say that this cycle is the only dynamic evident in nature, as the direct interactions of all forces are governed by it.  Here we see two mutually-opposed forces which interact to create a new, "elevated" state or force.  This directly echoes Hegel's "Thesis-Antithesis-Synthesis" model, as well as Gurdjieff's "Law of Threes" and Buckminster Fuller's "60-degree zero-vector matrix." Similar structures literally permeate Western consciousness, lending further credence to the primacy of this dynamic. Obviously, we are not talking about literal death here, but rather as a metaphor for all sorts of dynamic and transformative processes.

Using all of this we come to a conclusion that the meaning of L.V.X. is a “wish” or “spell” by the writer that means: “May you die and be reborn in the limitless extending Light of Godhead.”

And there is a methaphorical meaning for non-members: “May you change and keep changing unto perfection.”

Indeed, all who follow a spiritual path are seeking the light of truth that leads to perfection. It is unfortunate that the Christian Church turned into a dark and misleading web that scooped the masses into its folly and forced the seekers of light into hiding for so long.
​
This, then, is the reason messages are so carefully coded and  difficult for the layman to understand.