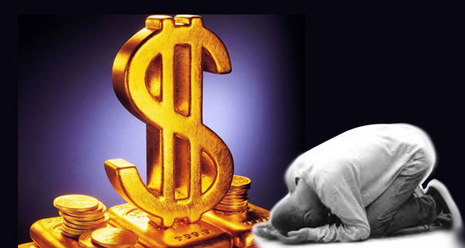 Writer Liza Vassallo correctly states that people have been conditioned to worship money. In fact the possession of money has literally become the real religion of the people. They believe that wealth brings happiness and fulfills all of life’s needs and desires. Failure to acquire money is regarded as tragic circumstances. Some people who lose wealth after enjoying it have been known to commit suicide.

Vassallo writes that people seem powerless to break away from this captivation even though the power of money exists purely in the mind. They can be driven to compete on their jobs, and even cheat and steal to get more and more money because they believe it gives them a sense of security.

Indeed, there was a time in America when money was made of real coins cast in silver and gold. Because a pocket filled with silver dollars or gold coins was very heavy, there was an advent of printed paper notes. At that time the government collected all of the gold and put it in a guarded vault at Fort Knox, Kentucky. Every printed paper dollar was marked as legal tender with its value backed by the gold.

After the bankers began manipulating Congress, and the Federal Reserve was created, the entire monetary system flew out of control. We experienced inflation because the Federal Reserve, which is not an arm of our government but was granted control of the money by Congressional action, began printing more paper money than we had gold or silver in Fort Knox to back up.

Not only this, but the United States began selling its gold reserves to other world nations to cover its debts. Now, because of the secrecy behind this whole issue, nobody knows exactly how much gold and silver is stored at either Ford Knox or another guarded vault deep under the Federal Reserve building in New York City.

What this means is that the value of the printed money we carry around with us, that we use to buy the things we want or need, and that we secretly worship, exists purely in our minds. As long as we believe the dollar has value, then the system works. If people ever wake up and realize just how worthless that piece of paper in their wallets really is, the entire American monetary system could collapse like a house of cards.

Thus our national monetary system is yet another part of the elaborate system of mind control being used on the masses. We are programmed to believe in its value, thus the value exists. The moment we no longer believe, the system will fall apart. There may or may not be enough gold reserves in those vaults to back up the money we use.

There is a little secret behind this strange and twisted faith in our money. As millions of Americans lose their jobs, get evicted from their homes, and begin learning to live without money, their values are beginning to shift. They are learning that life does not end when they are flat broke. Instead, neighbors start depending upon neighbors for support. People trade their talents for goods and services, thus rekindling the old barter system.

What is happening is that community living is coming back. People are now relying on one another to survive. With this comes the concept of love, gratitude and acceptance, things that were all but lost in our frantic quest for money. There is a wonderful discovery going on that money, while nice to have when its available, is not something to be worshipped.