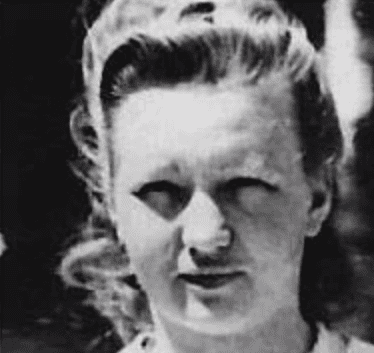 Among the wicked killers lined up during the infamous SS trials after World War II was Dorothea Binz, a hard-faced young woman known for her excessive cruelty in torturing and killing women prisoners at Ravensbruck.

In her book Lilac Girls, depicting the wickedness that occurred at that German concentration camp, author Martha Hall Kelly wrote: “Almost every memoir of Ravensbruck survivors I’ve read included at least one mention of Dorothea Binz. They cite her especially brutal enforcement of punishment in “the bunker,” the cell block where camp punishments were carried out.”

Kelly wrote that Binz liked to be observed kissing and carrying on with Edmund Brauning, a married camp worker, as the women around her were being beaten, tortured and killed by the guards working under her.

Survivors of the camp told how Binz beat, slapped, kicked, whipped, shot and stomped upon women with her heavy boots. The male officers liked her cruelity and quickly promoted her through the ranks until she became Chief Wardress. In addition to supervising the torture and murder of camp prisoners, Binz trained other woman as guards that went on to work on Auschwitz and other concentration camps.

One report said her “dedication to her work” as an SS supervisor was described by her fellow Nazis as “unyielding.” She would patrol the camp with a German shepherd dog on a leash in one hand, and a whip in the other. It was said she would unexpectedly select female prisoners and order them executed on the spot. Sometimes she chose to beat and kick them to death while the other prisoners watched.

She was a teenager, only 19 when she came to Ravensbruck in 1939 from a small farm and applied to be a guard at the camp. She was given a job in the kitchen at first, but was advanced to a position as a female overseer within the next month.

As the Russian army moved in on the camps, Binz fled Ravensbruck. She was captured by the British in Hamburg in 1945 and tried with SS personnel by a British court at the Ravensbruck War Crimes Trials.
​
She was convicted and hung on the gallows at Hamelin Prison on May 2, 1947. Her reign of evil was brief. She was only 27 when she was executed.