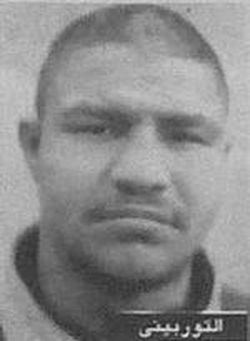 A popular name for Egyptian business places has recently been “al-Tourbini,” which means “The Express Train” in Arabic. For some twisted reason the popularity of the handle stems from the arrest, conviction and execution of one of Egypt’s worst serial killers, Ramadan Mansour.

Mansour was a gang leader convicted of raping, torturing and killing at least 30 homeless children that he lured aboard trains operating between Cairo, Alexandria, Qalyoubeya and Beni Sueif.

The children, mostly boys ranging from ten to 14 years of age, were taken to the roofs of the moving train cars where Mansour and members of his gang raped and tortured them before tossing them off the moving train to die or lie severely injured until found by locals.
Some of the children were thrown into the Nile River and others were buried alive, authorities said.

Mansour joined a rough Cairo street gang as a young boy where the rule of the street was to rape and murder anyone who threatened them or go to the police to report their crimes.

It is believed that Mansour’s first murder victim was Ahmed Negui, a 12-year-old boy who wanted to join the gang. When Mansour attempted to sexually assault him, Negui went to the police. Mansour was arrested but then released for lack of evidence. He retaliated in gangland style by raping and killing Negui.

Once he had committed murder, it appears that killing of children became easy for Mansour. He began operating on trains and in Alexandria, leading other gang members in the killing of homeless children between the years 1999 and 2006. That they chose train carriage roofs to do their crimes earned Mansour his nickname “al-Tourbini.”

The police in Alexandria began keeping a profile on Mansour and eventually closed in on the gang. Arrests were made in 2006 when two of the gang members were captured and confessed.

Mansour told authorities that he believed he was possessed by a jinn that commanded him to commit the crimes. Mansour and his accomplice, Farag Mahmoud were both found guilty of numerous murders and sentenced to death by a criminal court in 2007.