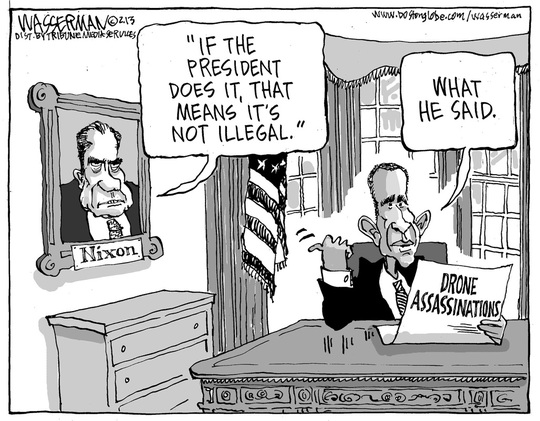 While he was still in office, former President George W. Bush created and signed the National Security and Homeland Security Presidential Directive 51. This directive, which has never been challenged by Congress, grants the president unprecidented powers in the event of a "catastrophic emergency."

The directive, known as NSPD 51, remains on the books. President Barack Obama has never acted to remove it.

The directive declares that when the president considers an emergency to have occurred, he will assume the authority to coordinate an "enduring constitutional government" which will be "a cooperate effort among the executive, legislative and judicial branches of the Federal Government." It states that in the event of such an emergency, all branches will cooperate with the president "as a matter of comity in order to protect the Constitution."

The legal twisting of wording in the directive gives the directive the appearance of being in compliance with the rules of the Constitution. But conservative activist Jerome Corsi and Marjorie Cohn of the National Lawyers Guild say they find the directive to be in violation of the Constitution because it gives the president executive power over the legislative and judicial branches on command. It gives only the president the power to declare a catastrophic emergency, but does not specify who has the power to declare a conclusion to the emergency.

The creation of the Bush directive was not reported by the media or brought before the Congress. Some believe it conflicts with the National Emergencies Act, a law passed by Congress in 1976 that grants Congress oversight over presidential emergency powers during catastrophic events.

If allowed to stand, some see the directive to be a revamping of the power of the president to allow the White House Military Office to assume a central role in creating a temporary "shadow government" to deal with a national crisis. That office with 2,300 workers, has existed for protecting and flying Air Force One. But under the directive it takes on added responsibilities as the lead agency in shepherding government leaders to that "secure site" at Mount Weather in rural Virginia.

Under the old plan, about 200 government officials were assigned to alternative offices to set up a working government under the direction of FEMA at Mount Weather in the event of a catastrophe. The new team eliminates officials from outside the White House and fills the offices with mostly White House civilian and military personnel, one report stated.
In other words, the president and his team has the authority to move the operation of the federal government to a secret underground facility on command.

Obviously some people have been concerned that the directive places too much power in the hands of too few people. They see the order as a move to give the president broader powers and thus upset the balance of power established by the Constitution.

The Bush directive didn't escape the attention of all of the media. Columnist Ron Rosenbaum studied the document calling it "weasel speak," designed to set up a possible false flag event and then give the president the authority to take over the operation of the nation.

Rosenbaum worried about the phrase "matter of comity" and asked "just what events of the legislative and judicial branches will be allowed to participate in executing constitutional responsibilities and providing for orderly succession and appropriate transfer of leadership?"
​
"In other words, who gets to call the shots?" Rosenbaum asks. "What does comity mean in this context? Informally, it means good-natured, good-faith camaraderie."

Rosenbaum worried that the directive by its very wording is too innocuous and fails to deal with procedures for certain unexpected emergencies like presidential succession in the event that the chief executive and vice president are killed.

The bottom line, according to Rosenbaum, is that the directive appears to lay the groundwork for the president to establish a coup and virtual take-over of the United States government.